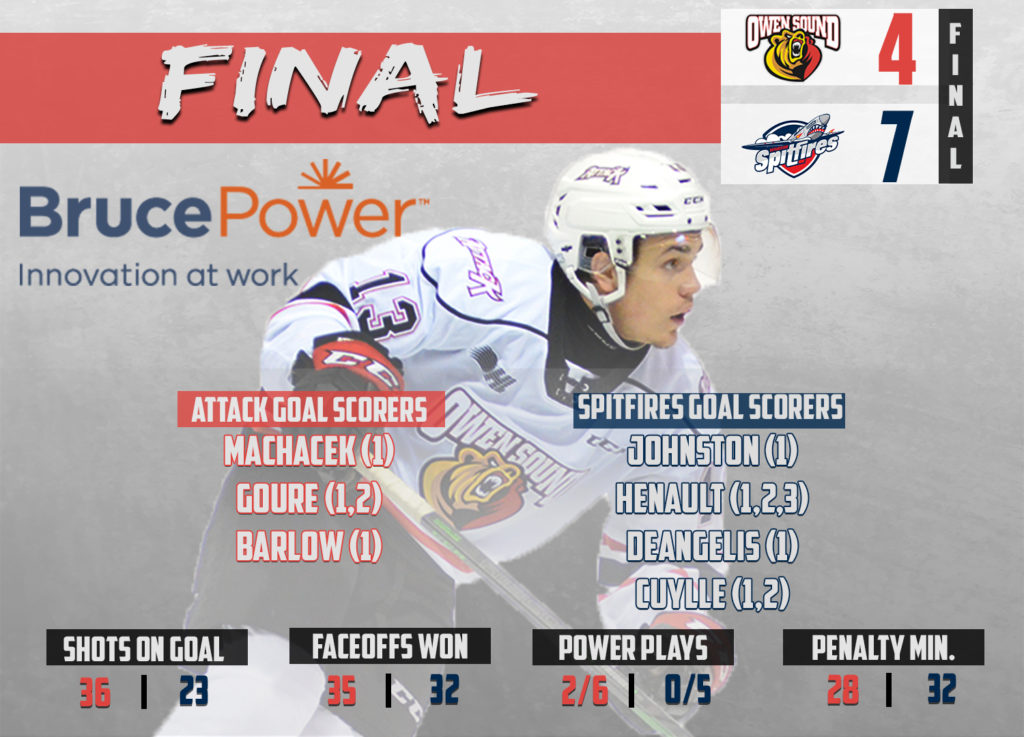 The Owen Sound Attack were in Windsor Thursday night to take on the Spitfires, falling 7-4 kicking off a 3-in-3 start to the weekend.

The game saw a pair of rookie goalies make their debut as starters, with Corbin Votary in net for the Attack and Kyle Downey opposing him in the Spitfires net.

Owen Sound came out firing, as they registered 13 shot on goal through the first 20 minutes of action, but could not solve the Spitfires rookie net minder. It was the opposite story for Votary in the Attack net as he only had to stop five shots, but had two more ring off the crossbar. Though the first period ended scoreless, it had its fair share of fireworks, as there were multiple skirmishes post whistles. Ultimately, the teams combined for 36 minutes in penalties during the opening 20 minutes of action.

It did not take long into the second period however, for the goose eggs to come off the board, as Windsor’s Wyatt Johnston took a pass in the high slot and wired a shot past Votary to open the scoring. A couple minutes after opening the scoring the Spitfires found themselves on a power play, but it was the Attack who took advantage on special teams. A strong forecheck by both Stepan Machacek and Servac Petrovsky forced a turnover, and it was Petrovsky finding Machacek all alone in front, with the Bears assistant captain showing his hands and patients sliding the puck past an outstretched Downey. The score would remain tied until just after the midway point of the period, were once again the teams would trade goals within a two minute stretch. First it was Windsor’s Louka Henault beating Votary with a quick shot, but the Attack quickly answered again with special teams. This time it was Deni Goure, playing a perfect give-and-go with Machacek down low, and his shots found a hole under Downey’s arm.

The start of the third period was just like the first two, with the score evened. It did not last long, as just over two minutes into the period it was Henault again with another quick shot that eluded Votary.  The Attack did not have as quick of response as they had earlier in the game, but were able to even the game with another power play marker, as it was once again Goure firing the wrist shot past Downey, tying the score at 3. Just under a minute later the Attack witnessed the Spitfires regain the lead, before Windsor captain Will Cuylle and Henault, broke the game open with under 10 minutes left on the clock. Henault’s goal gave him the hat trick, his team a three goal lead late into the game. Attack rookie Colby Barlow was not content throwing in the towel though, as he took a centering pass from Ethan Burroughs, and wired the one-timer past Downey, pulling Owen Sound with a pair of goals. Though the Attack pressed, trying to even the gam for a fourth time on the night, it was Cuylle potting one into the empty net for his second of the night, and sealing the game.

Owen Sound is back in action tomorrow night, as they travel to London for their third meeting against the Knights on the season. The Attack will then return home Saturday night for a rematch with Spitfires, as they will look for some revenge.