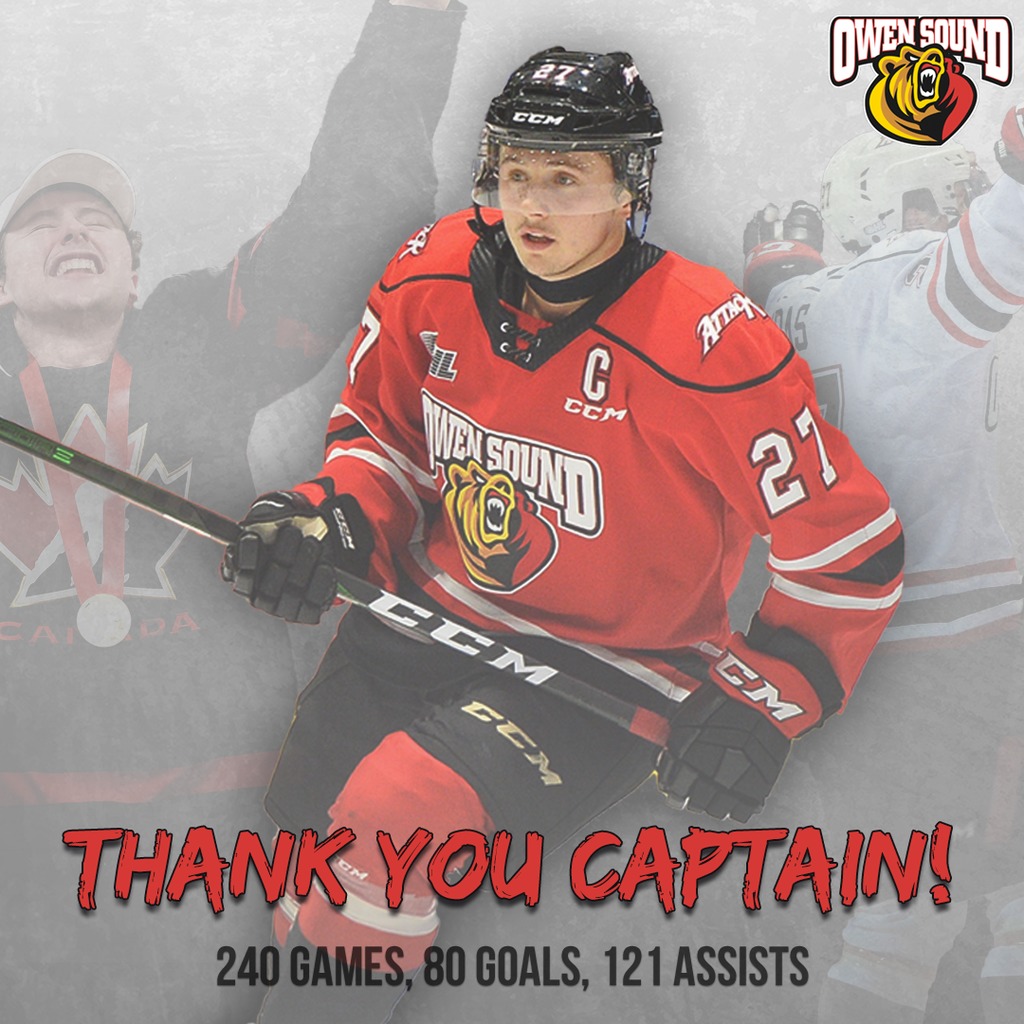 Owen Sound Attack Captain Aidan Dudas has been loaned to Eisbaeren Berlin of the DEL by the Los Angeles Kings. Dudas will play in the German capital until the AHL or NHL season begins.

The 20-year-old from Parry Sound was poised to return to the Scenic City for his fifth and final season in the OHL. Over 240 career games, the forward scored 80 times and added 121 assists, plus 15 points in 33 career playoff games for the Attack.

The 10th overall selection in the 2016 OHL Draft, Aidan Dudas went on to become one of the most beloved players in franchise history. The undersized centre quickly became a fan favourite through his hard work, determination and skill on the ice. In 2018, Dudas was drafted by the Los Angeles Kings in the 4th round, 113th overall. Prior to the start of the 2019-20 season, Head Coach Alan Letang named Aidan captain of the team. During the year, his strong two-way play was recognized by Hockey Canada, and he was named to Team Canada for the 2020 World Juniors in the Czech Republic. Playing a fourth line energy role and contributing on the penalty kill, Dudas and the team won gold over the Russians.

When reached in Berlin, Aidan Dudas said he cherished his time at the Bayshore: “My time in Owen Sound was something I’ll never forget. I wouldn’t have changed a thing about my junior career. Thank you to the organization, my coaches, my teammates, my billets the Pettigrews, and the best fans in the league.”

Head Coach Alan Letang reminisces about Dudas’ time in Owen Sound: “It’s hard to believe that 4 years has passed. I remember Aidan as a confident energetic young 16-year-old kid. The player he has developed into isn’t a big surprise. He has overcome hurdles, obstacles and doubts because of his work ethic, attitude and passion for the game. Night in, night out the fans of Owen Sound have seen this passion every time he touches the ice. He’s been the heart beat for our team for the last 4 seasons. It’s been a pleasure to coach him and I look forward to following his career.” Letang thinks moving to Germany is a great move for his former captain: “I’m proud and very excited for him. What a great opportunity for him. Berlin is an amazing city and a great organization. The DEL is a very undervalued league.”

The Owen Sound Attack would like to thank Aidan for his time and dedication to the franchise and the City of Owen Sound. We wish him the best of luck as he begins his professional career.