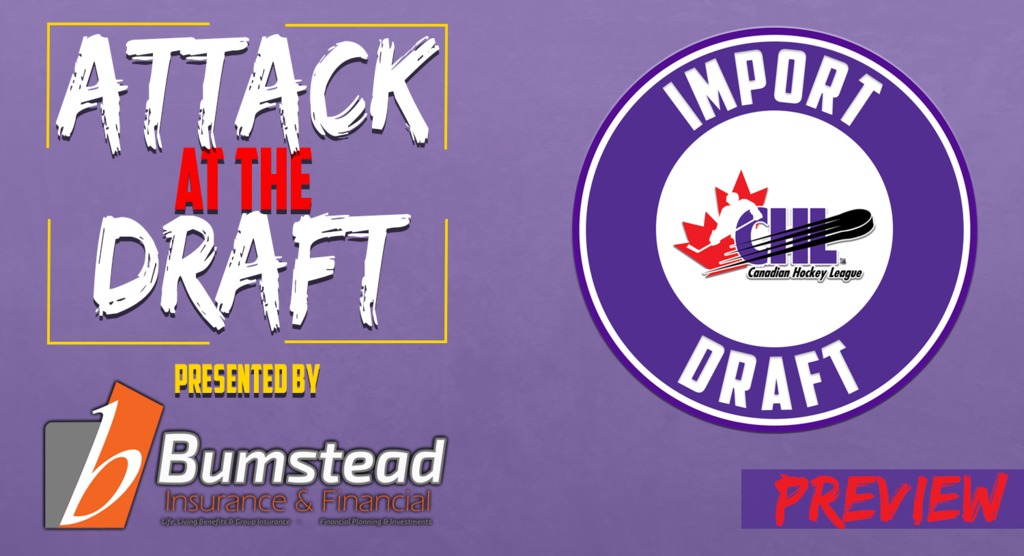 The CHL Import Draft is a two round draft that includes all 60 teams from across the Ontario Hockey League, Quebec Major Junior Hockey League and the Western Hockey League.  Teams are permitted to have two import players on their roster for a season, therefore, with teams having returning import players not all teams may use both picks in this draft.

The Baie-Comeau Drakkar from the QMJHL hold the drafts top pick, while the WHL’s Everett Silvertips will pick second followed by the Barrie Colts picking third.  While the Attack hold two picks in this draft, with Czech born Stepan Macachek expected to return to the scenic city in the fall, Attack General Manager Dale DeGray will only be utilizing one of them.

“The CHL Import Draft is another way of creating depth within an organization” said DeGray.  “We are looking to use our pick once again to accomplish this.  Moving forward, we hope the player select has the ability to be a top four defenceman or top six forward.”

Over the years the Attack have had some great success with the import draft.  Here is a snap shot of some of the most successful Attack import players.

Stefan Ruzicka, Right Wing, 3rd Overall 2003:  Ruzicka played 124 regular season games scoring 71 times and adding 71 assists, while in the playoffs he had 4 goals and 9 assists in 15 games.  Ruzicka was selected in the 3rd round, 81st overall by the Philadelphia Flyers in the 2003 NHL Entry Draft.

Andrej Sekera, Defence, 2nd Overall 2004:  Sekera played 102 regular season games scoring 28 times and adding 55 assists, with a plus-24 rating, while in the playoffs he had 5 goals and 12 assists in 17 games.  Sekera was selected in the 3rd round, 71st overall by the Buffalo Sabres in the 2004 NHL Entry Draft.

Artur Gavrus, Centre, 55th Overall 2011:  Gavrus played in 66 regular season games, scoring 23 times and adding 28 assists, while in the playoffs he had 3 goals and 5 assists in 13 games. Gavrus was selected in the 6th round, 180th overall by the New Jersey Devils in the 2012 NHL Entry Draft.

Damir, Sharipzyanov, Defence, 50th Overall 2013:   Sharipzyanov played in 179 regular season games tallying 19 goals and 52 assists with a plus-20 rating.  He participated in 16 playoff games, registering 2 goals, 6 assists and a minus-6 rating.  Sharipzyanov was picked up as a NHL free agent by the Los Angeles Kings in 2015.

Maksim Sushko, Left Wing, 29th Overall, 2016:  Sushko has played 114 regular season games finding the back of the net 48 times and adding 44 assists.  In the playoffs he has recorded 5 goals and 12 assists in 27 games.  Sushko heard his name called at the 2017 NHL Entry Draft by the Philadelphia Flyers, being selected in the 4th round, 107th overall.

The 2021 CHL Import Draft will kick off at 11:00 a.m. on Wednesday, June 30th online at chl.ca/draft.  Get all your Attack information by following Attack at the Draft presented by Bumstead Insurance and Financial on the Attacks social media feeds and by visiting attackhockey.com.

Attack at the Draft: NHL Draft Preview
6 days ago