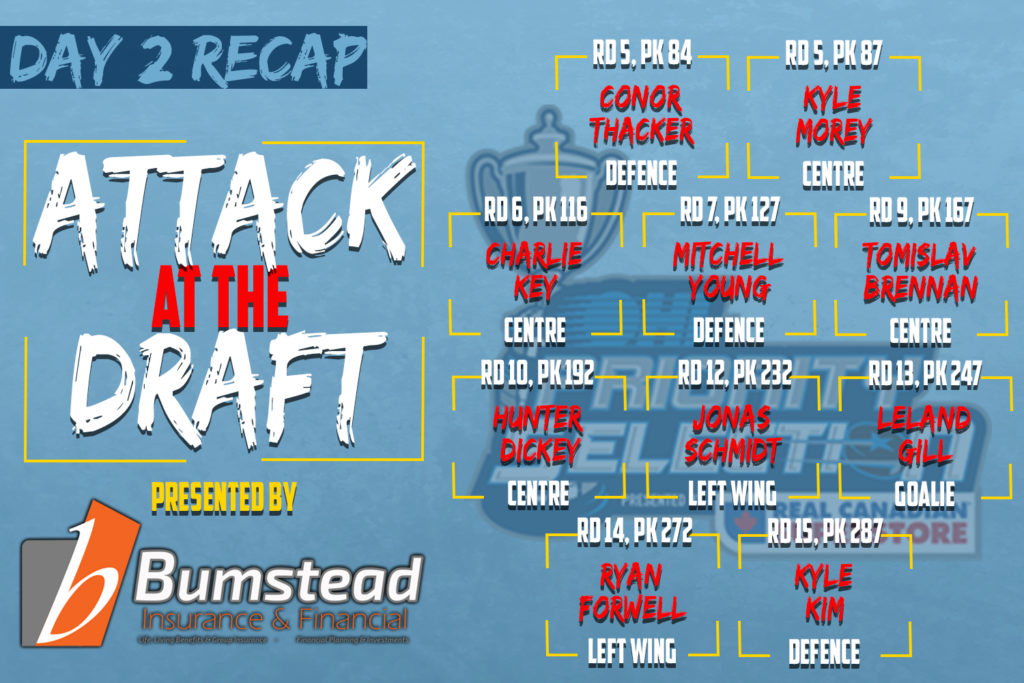 The Owen Sound Attack had another successful day at the 2021 OHL Priority Selection presented by Real Canadian Superstore.  With their 10 picks on day two, the Attack took six forwards, three defensemen and one goalie.

Conor Thacker is a six-foot-three-inch, 205-pound left handed defenceman from the Oakville Rangers program.  The native of Oakville, Ontario is a big strong defenceman that plays a physical game and can make it hard for opposing forwards to be effective in his end.

“Conor is a player that will make life difficult for opposing players in his own zone” said Attack Head Scout and Director of Player Development Sean Lafortune. “We envision him becoming a physical stay-at-home type defenceman that makes very smart decisions with the puck.”

Kyle Morey is a five-foot-eleven-inch, 155-pound, centreman from the Kitchener Rangers minor hockey program.  The native of Kitchener, Ontario is a two-way centre with great hockey sense.

“Kyle has quite impressive skill and hockey sense” said Lafortune.  “He works really works hard away from the puck.”

Charlie Key is a five-foot-nine-inch,149-pound, centreman from the Ajax-Pickering Raiders program.  The native of Ajax, Ontario is an offensive player with a very high compete level and possesses strong puck skills with great hockey sense.

“Charlie drives the offense on every line he plays on and plays bigger than his size” said Lafortune.

Mitchell Young is a six-foot-one-inch 170-pound left handed defenceman from the Waterloo Wolves program.  The native of Waterloo, Ontario is a two-way defenceman with impressive foot speed and hockey sense.

“Mitchell uses his great foot speed, skill and hockey sense to be a threat at both ends of the rink” said Lafortune.

Tomislav Brennan is a five-foot-eleven-inch 165-pound centre from the Ottawa 67’s minor hockey program.  The native of Ottawa, Ontario is bigger offensive forward who competes hard down low.

“Tomislav has good hands around the net and uses his size and compete level to win pucks down low” said Lafortune.

Hunter Dickey is a five-foot-nine-inch 155-pound right winger from the Rochester Coalition hockey program.  The native of Buffalo, New York is a good offensive player who drives play in the offensive zone.

“Hunter is a goal scorer with a quality shot” said Lafortune.  “He competes hard for the puck which generates opportunity for himself and his teammates.”

Jonas is a five-foot-ten-inch 160-pound left winger from the Waterloo Wolves program.  The native of Waterloo, Ontario had played AA hockey up until the 2020-21 season.  He is a highly skilled character player that never quits on pucks.

“Jonas is a very creative highly skilled forward that uses his strong hockey sense to create in the offensive zone” said Lafortune.  “We truly feel he has some untapped potential.”

Leland Gill is a six-foot 145-pound goalie from the Brantford 99ers.  The native of Brantford, Ontario is a big and mobile and moves well within his net.

“Leland plays a positional sound game and uses his size and mobility to his advantage” said Lafortune.

Ryan Forwell is a five-foot-eleven-inch, 164-pound left winger from the Waterloo Wolves program.  The native of St. Clements, Ontario is a competitive winger who uses his foot work to retrieve pucks down low and is a threat around the goal area.

“Ryan has very good feet that allow him to compete for every puck and be in good position” said Lafortune.  “He has good hands that make him dangerous in the goal area.”

Kyle Kim is a six-foot-three-inch, 170-pound defenceman out of the Detroit HoneyBaked program.  The native of Northville, Michigan is a very strong defender who is smart and skilled with the puck.

“Kyle is a highly rated American defensemen that is smart and skilled with the puck” said Lafortune.  “He projects to be a top pairing d-man at our level.”

On day two, the Attack were once again able to stick to their list with players they had identified remaining available to them in each round.

“I think it was fantastic weekend for us.  We got lots of skill, speed, kids with some size and lots hockey IQ.  I can see a number of kids playing our jersey in the next couple of years” said Attack General Manager Dale DeGray.  “With all the mystery going into the draft, the whole organization has to feel pretty good with what we were able to accomplish over the past two days.”

Attack at the Draft coverage is presented by Bumstead Insurance and Financial.  Up next for the Attack brass is the OHL Under-18 priority selection which will take place on Wednesday, June 9th beginning at noon.  Follow the Attacks social media feeds and visit attackhockey.com for updates.