Attack at the Draft – U18 Draft Recap 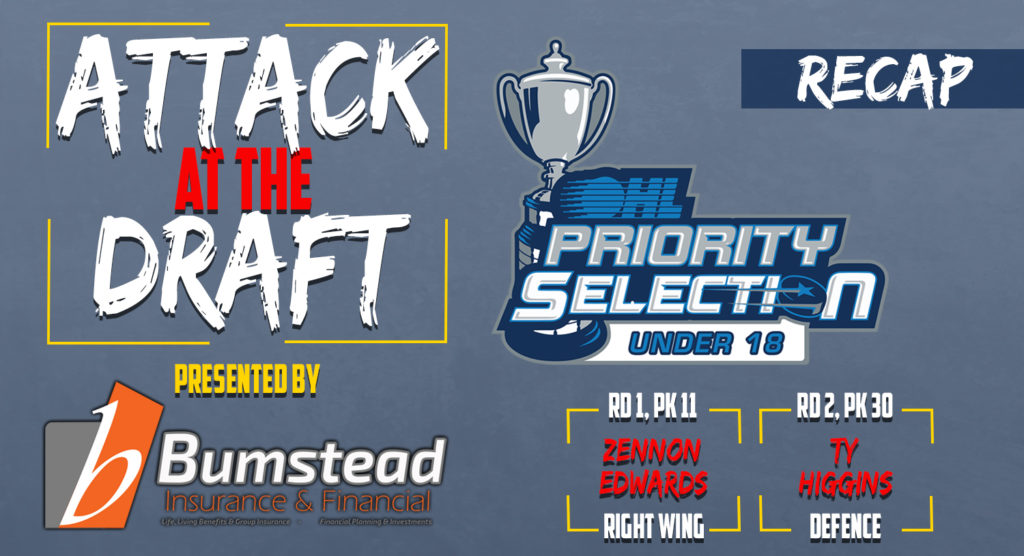 Zennon Edwards is a five-foot-nine-inch, 165-pound right winger out of the Whitby Wildcats U18 AAA program.  As a minor midget player, the native of Whitby, Ontario had 25 goals and 17 assists in 35 regular season game in 2019-20.

“Zennon is a competitive skilled forward with a nice ability around the net” said Attack Head Scout and Director of Player Development Sean Lafortune.  “He has gained a lot of strength and sprouted seven inches over the past year which will make it easier for him to compete at the major junior level.”

Higgins is a five-foot-eight-inch, 157-pound right handed defenceman out of the Waterloo Wolves U18 AAA program.  As a minor midget player, the native of Shakespeare, Ontario had eight goals and 12 assists in 33 regular season games in 2019-20.

“Ty is a smart puck moving defender who made some nice gains over the last 12-months” said Lafortune.  “He got bigger, stronger and harder to play against, all things that will allow him to be more successful at the major junior level.”

The use of the under-18 draft is an area of pride for the Attack organization, whom continues to utilize the draft to build its team.

“Since its inception we have utilized this draft to add depth throughout the organization and we have done so again today with the selection of Zennon and Ty” said Attack General Manager Dale DeGray.  “Both players will definitely bring that added depth with Zennon being a skilled quick forward and Ty being a steady puck mover with some grit on the backend.  We would like to welcome both players to the Attack organization.”

Attack at the Draft coverage is presented by Bumstead Insurance and Financial.  Up next for the Attack brass is the CHL Import Draft which will take place on Wednesday, June 30th beginning at 11a.m.  Follow the Attacks social media feeds and visit attackhockey.com for updates.