Attack Bounce Back with big win on Hockey Day 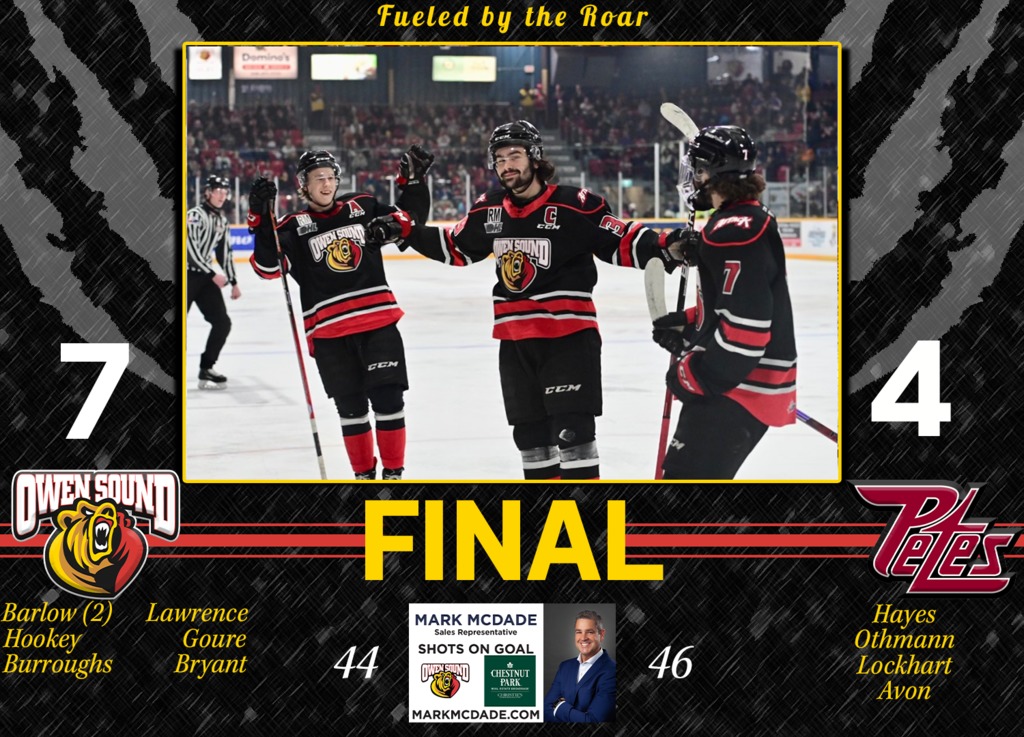 It was a perfect rebound game for the Owen Sound Attack, as they used a three goal second period to claim a big 7-4 victory over the visiting Peterborough Petes on Saturday night. The game capped off a perfect week of festivities for Hockey Day in Canada, as the city of Owen Sound was featured across the country.

It was a weird start to the game, as just over a minute into the action Attack forward Ethan Burroughs thought he had opened the scoring, but the puck had deflected out off the post. It was all around an unfortunate play for Owen Sound, as teammates began to come in and celebrate with Burroughs, thinking they had scored, but while the Attack were distracted the Petes went down the ice and Avery Hayes would bury the breakaway chance to give the visitors the 1-0 lead.

The home team wasn’t trailing for long as captain Colby Barlow swept home a nifty backhander just under two minutes later to pull the game even. Barlow needed just another two minutes to put his team in front as his one-timer off a Burroughs pass found the twine and sent the Bayshore into a frenzy.

Brennan Othmann, who the Attack know well from their playoff series against Flint last year, would bring the game back even with just three minutes left in the opening frame.

As the teams skated to a 2-2 first period, the second period was all Attack and it started in the net as net minder Corbin Votary made a couple big saves early in the period to keep the score even. Owen Sound then broke through when Kaleb Lawrence banged home a loose puck off a Matthew Papais net drive. The line of Lawrence-Papais-Landen Hookey would strike again about six minutes later, as it was Hookey directing a point shot on net, that eluded the Petes goalie to extend the Attack’s lead to two goals.

Deni Goure would seal the period with a goal of the night candidate, as he received a pass net front, before going between his legs and roofing the shot to make it a 5-2 Attack lead going into period three.

The final frame saw the teams go back an forth, as the Attack went into a defensive game trying to hold their lead. The defence held for 12 minutes, but it was J.R. Avon tipping home a power play marker to pull the Petes back within a pair. Watching their lead shrink it took Owen Sound just under two minutes to restore their three goal lead, as Burroughs chipped home a for sure goal this time, to make it a 6-3 game.

Peterborough would again pull within a pair, but Gavin Bryant sealed the Attack win with an empty netter with just 30 seconds left on the clock.

Owen Sound rounds out their busy weekend as they welcome the league leading Ottawa 67’s to the Bayshore. The game is an IPC Sunday game, as a skate with the team will follow the action. Tickets for the game can be purchased at the MacVicor and McComb Sutton Realty Attack Box Office by calling 519-371-7452 or going online at tickets.attackhockey.com.