Attack Fall to Sting, as Comeback Comes up Short 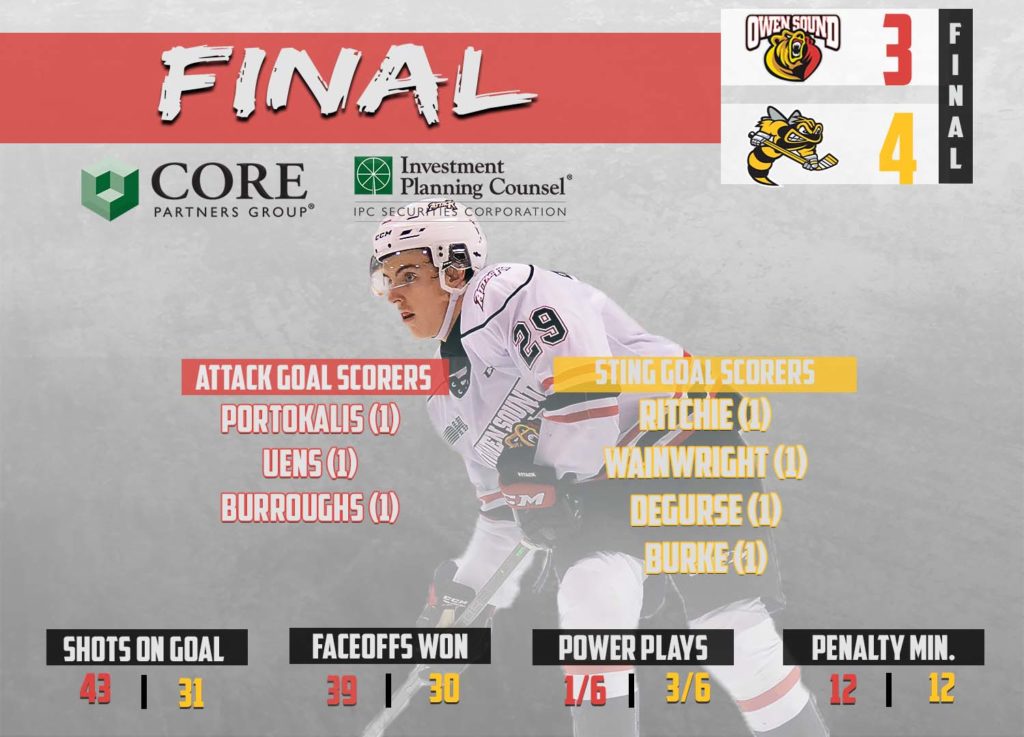 If you looked at the score you would think it was a tight back and forth game between the home Owen Sound Attack and visiting Sarnia Sting, Sunday afternoon. It was the Sting that claimed a 4-3 win, but it was far from a back and forth game.

Having just met in Sarnia two nights ago, one would think that the two teams would be familiar with each other. That was far from the truth as the game started tentative, as though the teams were feeling each other out.

That all changed when the Sting were awarded a power play just before the mid-way point of the period. After winning the draw and controlling the puck, it took the visitors just eight-seconds to find the back of the net and open the scoring. Sarnia would double their lead toward the end of the period, off a broken play, when rookie Easton Wainwright chipped in his first career goal over the shoulder of Attack goalie Corbin Votary.

The home Bears came out strong in the second period, and were able to get some quality looks on Sting goalie Anston Thornton, but could not one by him. Sarnia would capitalize on another power play, their second of three power play markers in the game, to make it a 3-0 lead heading into the final 20 minutes.

As mentioned Sarnia would net a third power play goal, just over two minutes into the final frame, to claim a 4-0 lead.

It looked like Thornton had the Attack’s number all game, making some quality and timely saves to frustrate the Owen Sound shooters. The goose egg was broken when veteran forward William Portokalis took a bank pass on the right wing and entered the Sting zone with speed. Having backed off the defender, Portokalis then ripped a shot past Thornton’s glove top corner to put the home Bears on the scoreboard, and ruin the Sting net minder’s shutout bid.

Rookie defensemen Cal Uens would pull the Attack to within two, with just over five minutes left on the clock. Some controversy came with Uens’ goal, as Portokalis was pushed into the net by a Sting defender, but was able to vacate before the shot came, which gave Thornton time to and the ability to make a save, per the referee’s discretion.

The final five minutes was a flurry of action as the Attack poured on the pressure, trying to pull within a goal. As the Sting got called for a tripping penalty, it was Ethan Burroughs, who dug the puck from a scrum in front, before flipping it over a sprawled Thornton, that brought the Attack to within a goal.

As the clock wound down, the tension ramped up, as Sarnia was again called for a penalty, with just over a minute left on the clock. Owen Sound would push, and pressure for the equalizer, but some stingy defence by the Sting kept the Attack from getting pucks through to the net.

Owen Sound will now have a few days of rest before a 3-in-3 this weekend, starting Thursday night as they visit the Barrie Colts for the team’s third meeting since the calendar flipped.