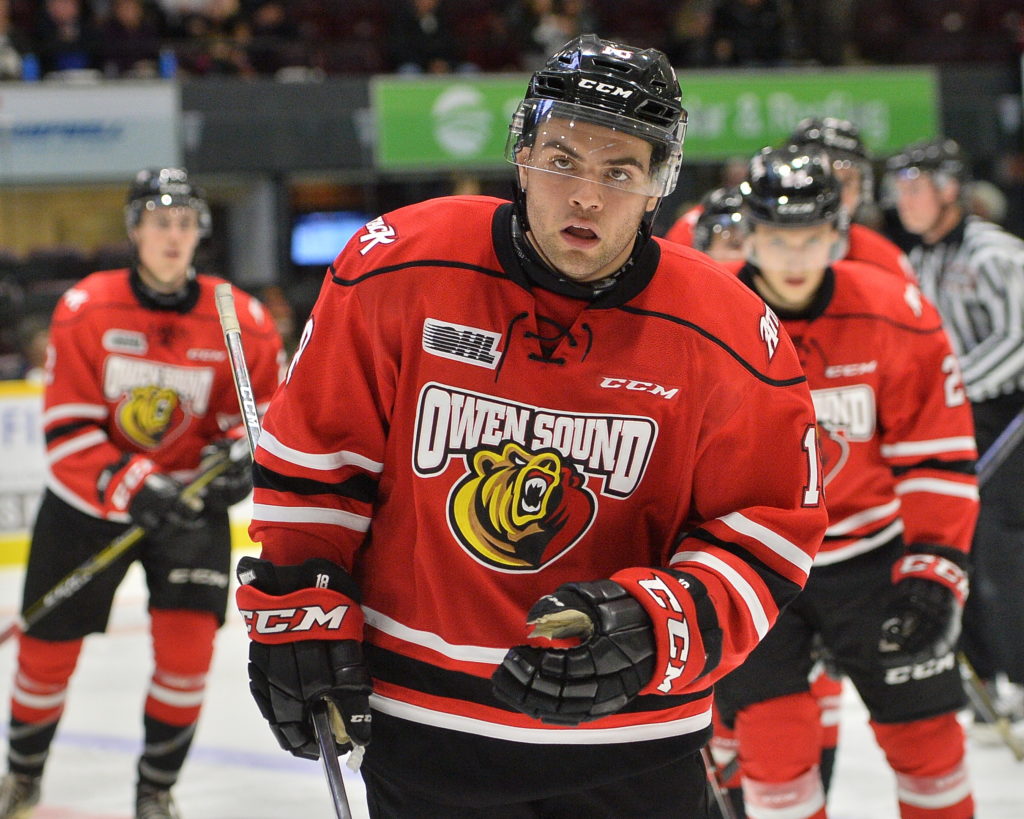 The Owen Sound Attack headed down to Budweiser Gardens tonight to face the London Knights for the first time since sweeping them in the 2018 playoffs.  Although Owen Sound controlled the first two periods, not allowing a goal for over 40 playing minutes, the Bears were not able to hold on in the third allowing 4 unanswered goals and fell to the Knights 4-1.

The first period started out with Owen Sound in control, and the Bears had a huge opportunity 4 minutes in, but London netminder Jordan Kooy made a big save to keep the game scoreless.

Nick Suzuki landed an early penalty for high sticking, sending London to their first powerplay of the game at 4:29.

While they are on the penalty kill, Owen Sound came together and Maksim Sushko made a beautiful play, handing the puck back to Aidan Dudas for a wide-open net and put the score up 1-0 Attack at 5:26. Markus Phillips also assisted the play.

Kevin Hancock got caught hooking and gave London another powerplay chance at 9:18, but the Knights are unable to capitalize.

The Bears were sent to their first powerplay of the game when Knights William Lochead got called for a check to the head at 15:04, but London were able to hold them off.

Mark McDade Chestnut Park shots on goal at the end of the first period sat at 13 for Owen Sound, and 8 for London.

The second period started with Knights Luke Evangelista heading to the box for hooking at 2:53, sending the Attack on another powerplay.

Rather than capitalize on the man advantage, Maksim Sushko headed to the box for holding at 4:20 sending the game to 4 on 4 hockey for 33 seconds.  Following the 4 on4 play, the Knights headed to their third powerplay of the game.

Mack Guzda showed fans what he is made of and made a massive save when Jacob Golden took a shot on net.  In the crease, Kevin Hancock took a penalty for slashing at 6:43 and the Knights were off to another powerplay.

Only 31 seconds later, the game headed to 4 on 4 hockey once again as Knights Cole Tymin landed a penalty for check to the head at 7:12.  The Knights were on a brief penalty kill after Hancock leaves the box and held off the Attack to keep the score 1-0.  Kaleb Pearson heads to the box at 11:o8 for slashing, sending the Knights to another powerplay where they were unable to find the back of the net.

Although the second period remained scoreless, the Knights held control with the puck in their attacking end for most of the second half of the period.

Mark McDade Chestnut Park shots on goal for the second period were 6 for London, 13 for Owen Sound.

The Knights did not waste any time in the third period as Connor McMichael sends the puck past Guzda at 1:06 into the period to tie the game up at 1-1.

A lot of action in the Owen Sound attacking zone as the Knights were 3 on 1, took a shot at Guzda who bounced it away and Groulx sent Jacob Golden into the net which was knocked off.

The Attack sent the Knights to their sixth powerplay of the game as Daylon Groulx headed to the box for cross checking at 1:54.

The Bears got a massive chance as Aidan Dudas bounced the puck off the back of Knights netminder Jordan Kooy, but it did not cross the line.

Connor McMichael had a shorthand breakaway but failed to find the back of the net as the puck bounces off the skate of Guzda.

Just over halfway through the third, Nathan Dunkley squeaked the puck past Guzda and the post and the Knights took the 2-1 lead at 12:10.

Hancock and William Lochead got into a tussle in Knights territory and both headed to the bench for roughing to take the game to more 4 on 4 hockey at 12:28.

Liam Foudy found the back of the net at 15:34 to make it 3-1 Knights late in the game. Foudy’s goal was assisted by Cole Tymkin and Alex Turko.

Aidan Dudas got hit with a high stick in front of the Knights net and Billy Moskal was sent to the box for a 4 minute penalty at 18:48.

Guzda headed to the bench and Attack have an empty net, taking advantage of the powerplay and making it 6 on 4.  Knights powered through an Liam Foudy records his second goal of the game on the empty net, sending the final score to 4-1 London.

The Hatten Home Hardware Building Centre Hardest Working Player of the Game was Kevin Hancock, voted by the fans.

At the end of three, Mark McDade Chestnut Park shots on goal were 43-25, in favour of Owen Sound.

The Attack are back in action on tomorow night when they host the Oshawa Generals for a 7:30pPM puck drop at the Harry Lumley Bayshore.

Tickets are available at the MacVicar & McComb ReMax Attack Box Office, which opens at 12NOON Saturday, Oct 6th, online at www.attackhockey.com, or by phone at 519.371.7452.