Attack Come Up Just Short In 5-4 Loss To Spirit 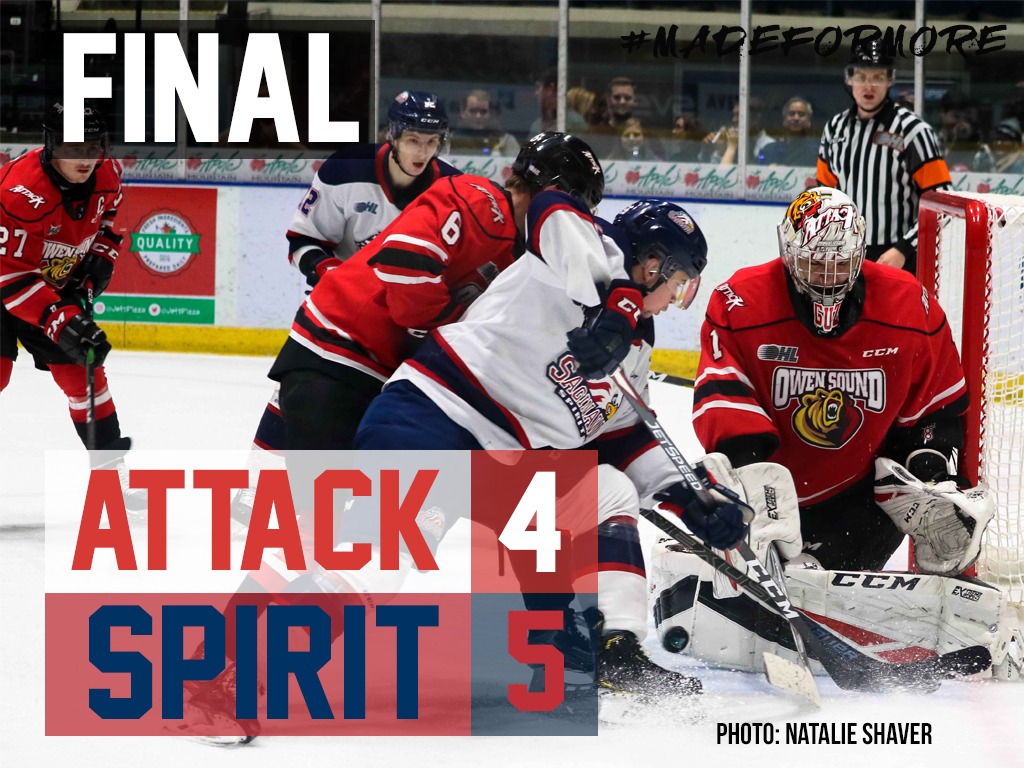 The Attack headed south on Thursday night to meet the Saginaw Spirit for the first time this season. The Michigan road trip poised to be a litmus test for the Bears just past the quarter mark of the season. The Spirit, the Flint Firebirds and the Windsor Spitfires are all top tier Western Conference teams this season and are all difficult opponents playing in their home rinks. In the past five years, the Spirit hold a 5-3-0-0 record over the Attack, and Owen Sound was looking to rebound from a challenging 3 in 3 last weekend. Mack Guzda received the start for Owen Sound and Tristan Lennox got the nod for the home team at the Dow Center.

The game began late after some travel issues for Owen Sound, with the puck dropping at 7:15 p.m. Despite the late arrival, the Attack came off the bus ready to play. Aidan Dudas opened the scoring just 20 seconds in with the first shot of the game. Sergey Popov rolled around the right wing boards, fed Dudas in the slot and the LA Kings prospect fired it past Lennox for the early 1-0 advantage. A few minutes later, the Spirit claim they scored after Guzda made a tremendous pad save. The referees initially called it no goal, but upon further review the game was tied 1-1. The two teams would exchange power plays near the end of the frame, but neither could capitalize and the score would remain tied 1-1 at the end of twenty minutes. Owen Sound led in shots on goal 10-9.

The second period started out the opposite of the first, with Saginaw getting the early goal. 2020 NHL Draft Top Prospect Cole Perfetti added his second of the game less than a minute in and the Spirit had their first lead of the game. Owen Sound couldn’t get it back, and Saginaw continued to add to their lead. Three goals in a five minute span expanded the advantage to 5-1 and the Attack found themselves in a hole. Stepan Machacek met defenseman Connor Punnett for a fight with just over five minutes remaining in the period looking to motivate the team, and it worked for Kaleb Pearson. 11 seconds later, the St. Marys native scored his 5th of the season to cut the Spirit lead to three. Attack captain Dudas almost scored in the dying seconds of the period after a great individual effort, but Lennox turned him away and after forty minutes Owen Sound would need a big jump in the third period to overcome the 5-2 deficit. Shots on goal after 2 were 23-22 for the Attack.

Owen Sound came into the final period looking to make a big comeback and earn their first victory at the Dow Center since 2012. Down 5-2, it wasn’t going to be an easy task but Al Letang had his players ready to go in the third. After holding Saginaw off the board for the first ten minutes, Adam McMaster struck on the power play after making a nifty pass to himself off the sideboards for his 7th of the year to make it a 5-3 game. With two minutes remaining, Owen Sound received another opportunity that quickly became a 5 on 3 chance. Just as the first minor expired, Sergey Popov scored his 5th of the season to cut the deficit to 1 with 30 seconds remaining. Unfortunately, the Attack couldn’t find the 5th goal and would fall to the Spirit 5-4 in regulation. The final shots on goal were 31-29 in favour of Saginaw.

The Owen Sound Attack continue their road trip with a game against the Flint Firebirds on Saturday night. You can tune into the game on 560 CFOS Bear Radio or stream it on OHLLive.com.