Attack Double Up Spitfires in a Western Conference Showdown 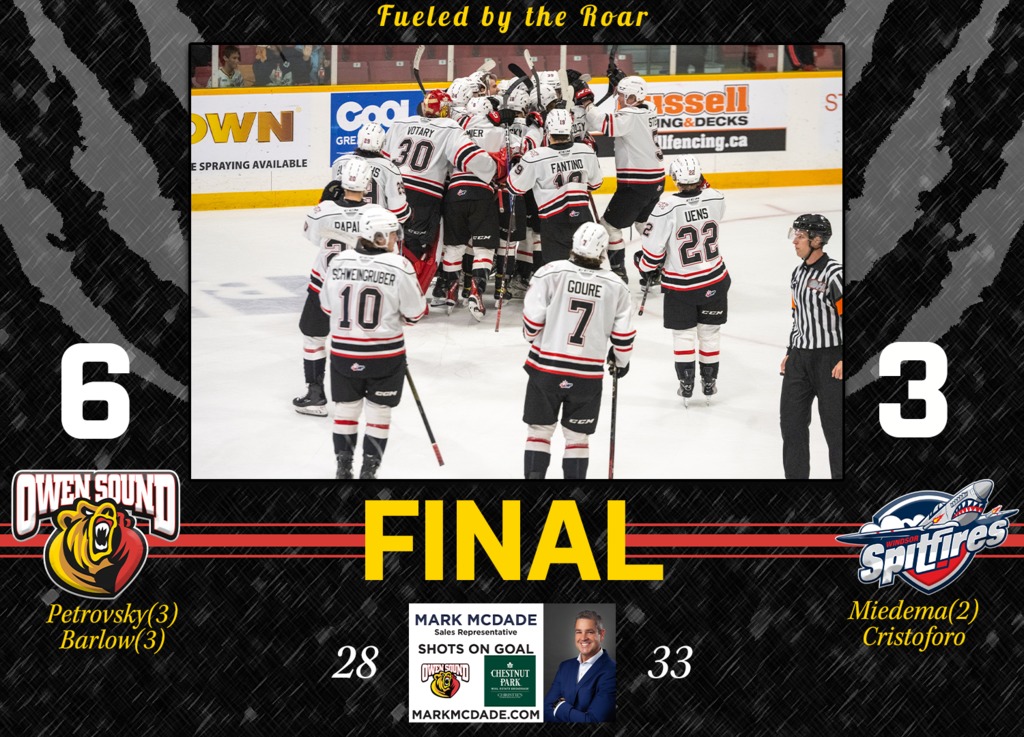 The Owen Sound Attack travelled to Windsor for a showdown of top western conference teams on Wednesday night.   Thanks to a pair of hat tricks by Colby Barlow and Servac Petrovsky, the Attack came out victorious doubling up Spitfires 6-3.

The Attack got off to a fast start, imposing a solid forecheck in the early stages of the game which resulted in Petrovsky first goal of the night just under two minutes into the first period. The Attack continued their offensive pressure creating numerous chances but were unable to increase their lead.  The Bears 6th ranked penalty kill was firing on all cylinders in the first period killing off a pair of minors.

The Attack continued to push the pace and apply pressure in the second period and were rewarded just under seven minutes in, when Barlow and Petrovsky tallied two goals just nine seconds apart to make it 3-0 for the visitors.   A couple of minutes later Barlow made it a 4-0 game when he finished off a nice pass from Matthew Papais.  Spitfire Forward Ethan Miedema got Windsor on the board with five minutes to go in the period when he finished off a two on one.  Before the end of the period, the Attack captain would complete his second hat trick of the season off a great passing play from Deni Goure and Ethan Burroughs restoring the Bears four goal lead, 5-1.

The Spitfires came out strong in the third period, forcing the Attack to spend more time defending.   Windsor would be rewarded for their efforts with a pair of goals from Anthony Cristoforo and a power play marker by Miedema. With the Attack lead cut in half, overage goalie Nick Chenard stood tall in the Bears net closing the door the rest of the way, while Petrovsky added his third of the game on a late empty net marker to make it 6-3 for the Attack. The Attack’s power play that has struggled as of late, seemed to rebound going a perfect 2-for-2 on the night.

Next up for the Attack is a home and home series with the rejuvenated Guelph Storm.  The Attack will head to the Sleeman Centre on Friday night, before returning to the Bayshore for a Saturday night tilt in the Scenic City.  Saturday’s game is Toys for Tots night presented by 101.7 the One and Cool FM 94.5.  Members of the Owen Sound Fire Department will be on hand collecting new unwrapped toys or monetary donations for their toy drive.

Tickets are still available for Saturday’s game and can be purchased at the MacVicar and McComb Sutton Realty Attack Box Office, by calling 519-371-7452, or online at tickets.attackhockey.com.  Fans can watch all Attack games on Rogers TV Grey CountyChannel 53 or  stream it on CHLtv/OHL Live or listen to road games on 560 CFOS Bear Radio.