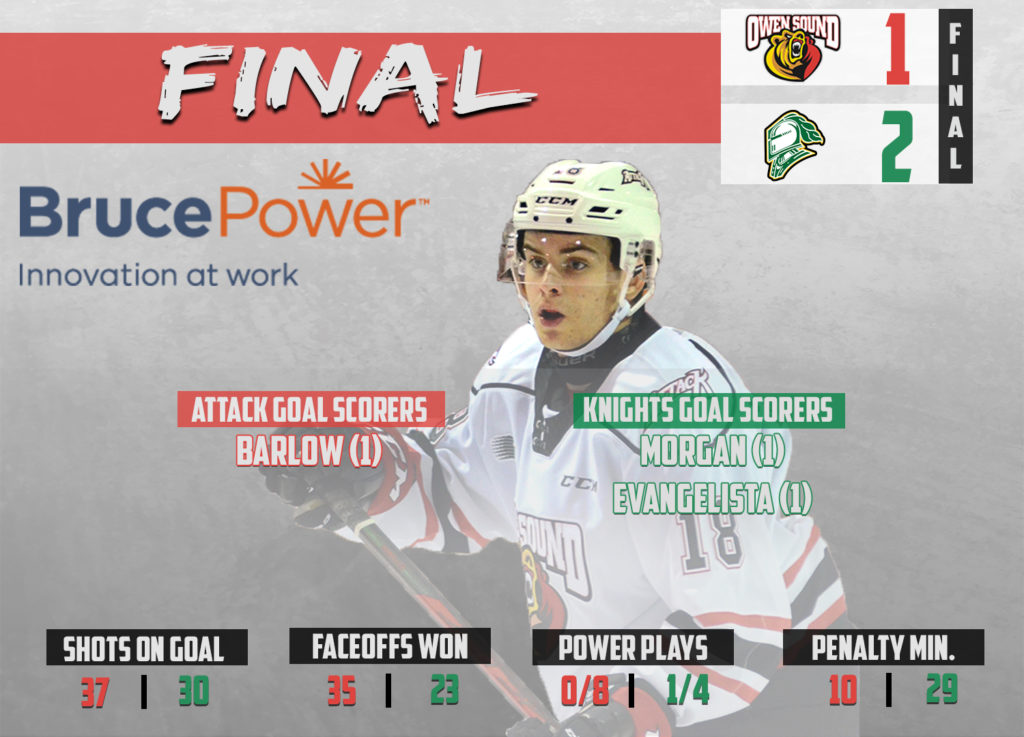 For the third time in the young season, the Owen Sound Attack and London Knights faced-off, with a Friday night contest in London. Much like the first two games, Friday night was another tight contest with the Knights squeaking out a 2-1 win.

The game followed a similar script to the first two, as it was a tight, hard hitting contest between the two Mid-West division rivals. Owen Sound came out hungry, hemming the Knights in their own zone for much of the opening frame. The Attack’s pressure granted them with three power play opportunities, but the Bears failed to cash in with the extra man. London began to flip the ice toward the Attack end late in the first period, but veteran goalie Mack Guzda stood tall and kept the game scoreless heading into the intermission.

Owen Sound began the second period down two men, with penalties carrying over from late in the opening frame. It was late into the second penalty when the Knights were able to take advantage with the extra man, as they out-manned the Attack on top of the crease, eventually banging home a loose puck to open the scoring. Owen Sound stayed calm and kept their focus, after giving up the opening goal, and were rewarded just a fw minutes before the half-way mark of the period. After killing off a penalty, Andrew Perrott went for a skate, driving the puck deep into the Knights zone, before finding Gavin Bryant on the face-off dot. Bryant froze all Knights players with a fake shot before finding an open Colby Barlow, who deposited the puck into the open cage to even the game 1-1.

The teams would go back to playing a stale mate to round out the middle frame, but it was Owen Sound who found themselves on a power play to begin the third period, after the Knights got called for a bench minor at the end of the second period. The Attack thought they had taken the lead while on the power play, after Deni Goure fired a rebounding puck into the empty net with Knights goalie Brett Brochu diving around in the crease. The goal however, was called back with a goalie interference called against Attack forward Stepan Machacek. Just 20 seconds after the disallowed goal, Knights captain Luke Evangelista found himself on a breakaway short-handed, and slide the puck between Guzda’s legs to give London the 2-1 lead. Owen Sound could never fully recover from the quick change of events early in the period, as they looked a bit out of sorts.

A scary incident took place around the five minute mark of the third period, as Attack captain Mark Woolley was shoved from behind after an icing call, sending him hard into the end boards. Woolley would get up on his own power, but was held out of the rest of the game for precautionary reasons.

Owen Sound will wrap-up their 3-in-3 tomorrow night, as they return to the Bayshore for a rematch against the Windsor Spitfires, who beat the Attack to open this stretch Thursday night in Windsor.