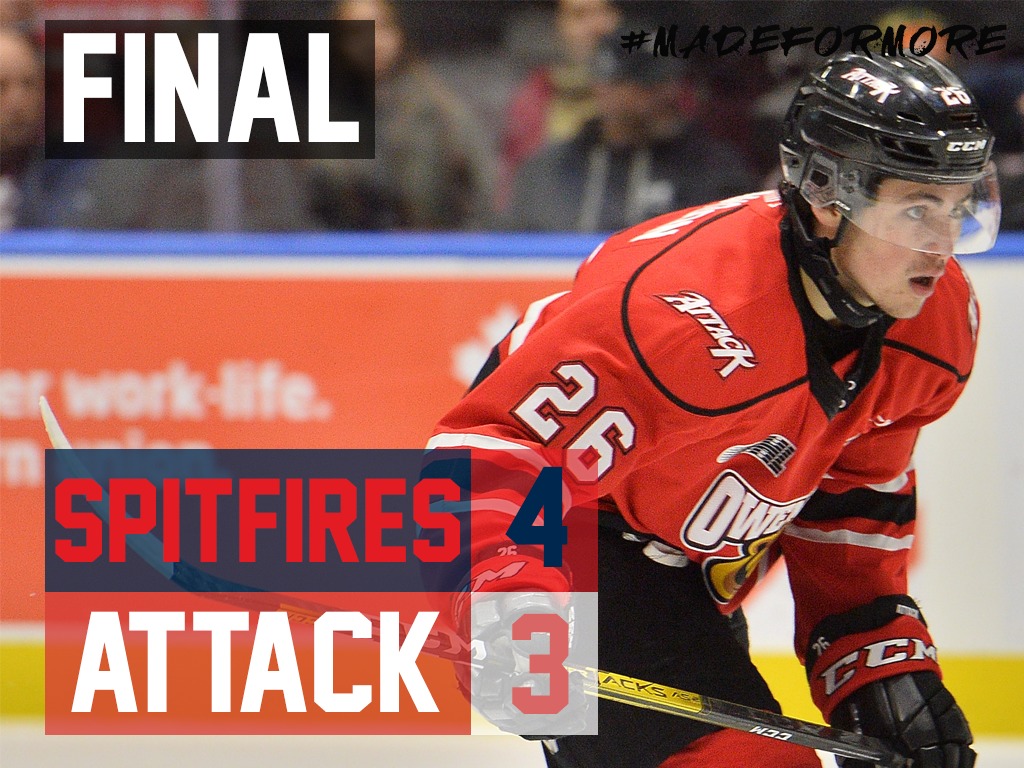 The Attack visited the Windsor Spitfires on Sunday afternoon hoping to stop a miniature slide over the past ten days of November. After almost tying the game late against Flint but coming up short, Owen Sound was motivated to earn points against the top team in the Western Conference. Mack Guzda received his 3rd start in 4 days and Kari Piiroinen got the nod for Windsor.

Windsor had the majority of the early chances in the 1st period, hemming the Attack in their own zone for the first five minutes. Guzda stood tall, turning away multiple shots until Owen Sound began to push back. Josh Samanski stripped the puck from a Windsor skater in the offensive zone, made a good move to feed it over to Kaleb Pearson and the St. Marys native buried it for his 6th of the season and a lead six minutes in for Owen Sound. The Attack continued to do a good job in the Windsor zone, taking the WFCU Centre crowd out of the game. It was silent at the rink until Connor Corcoran scored on a power play opportunity to tie things at 1. Two minutes later, the Bears had their own opportunity on the power play and after some good puck movement from Andrew Perrott and Aidan Dudas, Brady Lyle one timed his 6th of the season past Piiroinen to regain the lead. After the first 20 minutes of play, Owen Sound was up 2-1 but behind in shots 14-8.

The Attack started off well in the period that has been their enemy lately. Owen Sound managed to control the pace of play for the first few minutes, forcing Piiroinen to make multiple big stops to keep the score at 2-1. The Attack even managed to ring one off the post but couldn’t find the twine. Windsor would get another power play opportunity, and would score on the chance thanks to a shot from Tyler Angle to even the score up once again. 11 minutes into the frame, Pearson gained the zone and laid it off for Barret Kirwin. For the second time in two nights, Kirwin had eyes in the back of his head as he left the puck on a tee for Matt Philip who wired it home for his 12th of the year and a 3-2 lead for Owen Sound. Alas, the Attack couldn’t escape from the period with the lead as Windsor struck shorthanded with less than a minute to go to tie the game up once again at three apiece. Owen Sound outshot the Spitfires 17-7 in the period, and were ahead 25-20 in the game.

Two streaks were at stake in the third period. If Owen Sound won in regulation, their own losing streak would be over while snapping Windsor’s points in twelve consecutive outings. Kari Piiroinen continued to be big in the Windsor net, stopping multiple Attack chances including a great play from Deni Goure to set up Daylon Groulx in front of the goal. Both teams would exchange power plays at the halfway mark of the period, but neither team would convert. Despite another Windsor power play late in the game, Owen Sound was able to kill it off and with some timely saves from Mack Guzda the Attack earned a point and would head to overtime against the Spitfires. Shots after regulation were 35-34 in favour of the Spitfires.

Teams exchanged chances through the first few minutes of overtime, with both sides earning shots on goal. Physical play marked the extra time with Matt Philip laying a big hit after being hit a few seconds earlier. With less than 90 seconds remaining, Jean-Luc Foudy got a lucky bounce off Guzda with the puck barely crossing the goal line to earn the win for the Spitfires. Shots on goal ended 37-36 for the Spitfires.

The Owen Sound Attack are back in action on Friday as they stay on the road to meet the Rangers in Kitchener. Puck drop is scheduled for 7:30 p.m. The Attack return home Saturday night to meet the Saginaw Spirit. Tickets are available at the MacVicar & McComb Sutton Sound Realty Attack Box Office and online.