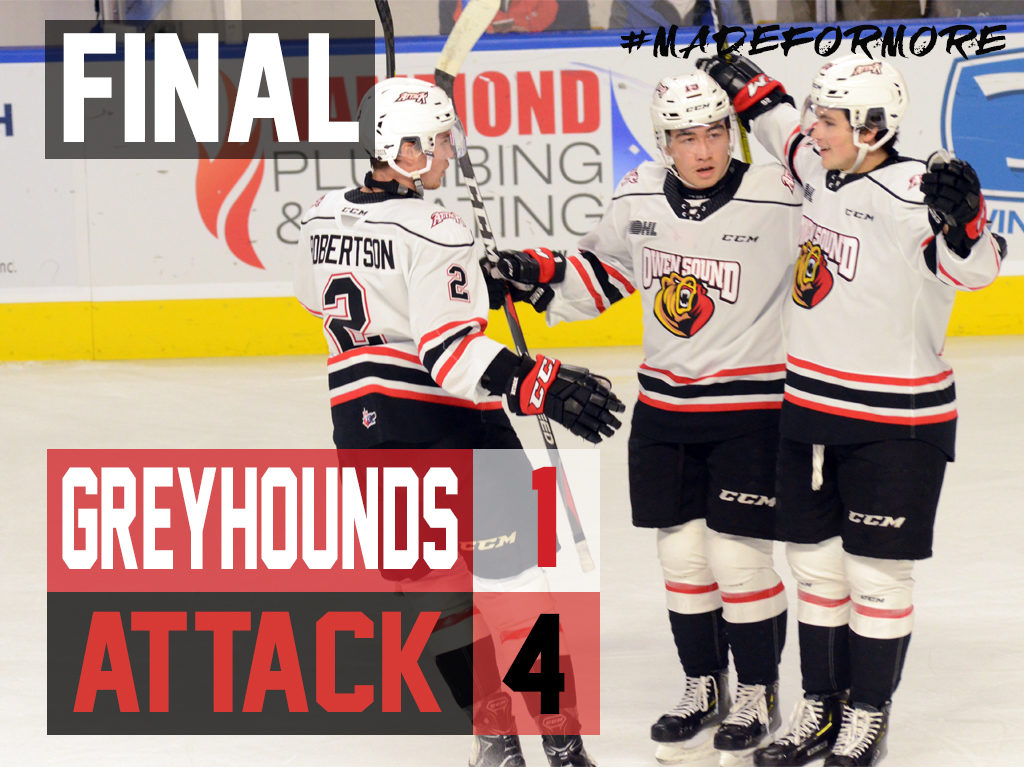 The Owen Sound Attack hosted the Sault Ste. Marie Greyhounds tonight in a battle between division leading teams. The Attack lead the Midwest Division with a 5-2-0-1 record while the Greyhounds come into town with a West leading 5-2-0-0 record. The teams are familiar foes, having met the last three years in the playoffs. The Attack come into tonight’s game with a season best 3 game winning streak while the Greyhounds won last night in Guelph by a lopsided score of 7-1. Mack Guzda earned the start once again after his 47 save performance in London. Ethan Taylor was the pick for the Greyhounds crease.

Play got underway in front of a full crowd at the Bayshore shortly after 7:30. The Attack had the first shots of the game, but Taylor turned them away. Five minutes in, the Greyhounds went to the man advantage for four minutes after a double minor for high sticking. With the man in the box, Owen Sound was forced to defend heavily in their own zone and keep the puck away out of the net. Guzda was up to the task and kept the Hounds off the scoresheet through the period, making 14 saves in the frame. The Attack received their first power play opportunity of the game after Andrew Perrott was hauled down in the offensive zone, but with just 30 seconds left in the period they couldn’t get anything done before the horn sounded and the first 20 was complete.

The Attack began the 2nd on the power play, but couldn’t find the back of the Soo net. A breakthrough finally happened 3 minutes into the period when the same pair opened the scoring as last night in London. Barret Kirwin passed the puck from behind the net to Ethan Burroughs in the slot and the rookie roofed it past Taylor for his 3rd of the season. Play settled down after Burroughs’ opener, but the Attack still held the majority of the possession. Past the halfway mark, Daylon Groulx streaked down the middle of the ice and fired a blast through the Greyhounds netminder to double the Attack’s lead with his 5th of the season. The Attack continued their stellar play in the 2nd and with less than two minutes remaining in the period, Matt Philip’s forecheck led to Kirwin all alone in front of the net and he made no mistake to score his 3rd goal in 2 nights and extend the Owen Sound lead to 3-0. The shots on goal were flipped in the period, with the Attack recording 13 in the frame and the Greyhounds managing just 4.

Opening the third, the Attack wanted to keep the Greyhounds off the board and their lead intact. Jaden Peca would ruin the Attack’s plans as he scored his 4th of the season just two minutes in, giving Sault Ste. Marie life. Owen Sound continued to smother the Greyhounds offense, keeping them pinned into their own zone for much of the first half. Matt Philip continued the Attack’s excellent shooting in the game with a beautiful wrister from the top of the circle to give the Attack a 4-1 lead with just under ten minutes to play in the game. The Greyhounds continued to push back, but Guzda stood tall for the third time this week, denying the Greyhounds any opportunity to claw their way back in.With just minutes to play, after the Soo pulled their goalie, Burroughs found himself shooting on an empty net but he couldn’t get the final insurance marker after drawing a penalty on the play. The Attack would finish the game in control, notching their 4th win in a row with a 4-1 final over the Greyhounds.

The Owen Sound Attack are back in action next Saturday at home against Quinton Byfield and the Sudbury Wolves. Tickets are available at the MacVicar & McComb Remax Attack Box Office and online. Puck drop is scheduled for 7:30 p.m.