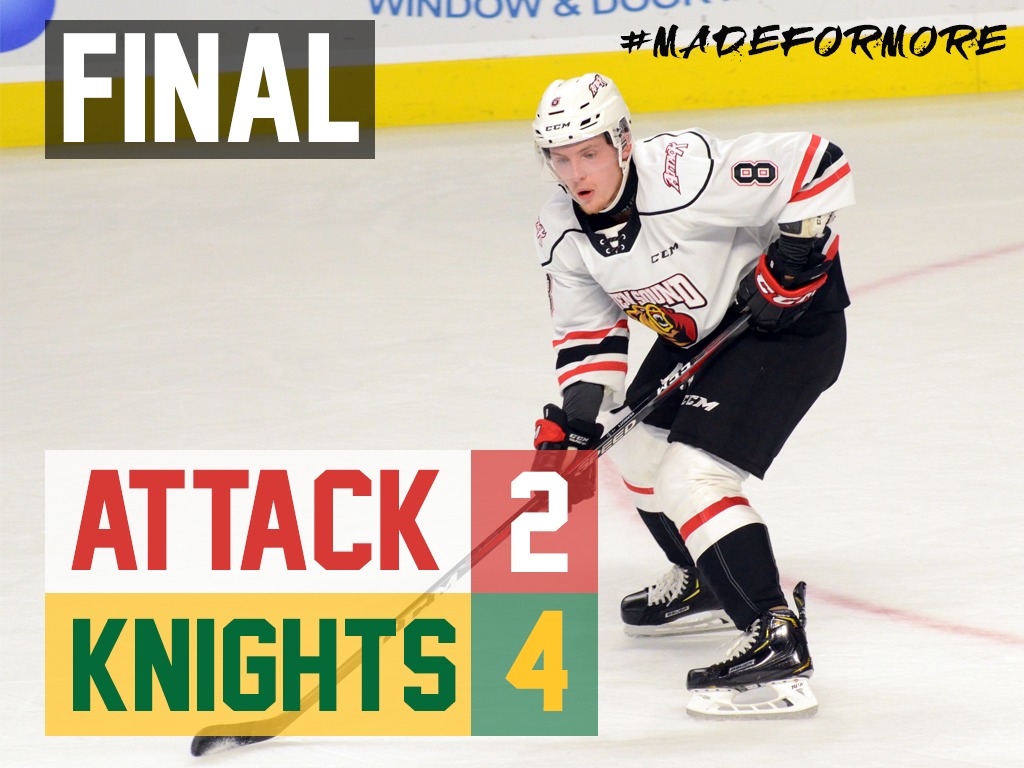 The Owen Sound Attack welcomed the London Knights to town for Military Appreciation Night at the Bayshore. Wearing special camouflage themed jerseys for the occasion, the Attack were donning the new garb to be later auctioned off in support of the Royal Canadian Legion. 100% of jersey proceeds will go to the local Owen Sound Legion branch, with the auction beginning in December. It was also Woolley’s Warriors night at the Bayshore, a night for Attack defenseman Mark Woolley’s foundation. The purpose of the night was to raise money to send kids to D-Camp, a camp where kids can learn how to live and succeed with diabetes. Mack Guzda got the start for the Owen Sound Attack, while Dylan Myskiw received the start for the Knights.

The 1st period got off to a poor start for Owen Sound and London were able to convert on an early power play less than two minutes into the game to get an early 1-0 lead. Attack captain Aidan Dudas wouldn’t let that lead last for long, and just a few minutes later he received a pass from Adam McMaster, went backhand and found the back of the net through Myskiw’s five hole to tie the game at 1 apiece. Unfortunately, London scored two more before the end of the period. Connor McMichael continued his hot streak after forcing a turnover at the Attack blueline and scored on a breakaway, and the Knights got another on the powerplay with Alec Regula scoring his 7th of the season. The Attack pushed back to end the period and put up 18 shots in the frame but headed to the intermission down 3-1.

As the second period began, the Owen Sound Attack came out of the locker room determined to cut into the Knights lead. After the first ten minutes of the period, the Attack had piled up 12 shots on Myskiw to just three for London on Guzda. They couldn’t crack the Knights netminder, but the atmosphere in the Bayshore was beginning to improve. The crowd was getting behind the Bears and cheering with every shot on goal. The period would come to a close with Owen Sound ahead in shots 33-29, but trailing on the scoreboard 3-1.

Owen Sound started the final period of regulation in desperate need of a goal to get things close. Down 3-1 to the Knights, the Attack needed a win to remain atop the Midwest Division. Guzda and Myskiw had both been perfect since the first period, despite both teams racking up over 40 shots with five minutes remaining in regulation. It wasn’t until there was less than four minutes to play that Igor Chibrikov found himself alone in the slot. Sergey Popov fed it to him nicely and Chibrikov made no mistake picking out the top right corner to cut the deficit to one. Coach Letang would pull the goalie for the final 90 seconds, but the Attack couldn’t find the tying goal. London would get an empty net goal to decide the game by a final score of 4-2.

The Owen Sound Attack are back in action tomorrow afternoon against the Erie Otters at the Bayshore. Puck drop is scheduled for 2 p.m. Tomorrow is an IPC Sunday, and fans are invited to skate with the team after the game. Everyone taking part in the skate must be wearing skates on the ice, and children under the age of 18 must also have a helmet on.