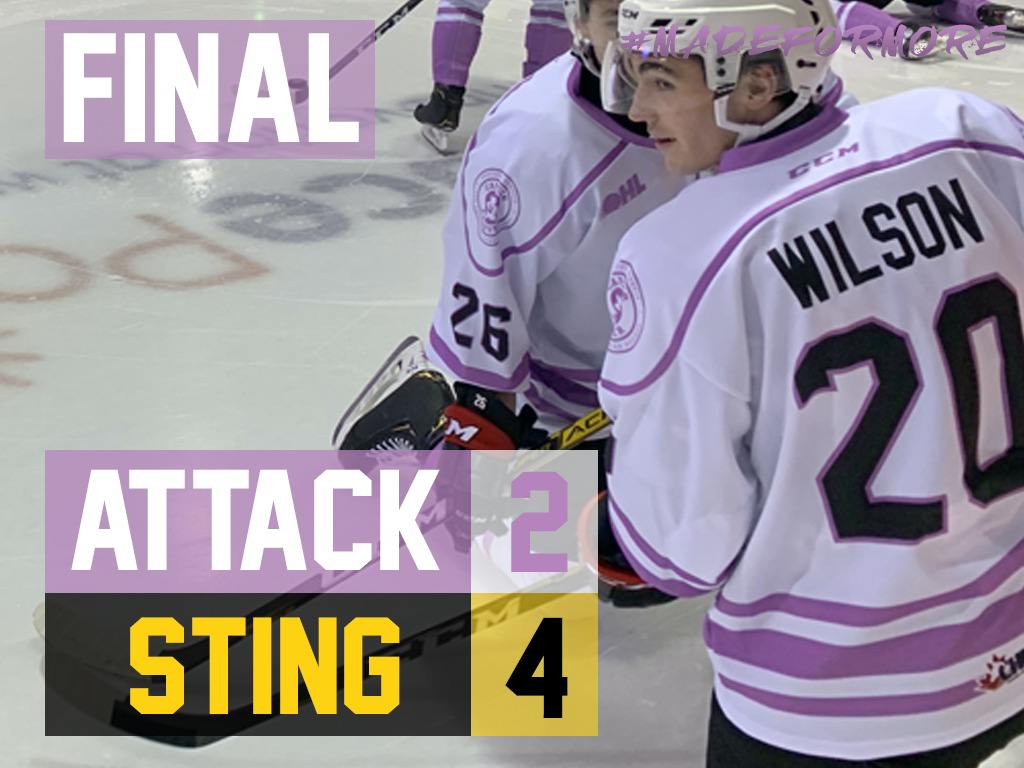 The Owen Sound Attack were meeting the Sarnia Sting for the first time this season on #HockeyFightsCancer night at the Bayshore. The Sting come into the game having won 6 of their last 7, and the Attack have yet to be defeated in regulation on home ice. Backup netminder Nick Chenard would get the start for Owen Sound and Ethan Langevin got the nod for Sarnia.

The Attack started off the first period well, recording 8 shots in the first four minutes with plenty of possession in the Sarnia zone. Langevin came up big multiple times as Owen Sound pushed for the opening goal. Chenard made a save of the year candidate at the halfway mark of the period, stretching to his left and making a great glove save to rob Sarnia of a sure goal that would have given them the early advantage. Unfortunately, just a few minutes later Sarnia would get on the board after Ryan McGregor found himself on a breakaway and slipped it through the five hole. Less than two minutes later, Jamieson Rees would score a shorthanded goal to give the Sting a 2-0 lead they would hold into the first intermission. The Attack outshot the Sting 19-11 in the frame but found themselves in a deficit going into period 2.

Owen Sound was playing a much more sound defensive game in the second, slowing down the Sarnia offense and not allowing them the big chances they received in the first. Eventually, this game play would pay off for the Attack, but it would be shorthanded. Once again, Matt Philip found himself in alone on the penalty kill and he made no mistake to put it past Langevin for the first time on the 30th shot of the night. The Attack were trailing 2-1 at the end of 40, but began to show the signs of life they’d need to get back into the game.

Beginning the third, the Attack had a chance on the power play to even things up at 2 apiece. Unfortunately, they couldn’t convert and wound up taking a penalty with just 5 seconds remaining on the man advantage. Sarnia would go on to convert their power play and the Attack would be once again trailing by two goals with 13 minutes left in the game. The hopes for an Owen Sound comeback were dashed further when Sam Bitten sniped the top corner to make it a 4-1 game with 8 minutes remaining. The Attack continued to work towards a comeback, but despite Philip’s second of the game with 40 seconds remaining, two goals was the closest they would cut the deficit and Owen Sound would lose their first regulation game on home ice this season, 4-2 to the Sarnia Sting. Shots on goal ended in Owen Sound’s favour, 42-27.

The Owen Sound Attack are back in action next weekend for two games at home. They will meet the Knights on Saturday night for Military Appreciation & Woolley’s Warriors night, with puck drop scheduled for 7:30 p.m. They will then meet the Erie Otters on Sunday afternoon with a skate with the team event happening after the game. Kids are advised to bring their skates and helmets if they want to participate. Puck drop for the Sunday matinee is at 2 p.m. Tickets for both games are available online and at the MacVicar & McComb Sutton-Sound Realty Box Office.