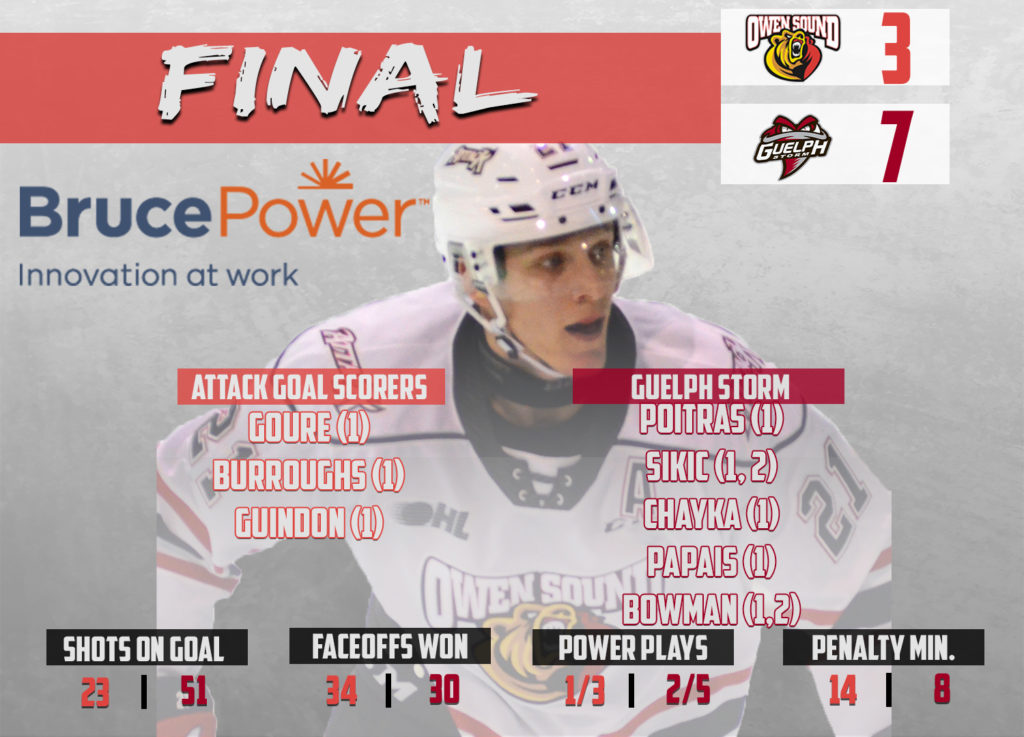 Valentines Day 2020. That was the last time Highway 6 rivals Owen Sound Attack and Guelph Storm face-offed in OHL action against each other.

In the young season the teams renewed the rivalry with the Storm taking the first of 12 meetings, by a score of 7-3.

The pace was high to begin action, as both teams came out looking to get in the win column for the first time this season. It was the visiting Storm however who looked to be pressing the issue, forcing the Attack to play on their heels.

Though hockey is a game of momentum and all it took for Owen Sound was a power play opportunity just under halfway into the opening period. It was Deni Goure, who finished off a nice give and go play with Stepan Machacek, and made no mistake from the slot.

The Storm evened the score during their own power play chance, with Matthew Poitras chipping the rebound over Mack Guzda. Marko Sikic then gave the Storm the lead shortly after, with his first of the season.

It did not take long for fireworks to start in the middle frame, as Sikic scored just nine seconds into the period to increase the Guelph lead. Owen Sound though had a quick answer, with Ethan Burroughs finding a loose puck and sniping it past Jacob Oster, to pull the Attack to with a goal. From there though it was all Storm. The visitors poured on the pressure and added a pair of goals to round out the second period.

Guelph did not let up in the final 20 minutes, as Braeden Bowman scored just over three minutes into the period to increase the Storm lead to 6-2. Bowman would add a second tally just after the halfway mark of the period. Attack rookie Cedrick Guindon would take advantage of a Guelph turnover and wire a wrist shot past Oster for his first career OHL goal.

Mack Guzda had been peppered with shots all game, facing 51 in total.

The Attack are back in action Saturday night when they welcome the Son Greyhounds, as they continue to look for their first win.