Attack Fall To Firebirds 4-3 In Overtime 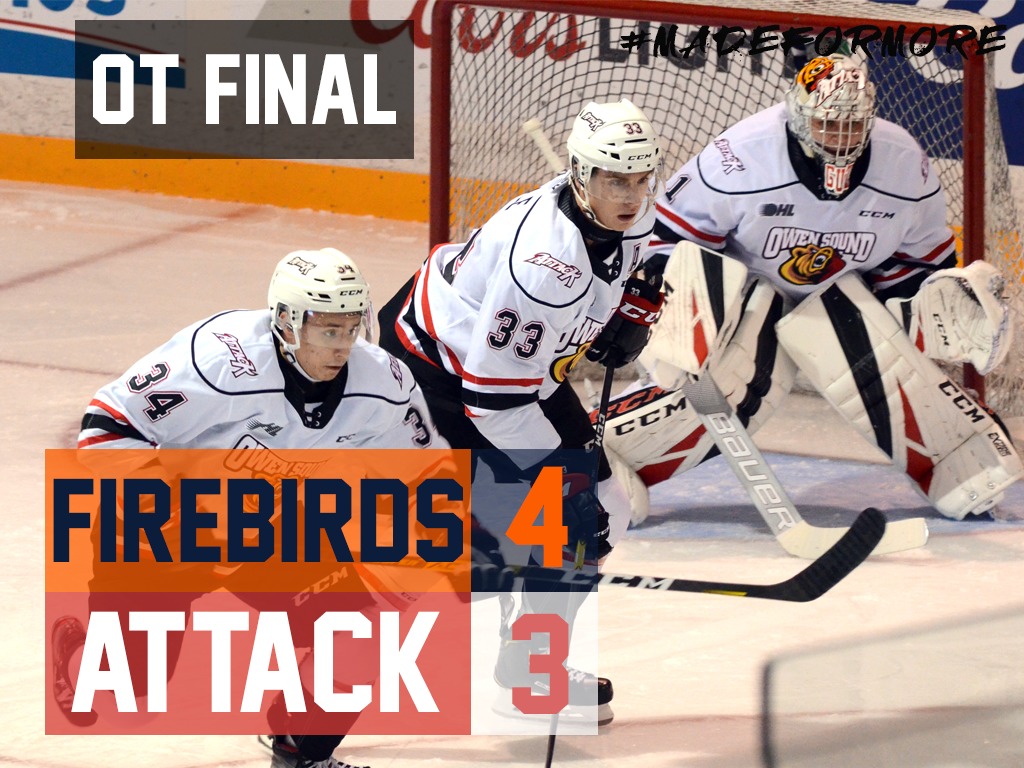 The Flint Firebirds rolled into town on Wednesday night ranked in the Kia CHL Top 10 for the first time in franchise history, hoping to leapfrog the Midwest Division leading Owen Sound Attack. Both teams were looking for a win to take them to the top of the Western Conference two months into the season. Mack Guzda got the start for Al Letang’s Attack while Anthony Popovich earned the start in the Flint net.

Owen Sound would start the game off well, recording the first shots on net but found themselves disadvantaged early after heading to the penalty kill just over three minutes in. The Bayshore faithful were unhappy with the call and were full throat in their disapproval, inspiring the Bears to kill off the minor. Deni Goure found himself in the slot after a give and go between captain Aidan Dudas and Sergey Popov and he put all of his strength into a slapshot that drilled the back of the net for a 1-0 Attack lead. Owen Sound would keep things under control for the rest of the period and headed to the first intermission with the lead. The shots on goal were in the home team’s favour after the first 20, 16-9.

Earlier in the day, Attack captain Aidan Dudas learned that he would also be wearing the C for Team OHL in the upcoming CIBC Canada Russia series. He vindicated Hockey Canada’s decision by pouncing on a rebound in the Flint slot and wiring one past Popovich to double the Attack lead 2-0. Dudas later brought the crowd to their feet with an outstanding one man penalty kill, holding onto the puck in the Firebirds zone for an extended length of time. Guzda continued his run of stellar play for the Attack as well, making a highlight reel sprawling save to rob Jake Durham of a sure goal midway through the period. The Attack found themselves shorthanded three times in the 2nd but killed every opportunity to head to the final frame up 2-0.

Unfortunately, the perfect night had to come to an end for the Bears and less than a minute into the period Evgeniy Oksentyuk scored his third of the year to cut the lead in half. Just a few minutes later, Riley McCourt would score his 4th of the season and all of a sudden the two teams found themselves on level ground with 14 minutes left to play. The captain wouldn’t let it stand though and he would drive to the net, receive a pass from Daylon Groulx, and tuck it in behind Popovich to restore the Attack just before the halfway mark of the third. As time ticked away on the scoreboard, the Firebirds became more and more desperate to get another one and tie the game once again. Barret Kirwin had a chance to finish the game after making a solid play through the neutral zone, but hit the side of the empty net. Flint kept pushing and with less than 10 seconds remaining, their captain, Ty Dellandrea, would bounce one off the skate of Guzda and into the Attack net to send the game to overtime.

3 on 3 overtime always delivers end to end play, and the Firebirds were willing to trade punches with Owen Sound in the extra frame. Matt Philip and Andrew Perrott had a glorious chance on a 2 on 0 breakaway, but Popovich continued his strong play, making his 35th save of the night to deny Owen Sound the victory. Oksentyuk was on a mission in the final 30 minutes of this contest, and he found the back of the net at the 1:45 mark of overtime to give the Firebirds an overtime victory while Owen Sound would have to settle for the single point.

Owen Sound is back in action Friday night in Kitchener as they take on the Rangers. Puck drop is scheduled for 7:30 p.m. The Attack return to home ice Saturday night for Hockey Fights Cancer against the Sarnia Sting. Tickets are limited, but are available at the MacVicar & McComb Remax Attack Box Office and online.

Prior to the game, Bumstead Insurance donated $9,000 to Mark Woolley’s foundation, Woolley’s Warriors to help send kids to D-Camp, a camp where kids with diabetes learn to live with the disease.