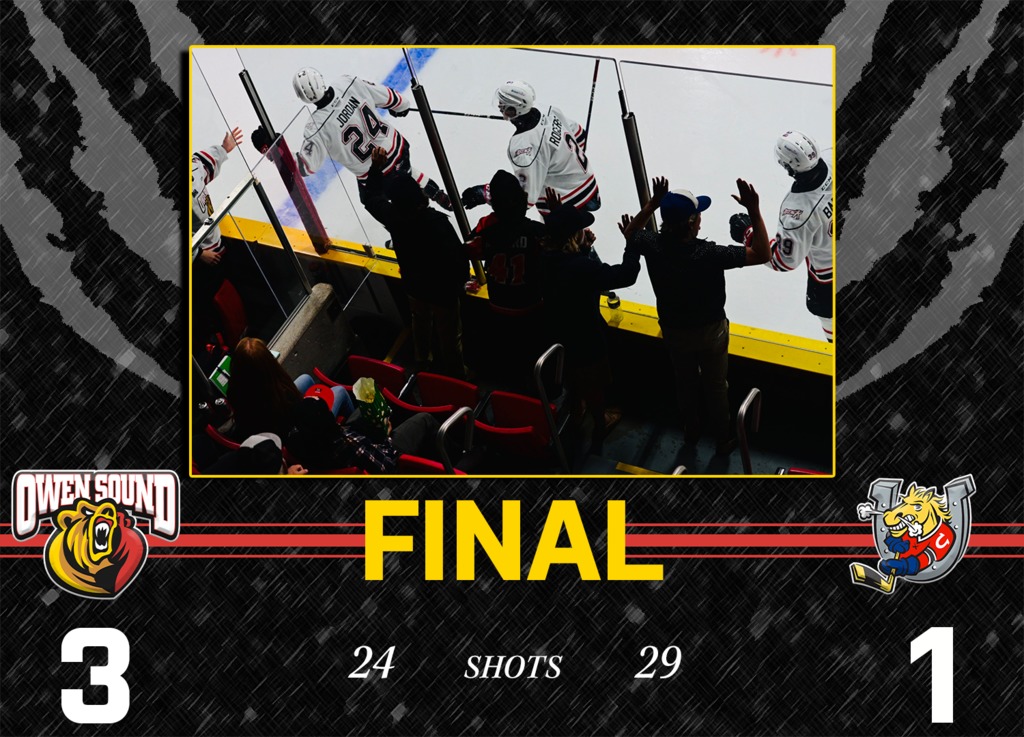 The fireworks started just over a minute into the action, as the Owen Sound Attack wrapped their preseason schedule with a feisty 3-1 victory over the visiting Barrie Colts on Saturday night.

It seemed that the Attack, already only dressing 16 skaters, were playing short-handed the entire game. The Attack had a whopping 22 minutes in short-handed play, compared to only 2 minutes of power play time. Despite the constantly being a man short, the home Bears kept fighting even getting a short-handed goal from a beautiful play by Colby Barlow to set-up Ethan Burroughs.

In the Attack net veteran Nick Chenard, would carry the load the entire game, and though not facing a high volume of shots, the overage net minder seemed under constant pressure. Though having six power play chances, Barrie’s biggest threat of offence came in the last few minutes of the game, as they pushed to even the score. However, Chenard was equal to the task making some highlight reel saves, including flashing the leather with just over a minute on the clock.

It was Sam Sedley, who played his second straight game at forward as the Attack are still without some key players away at NHL camps. The 19-year old opened the scoring after some good forechecking with line mates Thomas Chafe and Barlow, before he slammed the puck into the back of the net. An early third period power play goal would bring the Colts even, but under two minutes later, Barlow and Burroughs would strike short-handed to regain the Attack lead. Barlow would then increase the lead to 3-1, after showing nice hand-eye, deflecting a Luc Schweingruber point shot into the back of the net.

Owen Sound now has a week to prepare for their season opener Friday, September 30th in London, before returning home on Saturday, October 1st for their Home Opener against the Kitchener Rangers! Fans can purchase Tickets for the Home Opener by calling or visiting the MacVicar and McComb Sutton Realty Box Office, or by going online.