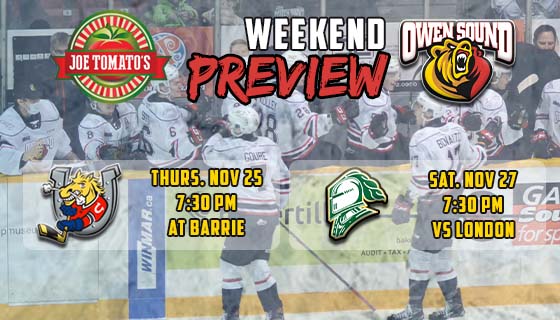 The Owen Sound Attack have had quite the month of November. After winning just three games during the first month of the season, the Bears have clawed back, earning points in six of their seven contests so far this month, including a five game winning streak. Owen Sound will round out the month with a pair of games on tap, from seeing a former teammate to a division rival for a sixth meeting of the season.

After a trade late last week with the Barrie Colts, the Attack won’t have to wait long to see former teammate Mack Guzda, as the Bears travel to Barrie Thursday night. This will mark the first meeting for the Battle of Highway 26 this season, and it promises to be high flying, as the teams split their two meetings during preseason action. The Colts have an intriguing team this season, as they have the make of a championship team, but spotting goaltending and inconsistent offence has them sitting middle of the pack in the Eastern Conference. Owen Sound on the other hand has found their game throughout November and look to continue with their strong play.

The Attack will look to finish the month off strong when they host division rival London Knights at the Bayshore Saturday night. This will be the sixth meeting of the season between the two teams, and although London has taken the five prior games, Owen Sound has played the Knights tough, with all but one game being decided by a single goal. With so many meetings in such a short amount of time, there is bound to be story-lines within the game, and one in particular will be Mark Woolley vs Brody Crane, as it was Crane who sent the Attack captain crashing into the boards after a late hit off an icing call earlier in the season.

With a pair of tough games ahead, Owen Sound will have to rebound after being shutout in Sarina Sunday afternoon, but this young roster has proven resilient and strong willed early in the season. Tickets for Saturday night’s game are going fast and  can be purchased online or by calling or visiting the McVicar and McComb Sutton Reality Box Office.

The Attack will be without rookie winger Colby Barlow for each game, as he participates in the Capital City Challenge as part of Hockey Canada’s U-17 Program. The tournament is set to begin Friday Nov. 26, with Barlow and his Team Canada Black opening against Team Canada Red at 7:00 pm the Friday night.