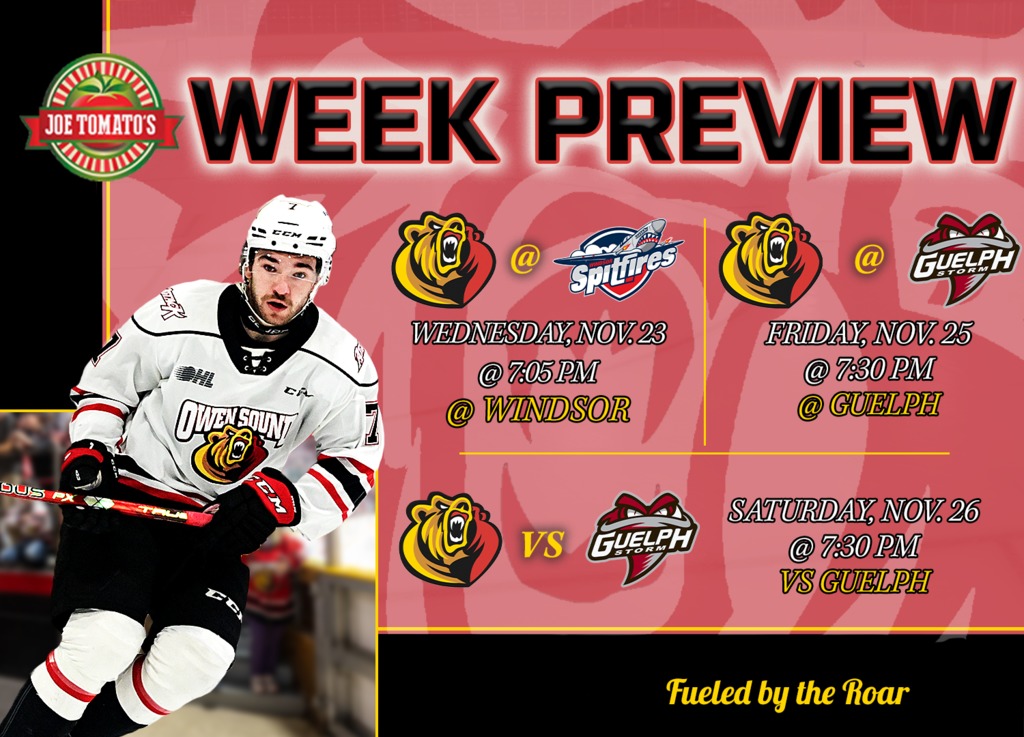 After splitting their two games against Eastern Conference opponents last week, the Owen Sound Attack’s schedule has them back face-off against Western Conference teams, highlight by a pair of divisional matchups!

The week opens on the road for Owen Sound as they travel south for their first trip to Windsor this season and second meeting with the Spitfires. The Attack claimed a 6-5 overtime win back in October when the teams met at the Bayshore, with captain Colby Barlow blasting home the OT winner. At that time Windsor had yet to drop a game in regulation, but now find themselves chasing the up and coming Saginaw Spirit for tops in the West Division. For their part, Owen Sound will look to get their offence rolling again, as they managed just six goals over the two games last week, after scoring a combine 20 goals in the three games before that. Windsor is an impressive 7-1-2 at home this season, while the Attack have shown respectably on the road, with a 5-3 record, setting up an exciting clash of a pair of top Western Conference teams.

A home and home will wrap the week for Owen Sound, as they first visit Guelph on Friday night, before welcoming the Storm to the Bayshore Saturday night in the annual TOYS FOR TOTS game. After struggling to begin the year, the Storm are coming off a pair of wins last weekend, including a dominant win over the Kitchener Rangers. Leading the Storm in the pair of wins was Matthew Poitras, scoring a pair of goals and totalling eight points in the two games. Along with Poitras’ offensive surge, new Storm member Max Namestnikov has registered six points in just two games since coming over from the Sarnia Sting. For Owen Sound they look to continue their early dominance over the Midwest division collecting eight wins, while only dropping three to their division rivals.

Fans can catch the Attack road games on Rogers TV, or stream through OHL Live on the CHL TV app. Tickets for Saturday night are becoming limited but can be purchased at the MacVicor and McComb Sutton Realty Attack Box Office by calling (519) 371-7452 or going online.

NOTE: The Toys for Tots game will be welcoming donations by fans on game night. These donations can be either new unwrapped toys or a cash/gift card donation.