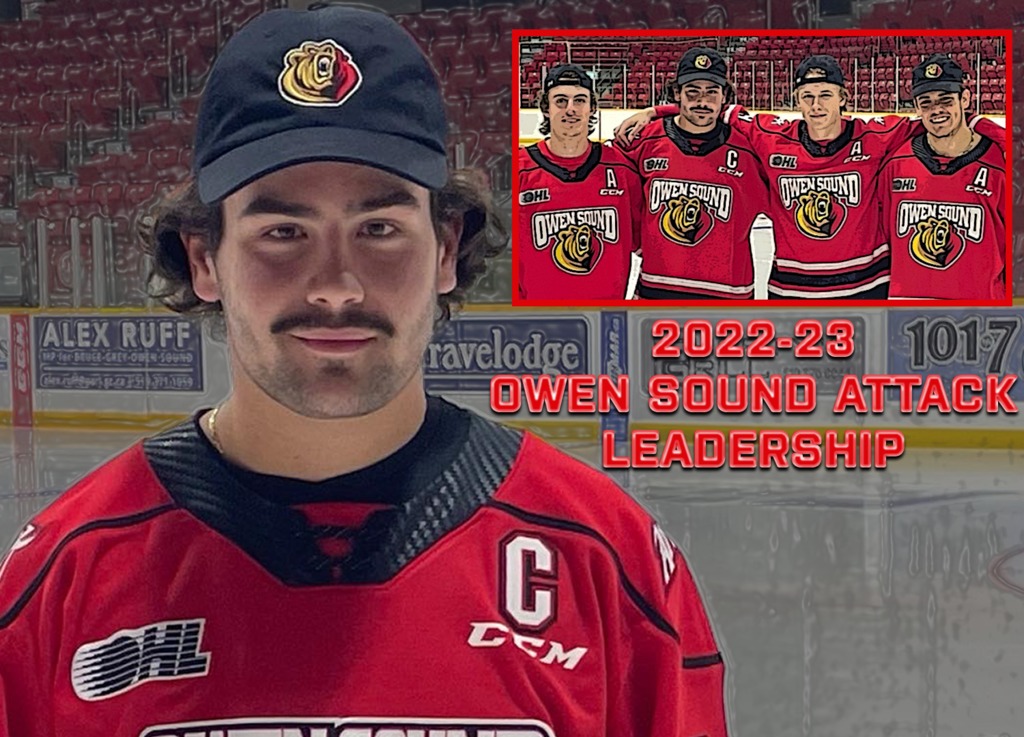 Colby Barlow set a franchise record of 30 goals as a 16 year old in his rookie season, and now is named the youngest captain in Owen Sound Attack history.

Flanking Barlow in leadership is 19 year old players Ethan Burroughs and Sam Sedley, with Gavin Bryant earning the other “A” on his jersey.

It was a tough choice for the coaching staff to make, as Head Coach Greg Walters and Associate Coach Jordan Hill spent much of the summer discussing the options. Walters praised the culture of the dressing room, acknowledging how the group is one of the best group of guys he’s had in a room.

“He just cares about his team and winning, making sure each guy is the best they can be,” Walters said of Barlow. “His compete level and intensity, is something in the coaches mind’s, that will help hold everyone in the room accountable.”

As mentioned Barlow finished last season with 30 goals, while adding 18 assists to tie Joey Hishon’s age 16 point record. The Orillia, ON native is a top NHL draft prospect in the 2023 NHL Draft, and brings international experience from his time with Team Canada at the 2022 Hlinka Gretzky Cup.

“It’s an honour to wear the captaincy,” Barlow said. “I mean anyone in that dressing room could be captain, we have such an unbelievable group of guys, and I’m just honoured to be chosen. I am excited to get the season started, and know we have the group to have a strong push this season.”

Bryant, Burroughs and Sedley all spent time wearing an “A” last season, and each bring unique styles of leadership to the group, something that Walters feels will help the whole group mesh together.

Fans will get their first look at Barlow and the other captains this Friday as the Attack open the 2022-23 season in London to face-off against the Knights. The home crowd will be greeted with the leadership group the following Saturday night as the Attack’s home opener is set for October 1st when they welcome the Kitchener Ranger, for a 7:30PM puck drop.

Tickets for the Home Opener can be purchased at the MacVicar and McComb Attack Sutton Realty Box Office (519-371-7452) or online at tickets.attackhockey.com.