Attack Primed For Tough 3 In 3 Weekend 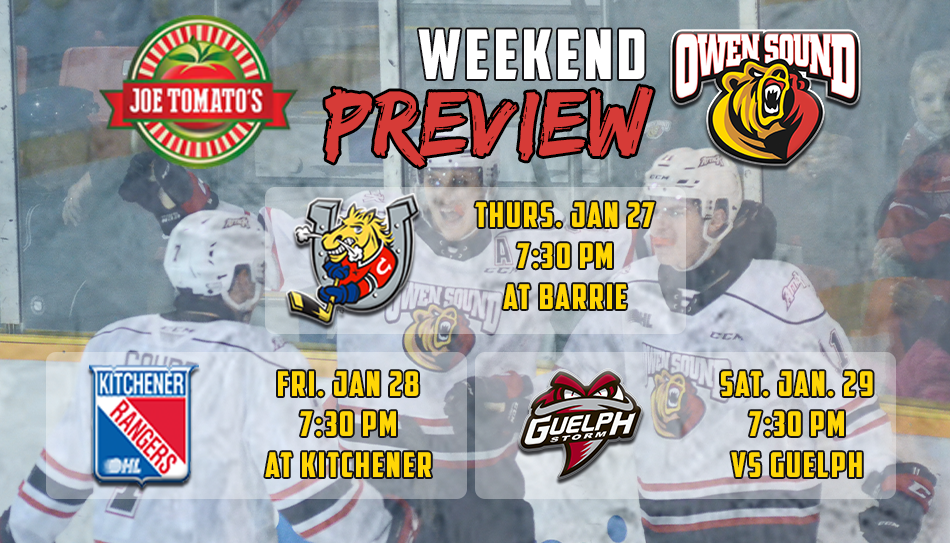 The Attack will be facing an onslaught of regional rivals this weekend as they play 3 games in 3 days against Barrie, Kitchener, and Guelph.

Coming off a home and home split series against the Sting in which both teams clawed out 4-3 decisions on the road, the Attack will trek up highway 26 to Barrie to face the Colts on Thursday looking to grab a firm hold on the season series. The Attack have won each of the 2 games played at Sadlon Arena with their only loss to the Colts suffered in early January at home.

The bears will need to shut down Barrie’s top two scoring forwards Ethan Cardwell and Declan McDonnell (acquired from Kitchener). The pair have 21 points in their last 5 games including 2 points each in Barrie’s 9-1 victory over Sudbury on Tuesday night. Owen Sound will be hoping for continued offensive output from Servac Petrovsky who has been lethal against the Colts with 3 goals and an assist in just three matches so far.

Friday night the Attack head to Kitchener to face the Rangers for the first time in almost 2 months. Kitchener would love to gain some ground on their Midwest division opponent as Owen Sound sits 3 pts ahead of the Rangers leading into Thursday night action. In the first three games between the two, the Attack are 2-1-0, losing the last game in a close 4-3 contest back on December 3rd.

Lastly, another winter storm advisory may be in affect on Saturday as things will no doubt become icy with Guelph coming to the Bayshore. Owen Sound has had a rough go battling the Storm so far this season, but have managed a series split to this point with each tam winning a pair of games. Guelph sits 9 points up on the Attack in the Midwest division but have seen losses in 3 of their last 4 games, meaning the Attack might just be in luck, catching a fading Storm.

With zero attendance for home games, fans can catch all the Attack action, home and away on RogersTV and OHL Live, or listen live on 560 CFOS Bears Radio.

The weekend preview is presented by Joe Tomatoes located in the Galaxy Plaza on the Sunset Strip.