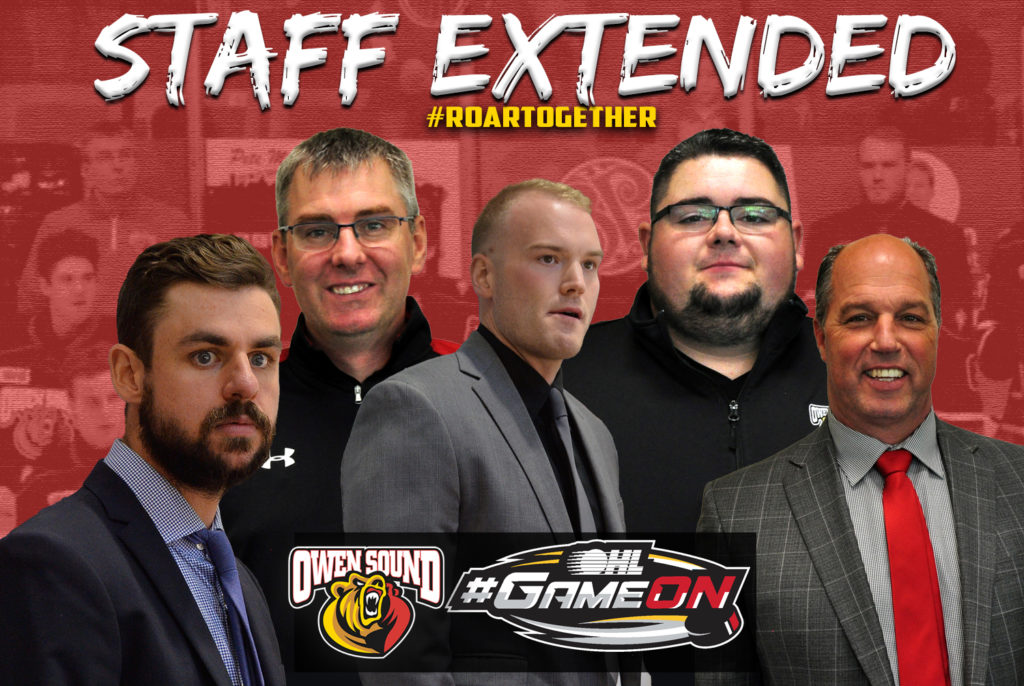 The Owen Sound Attack is pleased to announce that they have reached agreements with five members of the teams Hockey Operations staff ahead of the 2021-22 season.  The team has renewed the contracts of General Manager Dale DeGray, coaches Jordan Hill and Joey Hishon and therapy and equipment staff Andy Brown and Trevor Castonguay.

“The group of coaches and hockey operations staff we’ve been able to put together will be hard-working and demand success.  All the while making it fun to come to the Bayshore” said DeGray.  “I’m excited to get started in September and I hope everyone will be there with us.”

DeGray, the most successful General Manager in franchise history has spent the past 15 seasons with the Attack that have included an Ontario Hockey League Championship in 2011 and a Western Conference Finals appearance in 2017.  However, DeGray may be most proud of the consistency he has instilled in the organization.  The Attack are one of two organizations in the Canadian Hockey League that can boast having 11 straight 30-win seasons.

“I am incredibly happy about coming back for the next three years.  This has become my home away from home” said DeGray.  “The ownership has been fantastic from day one and I believe the fans are second to none”

DeGray has signed a three-year contract extension with the Attack that will take him through the 2023-24 season.

When it comes to coaches there aren’t any better than the Attacks Hill and Hishon, who have spent the last couple of seasons watching tape and crafting plays and developing the Attacks talent at both ends of the rink. Hill enters his 5thseason with the team, first as newly appointed Associate Coach, while Hishon enters his third full season with the Attack and will maintain his role as Assistant Coach and Assistant General Manager

“I am excited to have the opportunity to continue to work in the Attack organization” said Hill.  “Owen Sound is a place I have always wanted to be and I am very excited for the direction our staff and team are headed.”

“Owen Sound has always been home to me and there is nowhere else I would rather be” said Hishon.  I can’t wait to get back to the Bayshore and start building towards another successful season.  August 30th can’t come soon enough.”

Newly named Head Coach Greg Walters is very excited to get to work with Hill and Hishon on molding the new crop of Attack players.

“I am really excited to work with both Jordan and Joey” said Walters.  “I had Jordan as a player when I was a coach in Sarnia, his hard work, dedication and leadership skills are what make him a great coach.  I’m getting to know Joey, but the skill and passion he always exhibited as a player is second to known and I can see how it has transitioned into making him a great coach.”

“I am looking forward to all of us collaborating on what Attack hockey will be going forward and developing this team into an even bigger success than it already is” added Walters.

When it comes to the people that keep everything running, the Attack have a great duo in Andy Brown, the teams Head Athletic Therapist and Trevor Castonguay, the teams Equipment Manager.  Brown will be back for season 17, while Castonguay will mark his 6th season with the club.

“I want to thank our ownership group and Dale DeGray for the opportunity to continue in my role with the team” said Brown.  “Owen Sound is home for my family and I can’t thank them enough for their support through this shutdown.”

“It will be exciting to get back into the flow and grind of a full hockey season” continued Brown.  “I’m most looking forward to being back with the staff and players and building those relationships with the guys and to play a role in their development.  Most of all to build our team culture and produce a winning hockey team that competes for championships.”

“It feels great to be coming back to Owen Sound for two more years.  There are a lot of first-class people throughout the organization, so to be able to continue with the group we have and the staff we have is truly something special” said Castonguay.  “We have all been eager to get back on the ice the past year and a half.  I am really looking forward to seeing some fresh faces and getting back to business at the Bayshore.”

Jordan, Joey, Andy and Trevor have all signed two-year contract extensions with the Attack that will take them through the 2022-23 season.