Attack Set to Return to Bayshore for Pre-Season Action 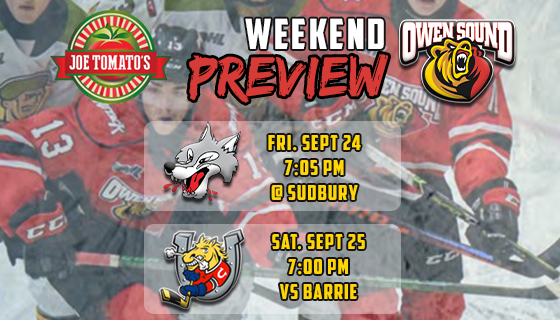 The Owen Sound Attack continue their pre-season schedule this weekend with a pair of games on the slate. First up the team travels north to Sudbury for a Friday night affair, before returning home for their first game at the Bayshore Saturday night, when they welcome Barrie.

Friday night’s game will be the third straight road pre-season game for the Attack, having already travelled to Barrie and North Bay. The game will mark the only time that Owen Sound and Sudbury will meet this year. Like most teams the Wolves have a strong presence of youth in their line-up. Quentin Musty, the first overall pick from the 2021 Priority Draft, has replaced departed star Quinton Byfield, and highlights the Wolves youthful roster.

Saturday night will mark the Bears first time back at the Bayshore in over 563 days, with their last game coming against the Colts. The game will be the second pre-season meeting between the teams, with Barrie winning the first game back on Labour Day 4-2. This time however, the Colts will be shorthanded, as star defensemen Brandt Clarke is away at his respective NHL training camp.

The Attack will have reinforcements for the coming weekend, as many of the players whom attended NHL Rookie Camps have returned.

Friday night’s game will be streamed through the new OHL Live platform. Fans can register/subscribe to OHL Live here. Tickets are limited for Saturday night’s game, but can be purchased at the MacVicar and McComb Sutton Sound Realty Attack Box Office or online. For fans wanting to purchase tickets on game night, the only access to the box office will be through the centre doors at the South-West entrance of the Bayshore.