ATTACK STING SARNIA WITH A 5-2 WIN 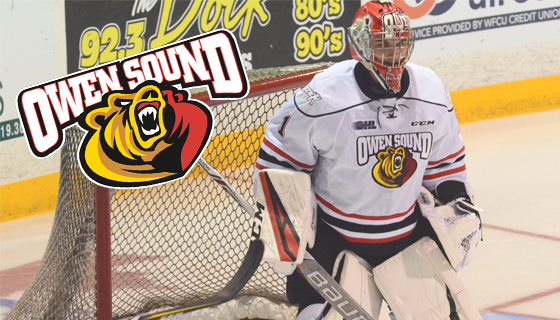 The Owen Sound Attack were looking to make a much-needed bounce back when they faced the Sarnia Sting for a 7:00pm puck drop on Wednesday night. And that they did.

The first period didn’t start off quite as the crowd would have liked as Daylon Groulx headed to the box at 0:55 for hooking, sending Sarnia to a powerplay early into the first.  The Sting took advantage and Sean Josling scored his first goal of the season 10 seconds into the powerplay at 1:05.

Sean Durzi, who has recently returned from Toronto Marlies camp, landed a penalty for kneeing at 3:55, sending the Sting on another early powerplay chance.  The Bears were able to hold of the Sting this time and kill the penalty.

At 9:25 into the first, Mitchell Russell finds the back of the net to tie the game up and put some momentum back in the team.  Russell’s goal was assisted by Sean Durzi and Daylon Groulx.

Attack were sent to their first powerplay of the game when Kelton Hatcher got sent to the box for roughing at 12:59. Owen Sound was unable to capitalize on the powerplay and the game remained tied.

Mack Guzda made a great save with 45 seconds left in the first to fuel the team on.  Mitchell Russell wails one from the blue line and Sarnia netminder Aidan Hughes mishandles the save, sending the puck over the line with 2 seconds to go in the first.  Russell’s goal was unassisted. Score sat at 2-1 after one period.

Mark McDade shots on goal at the end of the first sat at 23 for the Attack and 11 for the Sting.

The second period started out much like the first, but in the Attack’s favour this time.

At 2:25 into the second, Kevin Hancock put the puck to the back of the net sending the score to 3-1 Attack.  Hancock’s goal was assisted by Nick Suzuki and Alan Lyszczarczyk.

Theo Calvas headed to the box at 7:36 for cross checking to send the Attack on another powerplay chance.  Hancock responded and sends one past Sarnia netminder at 8:15 to make it 4-1 Attack on the powerplay. The atmosphere in the crowd was hyped.

However, Theo Hill responded just as quickly to Hancock’s goal and sent his first OHL goal past Mack Guzda to bring the score to 4-2 at 8:58 into the second.

The Sting give the Attack another powerplay chance as Sean Josling heads to the box for tripping at 10:04.  Owen Sound is not able to capitalize on the powerplay as Sarnia holds them off.

A Sting penalty to Franco Sproviero for slashing sends the Attack once again to the powerplay chance.  The Sting went shorthanded, taking a shot on Guzda who made a beautiful save.

With only 56 seconds left in play in the second period, Alan Lyszczarczyk sniped one past Hughes for another goal in the last minute of play.  Lyszczarczyk’s goal was assisted by Kevin Hancock and Nick Suzuki, and made the score 5-2 heading into second intermission.

Mark McDade shots on goal at the end of the second sat at 40 Attack, 20 Sting.

The crowd witnessed a quieter third period, with a lot of back and forth but no more scoring.

Sarnia made a goalie change to open the third period, bringing in backup netminder Ethan Langevin as Aidan Hughes got benched.

At 3:58 Maksim Sushko headed to the box for high sticking to send the Attack on another penalty kill.  The Bears were able to hold the Sting off and keep it a 5-2 game.

Ryan McGregor headed to the box at 12:47 for tripping, sending the Attack on a powerplay.

Markus Phillips landed a penalty for holding at 14:59 sending the Attack on another penalty kill.  They were able to hold off the Sting.

With less than 4 seconds left on the clock, Sting and Attack got a in a tussle at centre.  Both Igor Chibrikov and Sting’s Franco Sproviero both received 5-minute majors for fighting and both Daylon Groulx and Sting’s Adam Ruzicka received 2 minutes for roughing.

The Hatten Home Hardware Building Centre Hardest Working Player of the Game was Aidan Dudas, voted by the fans.

At the end of three, Mark McDade Chestnut Park shots on goal were 50-32, in favour of Owen Sound.

The Attack are back in action on Friday night when they head to London to face the Knights for a 7:30PM puck drop at Budweiser Gardens.