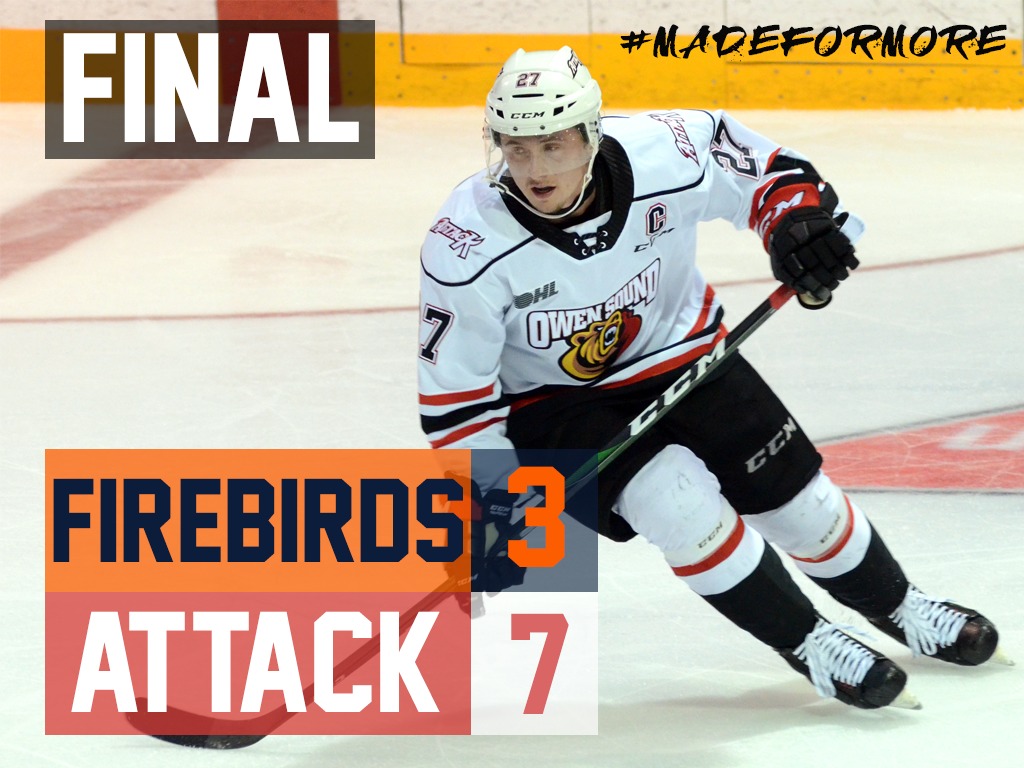 The Owen Sound Attack welcomed the red hot Flint Firebirds into the Bayshore tonight looking to rebound after a tough 6-4 loss against the Kitchener Rangers on Friday night. The Firebirds came into tonight’s game the winners of four consecutive games, a franchise record since moving to Flint.

Matt Philip flew into the first period hoping to snap that streak as he scored his second of the season just 1:08 into tonight’s contest. Kaleb Pearson would follow that up with a tip in front of the net to give the Attack a 2-0 advantage just over four minutes into the game. The 2-0 lead proved dangerous for the Attack, and Riley McCourt wired one home on a power play to cut the Attack’s lead back down to 1. Flint on the power play proved to be a common theme for the night, with the Firebirds enjoying 6 consecutive power plays in the first period. They could only convert on one, and the Attack scored shorthanded after a fantastic play by Aidan Dudas that Adam McMaster finished into the back of the net for his first of the season and a 3-1 Attack advantage. This lead would hold into the first intermission, as well as an advantage in the shots on goal, 13-12.

The second period began like the first, with Owen Sound headed to the penalty box. The Attack were called for a penalty on the ice, and the Firebirds were able to capitalize on the delayed advantage to return the score to a one goal game. The Firebirds earned one more man advantage, but the Attack penalty kill was on point and they denied the opportunity. Minutes later, the Attack earned their first power play of the game and it took just 12 seconds for Nizhnikov to convert and restore the two goal lead after a quick review by the officials. Four minutes later, Nizhnikov flew down the wing and sniped one past Luke Cavallin for his second of the game to give the Attack their biggest lead of the night, a 5-2 advantage. The score would hold into the second intermission with the shots almost even. Flint held a 24-23 advantage in shots on goal.

The Firebirds entered the third period looking to get back into the game and after a pretty passing play in front of the net 2 minutes in, Braeden Kessler scored his first career OHL goal to cut the lead to 2. Penalty problems would continue for the Attack, but the special teams unit continued to excel, killing off their 7th of the night. Owen Sound continued to put the pressure on the Firebirds and after an extended spell of possession in the Flint end, Sergey Popov tucked his 2nd of the season into the net and the Bears were up 6-3. The scoring wouldn’t stop there for the Attack as Dudas joined in the fun with his 2nd of the season to make it a 7-3 game. The Attack would skate to victory the rest of the way and end the game on top, 7-3.

The Hatten Home Building Centre Hardest Working Player of the Game was Matt Philip. The Three Stars of the Game were Adam McMaster, with 1 goal and 2 assists, Kirill Nizhnikov with 2 goals, and the first star was your captain Aidan Dudas with 1 goal, 2 assists and multiple highlight reel efforts.

The Attack return to action next Wednesday at home against the Kitchener Rangers. Puck drop is scheduled for 7:00 p.m. Tickets are available at the MacVicar & McComb Remax Attack Box Office and online.