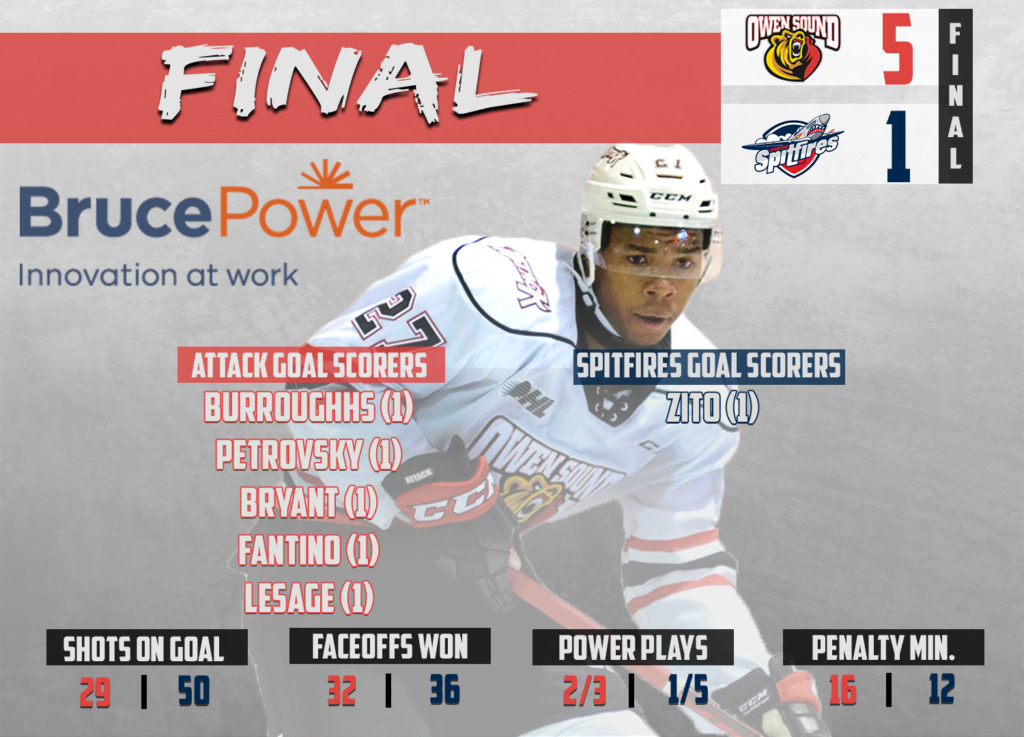 They always say revenge is a dish best served cold, and on Saturday night the Owen Sound Attack did just that, as they beat the visiting Windsor Spitfires 5-1 at the Harry Lumley Bayshore Community Centre.

The game wrapped a 3-in-3 for both teams, but you would never tell that from the start, as it was fast paced and hard hitting from the moment the puck dropped. It was the visitors from Windsor, however, that seemed to have a bit more jump in their stride, as they peppered Attack goalie Mack Guzda early and often, registering 50 shots on net. The veteran net minder that Guzda is though, seemed to accept the work load, as he turned aside every shot, except for a deflection in the dying seconds of the game that spoiled his shutout.

Much lick the game in Windsor on Thursday night, the physical play was up. However, the teams kept cooler head tonight, as there were only three power plays in the opening 20 minutes, with one being a 5-on-3 that stretched into the second period. It was special teams again that got the Attack going, as they broke a 0-for-12 slump with the man advantage to open the scoring, as sophomore forward Ethan Burroughs displayed some patience with the puck just below the face-off dot, before spinning and firing a perfect shot shoreside over the Spitfires goalie Xavier Medina. The Attack doubled their lead, again on the power play, this time with a 5-on-3 advantage, as it was import rookie Servac Petrovsky blasting home a one-time pass from Andrew Perrott. Petrovsky’s goal came after a flurry of chances for both Deni Goure and Burroughs in tight, before the puck got worked back to Perrott, who made a nice read to find the young Slovak at the left face-off dot.

Windsor had their opportunities throughout the opening 40 minutes, including a short-handed break-away, that Guzda calmly turned away, and as the final period began the Spitfires started to press for offence and got caught. First, it was Logan LeSage forcing a turnover just outside the Windsor blue line, before chipping the puck to a streaking Gavin Bryant. The Attack rookie used his speed to break through the Spitfires defence, before snapping a quick shot five-hole on Medina, and opening the Attack’s lead to 3-0. Just over two minutes later, Owen Sound forced another turnover in the neutral zone, this time it was Lorenzo Bonaiuto giving the puck up to Julian Fantino, who danced around a Windsor defender before placing a perfect wrist-shot past the block of visiting goalie, for his first career OHL goal.

The rough night would continue for Medina as just after the mid-way point of the third period, LeSage would win a foot race to a loose puck, and found a short-side hole in the net minder, that the puck squeaked through. This goal would be the nail in the coffin for both the Spitfires and Medina, as he was replaced in the net by rookie Kyle Downey.

Owen Sound would shift their focus to helping their net minder conserve the shutout, but with just seven second left on the clock, an in tight deflection from Pasquale Zito, rung off the post and snuck past Guzda to ruin the shutout bid.

For Owen Sound it was their second win of the season, and a strong way to cap a 3-in-3, as they now shift their focus to Wednesday night, when the rival London Knights visit the Bayshore for the teams fourth meeting in the young season.