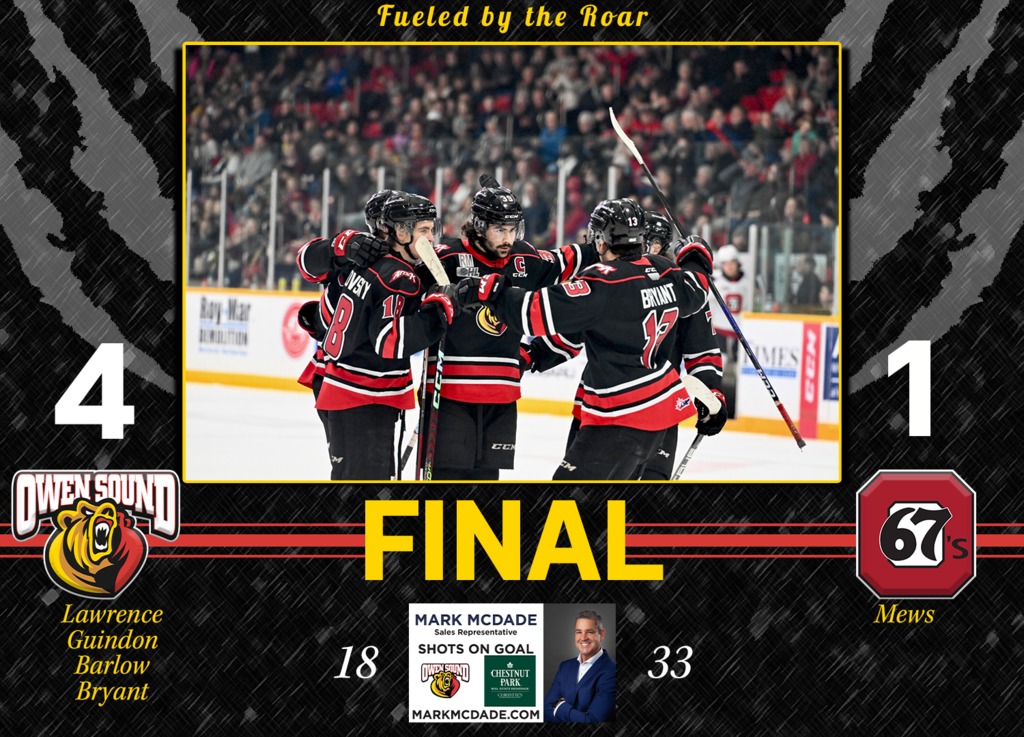 For the second straight game it was a three goal second period that propelled the Owen Sound Attack to a 4-1 Sunday matinee victory over the OHL leading Ottawa 67’s.

After an exciting 7-4 win over the visiting Peterborough Petes on Saturday night, Sunday’s afternoon affair at the Bayshore was a much more tactical game. Both teams seemed weary of the others potent offence as players settled for a more simpler regrouping style, not wanting to be the reason for an odd-man rush turnover.

Something must have been said to both teams during the intermission, as the pace of play picked up right from puck drop for period two. With both team’s utilizing their speed, the ice began to open up every so slightly, and just 2:30 into the period the Attack were able to take advantage of the that open ice. It was James Petrovski and Landen Hookey playing a switch at the blue line where hockey’s point shot found it’s way on net, and from there it was big Kaleb Lawrence using his size to grab the rebound and sweep the puck around an outstretched Ottawa goalie.

The visiting 67’s weren’t long to respond however, as rookie blue liner Henry Mews capitalized on an Ottawa power play just two minutes after the Lawrence goal to pull the game even at 1-1. That goal seemed to go to the visitor’s legs as they began pushing the offence onto the Attack. In net Corbin Votary, who got back-to-back starts for the weekend, was solid all afternoon as it was just the Mews shot that eluded him.

With the stellar goaltending Owen Sound was able to be patient and pick their spot for a counterattack, which came in a great forecheck by Ethan Burroughs. As the veteran forward created a turnover, he then showed his vision finding Cedrick Guindon back door for an easy tap in goal to put Owen Sound back in front.

Much like Saturday night, with a highlight reel, later period power play goal by Attack forward Deni Goure, Sunday saw just as nice of goal late in period two with the Attack also on the power play. On Sunday it was captain Colby Barlow, who after creating a turnover, sniped a perfect shot just under the crossbar to extend the Owen Sound lead. The goal was Barlow’s 33rd of the season, which gives him the outright lead in the OHL.

With a two goal lead and just 20 minutes left to play, Owen Sound was quite content to play the third period exactly like the first, low event and not giving Ottawa any quality scoring opportunities. As the visitors pushed for a goal late, pulling their net minder, another repeat of Saturday happened, with Gavin Bryant sealing the Attack win with his second empty netter in as many games.

The game concluded a busy four games in six days for Owen Sound, who were able to claim five of eight points during the stretch. The Attack will now enjoy a nice break, as they return to action Friday night traveling down Highway 6 to battle the Guelph Storm, before returning home Saturday to welcome the Sudbury Wolves to the Bears Den. Tickets for Saturday’s game can be purchased at the MacVicor and McComb Sutton Realty Attack Box Office by calling 519-371-7452 or going online at tickets.attackhockey.com.

Special Note: Attack captain Colby Barlow will be heading out west early in the week, as he will compete in the CHL/NHL Kubota Top Prospects Game Wednesday night. Fans can catch the game on TSN.