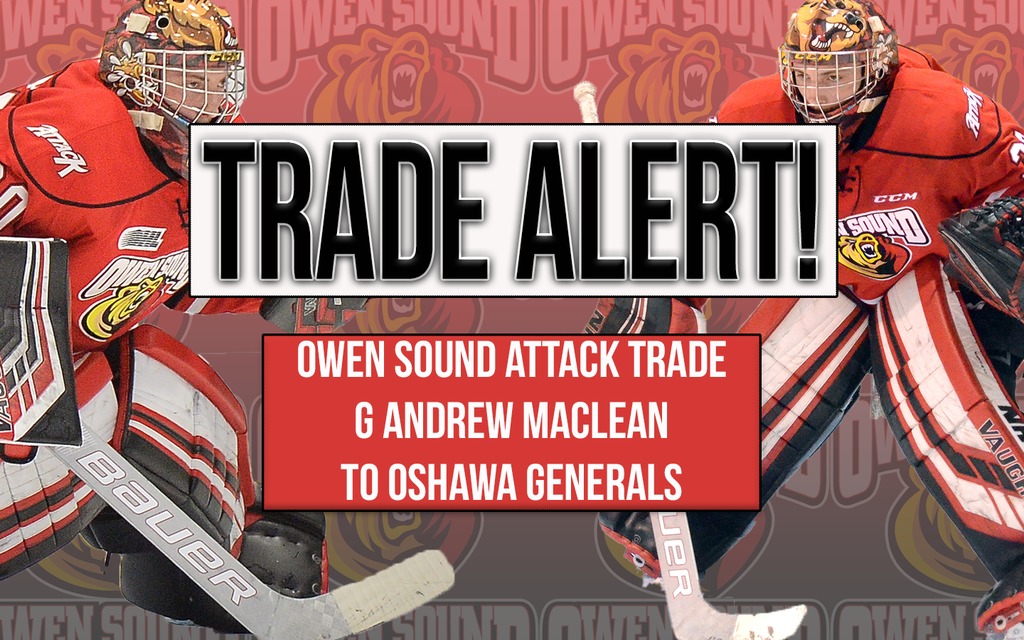 The Owen Sound Attack have sent goaltender Andrew MacLean to the Oshawa Generals in exchange for Kingston’s 5th round selection in the 2021 OHL draft.

The 18-year-old netminder from Port Huron, Michigan was a 10th round selection of the Attack in the 2017 draft. After joining the team in 2018, MacLean played 32 games with the organization, winning 11. MacLean earned OHL Player of the Week honours this past December posting a 3-0-0-0 record including one shutout victory with a goals-against-average of 1.67 and a save percentage of .953.

Attack General Manager Dale DeGray admits it was a difficult decision: “It was going to be hard carrying three goalies heading into the regular season, and even tougher with two 18-year-olds that both deserve playing time. Andrew has shown that he is capable of playing in the OHL and we hope he takes full advantage of his opportunity in Oshawa. We thank him for his professionalism and dedication to the Owen Sound Attack and wish him the best of luck in his future.”

The deal means the franchise will enter the season with Mack Guzda and Nick Chenard between the pipes.

Owen Sound will host the Ottawa 67’s on Saturday, September 21st to open the new campaign at home. Puck drop is at 7:30 p.m, and the Fan Fun Fest will return before the game.

The Attack will also host the North Bay Battalion this Saturday in their final home exhibition game. Tickets for both games and all regular season action are now available at the MacVicar & McComb Remax Attack Box Office. Take advantage of the Hockey’s Back Six Pack and get six tickets to any combination of games in September and October for just $100!