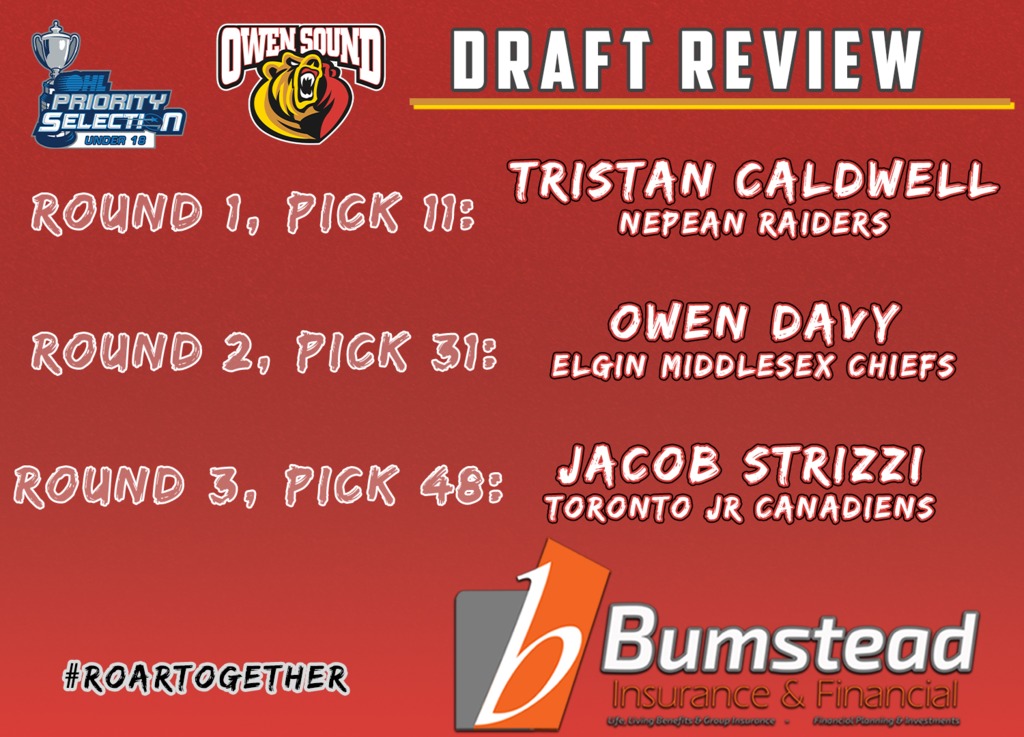 The Owen Sound Attack added to each position at the OHL U18 Draft Thursday night.

After a solid Priority Selection, Attack General Manger Dale DeGray and his scouting staff were back at it Thursday May 5th, this time at the U18 OHL Draft, adding three quality players to the Attack’s prospect pipeline.

In the first round Owen Sound selected Tristan Caldwell, a left shot defensemen out of the Nepean Raiders U18 program. Tristan recorded 14 points on 30 games with the U18 Raiders this past season, while also suiting up for five games with the Jr. A Raiders of the CCHL. Tristan will bring some lost size to the Attack blue line, as he is listed at 6’2″ and 194 pounds, the 17 year old is a nice complement to the Owen Sound blue line.

With their second pick, Owen Sound selected Owen Davy, a goalie out of the Elgin Middlesex Chiefs U18 program. Owen will look to compete for a spot in the Attack crease, and posted impressive numbers this season with the Chiefs, having a 2.52 goals-against average and recording a pair of shutouts. Owen is on the slighter side for goaltenders, standing at just 6′ even, but the Attack have had recent success with slightly undersized goalies, with a great example being Micheal McNiven.

The Attack’s final selection at the U18 draft was Toronto Jr Canadiens forward Jacob Strizzi. Jacob will join an already deep Attack forward group, but the 17 year old will look to bring speed and tenacity to the team.

Overall, the Attack are very happy with how both the Priority Selection and U18 Draft went and look forward to welcoming all new prospects to Owen Sound next season.