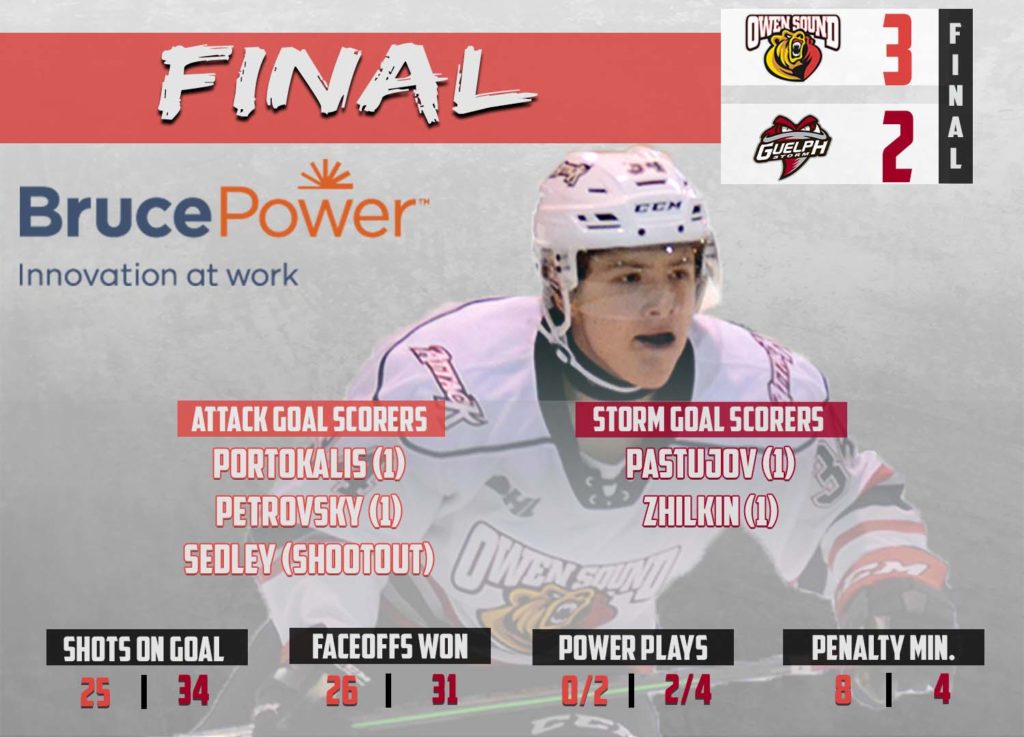 The month of November has treated the Owen Sound Attack well, as they earn their fourth straight victory with a 3-2 shootout win over the Guelph Storm Friday night at Sleeman’s Centre.

After announcing the trade of overage goalie Mack Guzda earlier in the day, the Attack made clear that Nick Chenard was ready for number net minder duties. Boy did he deliver.

It was a slow and sleepy start to the game, as both teams looked tentative. The home Storm though controlled most of the play during the opening 20 minutes, firing 12 shots on Chenard, with a few high quality chances late in the period.

The Attack opened the scoring however, as newly acquired forward William Portokalis broke the 0-0 score just over half-way through the second period. Portokalis comes to Owen Sound looking for results based on his offensive skill set, and displayed good focus to open the score, keeping his eye on a puck deflected high into the air. As the puck bounced once off the ice, the 19-year old forward corralled it and swiped it through Jacob Oster’s five-hole. Owen Sound would take the 1-0 lead into the third as they looked for their second straight win over Guelph.

Last Saturday in Owen Sound, Guelph went a dismal 1/6 on the power play, and were 0/2 through the first two periods of Friday night’s game as well. That changed early in the third as the home team needed only 43 seconds into the period to capitalize on a split period power play. Guelph would take the lead with another power play goal close to the mid-way mark of the third.

Owen Sound looked shocked as they found themselves trailing late into the third period, but with about two and half minutes left on the clock head coach Greg Walters opted to keep Chenard on the bench for an extra skater. The Storm had chances to seal the game, but were unable to find the empty cage. Owen Sound would capitalize with less than a minute left on the clock, as Servac Petrovsky was able to beat a sprawling Oster.

The teams were very patient and methodical throughout overtime, as neither wanted to make a mistake. It was with just second left though that Storm star Sasha Pastujov came down and nearly won the game for the home squad. However, the game would go to the skills competition, as the Attack took a peculiar approach to their shooter selections. Owen Sound would use three defensemen as their shooters, with Nolan Seed, Sam Sedley and Andrew Perrott all shooting. It was Sedley who’s shot squeaked through Oster, which gave the Bears a 1-0 lead after the first two shooters. Perrott had a chance to seal the win, but could not beat the Storm net minder, and it came down to Chenard slamming the door on Guelph’s final shot to secure the win for Owen Sound.

Chenard is now 2-0-1 in his three games this season, with both wins coming against Guelph.

Owen Sound will return to the Bayshore tomorrow night when they get their first look at an American team this season, as the Saginaw Spirit are in town. The game will be available on the Community Channel of RogersTV Grey County, as CTRE will produce the action. Tickets are still available for the game and can be purchased online or at the McVicar and McComb Sutton Reality Box Office.

A reminder to fans attending the game, that the Owen Sound Santa Clause Parade is taking place down town, so there may be delays travelling to the Bayshore. Please plan accordingly.