Attack Win Wild One On Friday Night In London 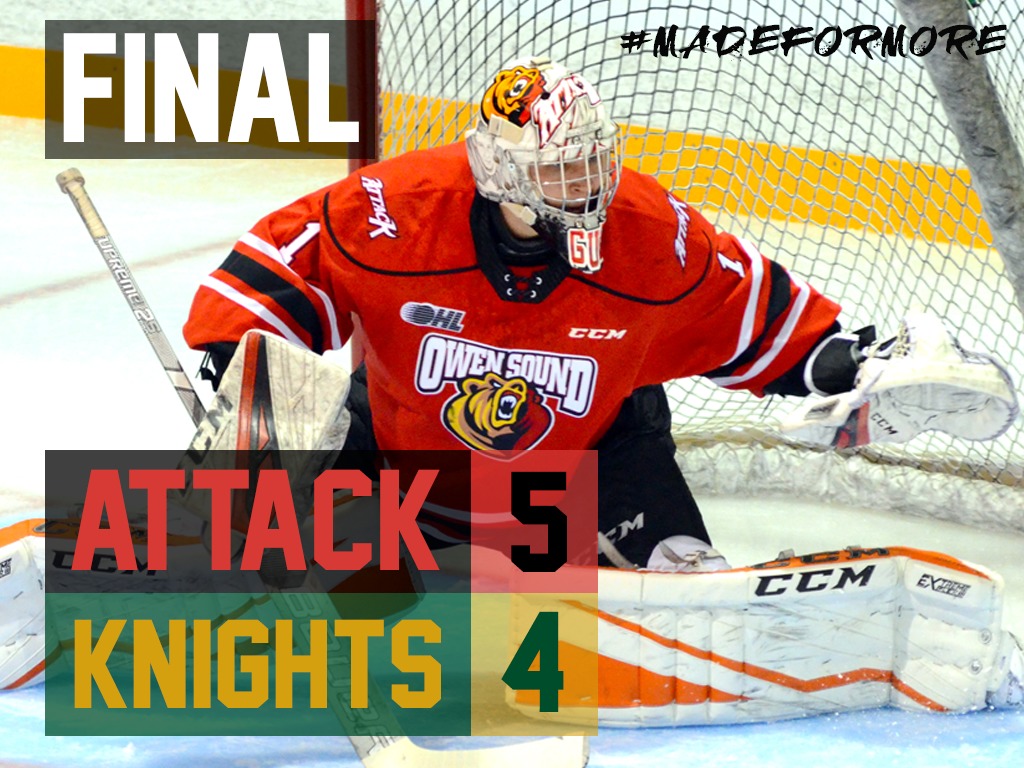 Mack Guzda and Barret Kirwin delivered heroics to earn two points for the Owen Sound Attack in overtime over London after a back and forth game in the Forest City.

The Owen Sound Attack visited the London Knights for the first time tonight at the Budweiser Gardens. The Midwest rivals always play exciting games and the two teams were looking to continue their own win streaks as they entered tonight’s game. Mack Guzda got the start for the Attack and Brett Brochu got the call for the Knights.

The Attack started the first period off well, scoring just over five minutes into the game after Barret Kirwin passed it to Ethan Burroughs in front of the net. Burroughs made no mistake on the one timer and delivered the early 1-0 lead. Just over a minute later, Kaleb Pearson got his 4th of the season after he wristed one through traffic and past the young goaltender. Deni Goure would end Brochu’s night two minutes later after he followed up a rebound off a Mark Woolley shot. Goure drove the net and slid it past the fellow Chatham-Kent product to make it 3-0 Attack and bring Jordan Kooy into the London net. The Attack had a late power play chance but their league leading unit couldn’t convert and they’d head to the intermission up 3-0.

The second period is where things began to get dangerous for the Attack. Owen Sound started taking penalties, and the Knights special teams were on fire. Alec Regula scored his second of the season on the power play to start to chip into the Attack lead. A few minutes later, Brady Lyle found Sergey Popov all alone in front of the London net. After a deke, Popov dished it to Kirwin who had an open net to tap it into and the lead was restored to three goals. London gained more chances on the power play, and they converted all of them. First, Cole Tymkin scored with 6 minutes left in the frame, and then after a controversial play at the London blueline, Jonathan Gruden added another one to cut the Attack advantage to just one. The Knights tied it up with just over two minutes to go in the frame and Owen Sound headed to the locker room looking to restore their first period mojo after being outshot 29-5 in the second.

Opening the third, the Owen Sound Attack looked much more settled on the ice. They were playing much more like the first period and controlling play through the opening ten minutes, outshooting the Knights 6-3. The Attack had multiple power play chances to open the frame but the club couldn’t get the special teams firing and it would remain tied with less than ten minutes remaining. Both teams had excellent chances to take the deciding lead, but Guzda and Kooy would be top notch in the final frame. Aidan Dudas, playing his 200th career game, almost connected with Popov in the final minute to give the Attack a deciding advantage but Kooy managed to knock it off his stick and send the game into extra time.

Ryan Merkley started things off with a bang in overtime, driving in on Guzda with a grade A scoring chance but once again, Guzda was there to close the door. Aidan Dudas went the other way on a breakaway, and the Knights goaltender was equally up to the task. 30 seconds later, Kirwin was set up by Adam McMaster in the slot and he made a perfect shot to end the game and deliver two points for the Owen Sound Attack.

The Attack improve to 5-2-0-1 on the season, and are now on a three game winning streak. The win snapped London’s current three game win streak.

The Hatten Home Building Centre Hardest Working Player of the Game was Mack Guzda, making 47 saves in the winning effort. The Owen Sound Bug Juice North Stars Three Stars were Barret Kirwin, who had two goals and an assist, Alec Regula who had a goal and an assist, and the First Star was Guzda.

The Owen Sound Attack are back in action tomorrow night against the Sault Ste. Marie Greyhounds at the Harry Lumley Bayshore Community Centre. Tickets are available at the MacVicar & McComb Remax Attack Box Office and online. Puck drop is scheduled for 7:30 p.m.