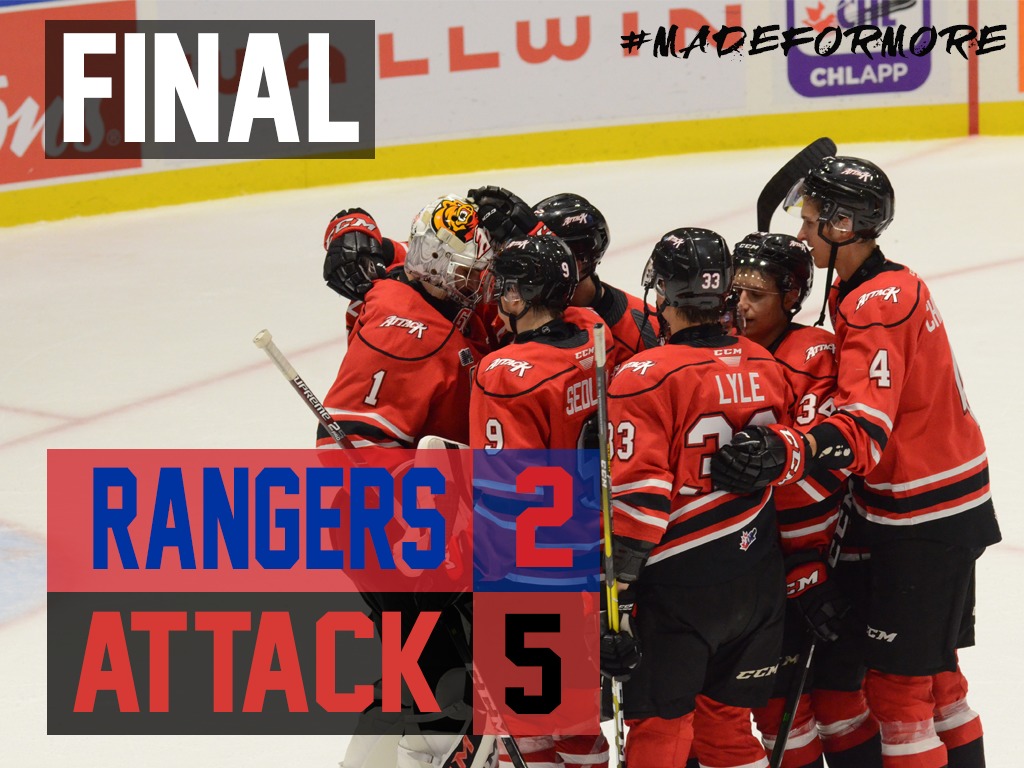 The Attack rolled into Kitchener on Friday night looking to extend their lead atop the Midwest Division against a Rangers team that has recorded a point on home ice every game this season. The season series between the two teams had been split one apiece heading into tonight’s game, with both teams taking a victory at home. Mack Guzda got the nod for Head Coach Al Letang’s squad while Jacob Ingham started in the Rangers net.

The two teams got off to a relatively slow start this evening, with only 3 shots total in the first six minutes of the game. The defense on both sides were solid at breaking up offensive chances before either team could get set up in the zone. It wasn’t until shortly before the halfway mark of the frame that the Attack started to control the puck and earn strong possession time in the Kitchener end. Barret Kirwin stripped the puck from a Ranger trying to break out and turned towards Ingham. Kirwin was penalized during the play, and he’d make an impact on the power play. With 1 second remaining on the man advantage, Kirwin leaned into a shot from just inside the circle and put the Attack up 1-0. Owen Sound would have to kill two penalties in the final ten minutes, but they escaped the first unscathed and would head into the second looking to build on the one goal lead. Shots after 20 were in the Bear’s favour, 10-7.

The last time Owen Sound came to Kitchener, they found themselves with a one goal lead after the first period that they were unable to hold onto. The Attack wouldn’t let that happen again and came out determined to add to their lead. The road team seemed to be the first to every loose puck and threw shot after shot at the Kitchener net. At the halfway mark of the 2nd, the Attack found themselves in their first trouble of the period as they went to the McDougall Energy Penalty Kill. They wouldn’t be discouraged, and after Adam McMaster was denied on a breakaway, Kaleb Pearson set up the captain Aidan Dudas shorthanded to double the Attack lead. Just over a minute later, Deni Goure made a solid play driving into the Kitchener end where he laid off the puck for Kirwin who made no mistake for his second of the game and a big 3-0 lead for Owen Sound. At the end of the period, the Attack had put 20 shots on net compared to 9 for the Rangers.

The third period started out terribly for the Owen Sound Attack, with Ville Ottavainen scoring on a screened Guzda just over a minute in. Shoftly after, the Attack would commit their fourth penalty of the night and the Rangers would make them pay just three minutes in to the period to cut the lead to one. Coach Letang would take the Attack’s 30 second timeout in an attempt to settle down the team. The timeout worked and Owen Sound regained the poise that had led them so well for the first forty minutes. The Bears began to push back against a Rangers team undefeated in regulation at home. A scary penalty kill for the Attack came with 5 minutes left in the game, but Matt Philip put the worries to bed with an unassisted shorthanded goal just ten seconds into the minor. Kitchener wouldn’t convert on the powerplay and McMaster would ice the game with his third of the season to put Owen Sound up 5-2 with 2:29 to play. They would skate out the rest of the game and would head home with a win under their belts. The final shots on goal were 36-30 in the Attack’s favour.

The Owen Sound Attack return home to wrap up the weekend with the Hockey Fights Cancer game against the Sarnia Sting. The team will be wearing special lavender jerseys that will be auctioned off online after the game. Tickets are limited, but available at the MacVicar & McComb Sutton Sound Realty Box Office and online. Puck drop is scheduled for 7:30 p.m.