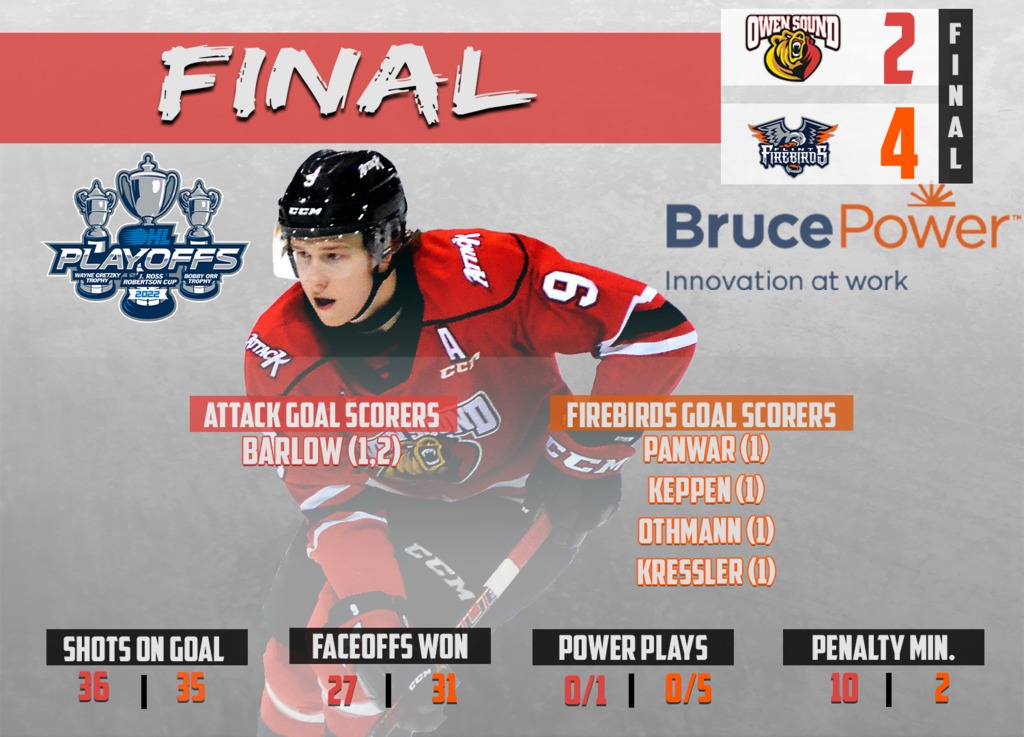 It’s always tough when your season comes to an end, but for the Owen Sound Attack it came in one of hockey’s most heartbreaking ways. The Attack fell 4-2 to the Flint Firebirds in game 7 of the Western Conference Quarter-final matchup.

Attack star rookie Colby Barlow opened the scoring just 5 minutes into the game, when he found himself alone in front, and was able to bang home his own rebound, past an outstretched Luke Cavallin.

For much of the series the teams have went back and forth, and game 7 was no different as, the Firebirds evened the game just 3 minutes later, when they buried a shorthanded break away chance. Though the building came alive when the home team got on the board, the young Attack showed great poise, as they stuck with their game.

The teams would skate well into the second period tied at 1-1, with chances on both sides. Cedrick Guindon had a shorthanded chance of his own to break the tie early in the period, but was stopped by Cavallin.

The Firebirds would then break the tie 13:58 into the period, when off a face-off Ethan Keppen was able to free his stick and bang home a rebound in front. The arena exploded, but the Attack bench and players showed no signs of despair, as they went out the next shift with energy, trying to get the equalizer.

The Firebirds would extend their lead to 3-1 early in period 3, but Owen Sound continued to battle, as they forechecked hard, refusing to give Flint an easy win.

Barlow would make thing interesting bringing the Attack back within a goal, with just under 7 minutes left on the clock. As tension mounted within the arena, Owen Sound pressed hard for the tying goal. As Nick Chenard sat on the bench for the extra skater, it was Flint who iced the game with an empty netter.

Chenard was solid all game, and all series, including a big 46 save shutout in game 6. Captain Mark Woolley was noticeable all game Wednesday night, as he delivered a few bone crushing hits, including laying out Firebirds captain Brennan Othmann.

Though it was not the end that the Attack had hoped for, the future is bright for this young squad as much of the roster will be eligible to return next season.

The Attack organization would like to reach out and thank all our loyal fans who supported us through this difficult season and look forward to welcoming everyone back in the Bayshore for next season!