Bears Bounce Back with Near Perfect Road Game 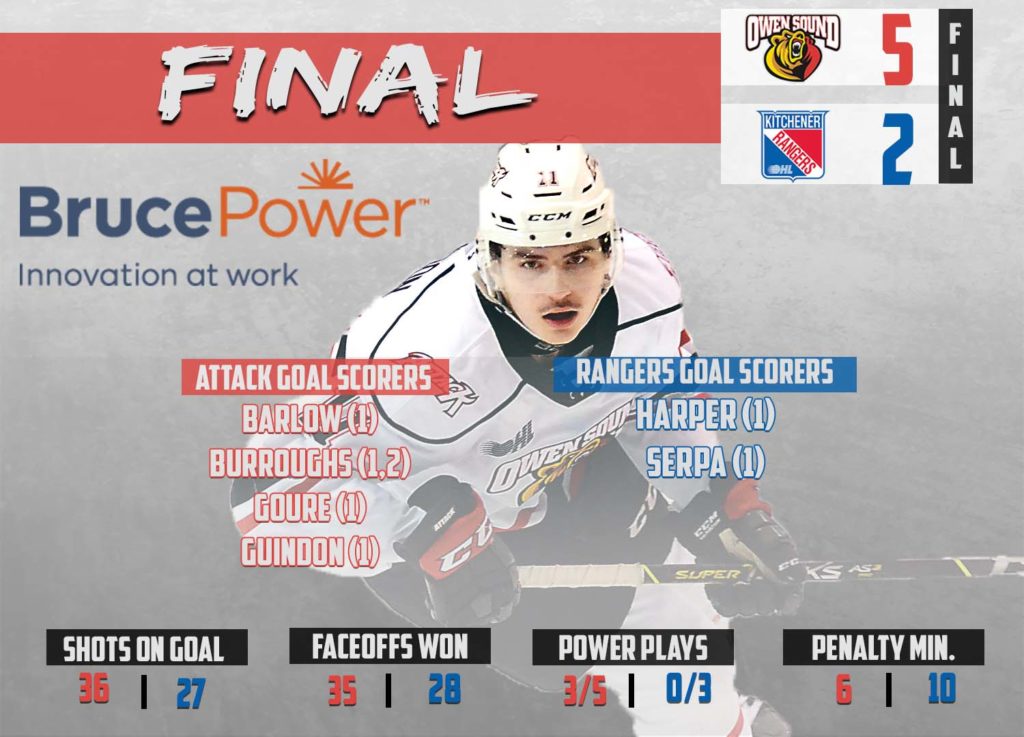 The Owen Sound Attack concluded their second game of a 3-in-3 weekend Friday night in Kitchener, and after a rough 8-0 loss Thursday night in Barrie, the Bears had a near perfect bounce back game. Owen Sound got an early goal from rookie Colby Barlow to help lead to a 5-2 road win.

Nick Chenard was back in the Attack net, and provided some comforting insurance throughout the night, even with rookie Corbin Votary putting in a strong start from Thursday night. Chenard stood tall and help the Attack to a perfect 3-for-3 on the penalty kill.

Owen Sound had a strong start in Barrie, but were unable to get that opening goal before being buried by the home Colts. Friday night, it was Barlow, who chipped home a loose puck in front of the Rangers net just under two minutes into the game  With getting that important first goal Owen Sound played with a greater air of confidence.

Even after the Rangers evened the game in the latter half of the period, it was a power play marker by Ethan Burroughs that gave the visiting Bears a lead heading into intermission.

Some unfortunate play early in the second period, lead to Rangers forward Joseph Serpa having a clear path to the net, where he buries his 5th of the year and evened the game at 2-2.

It was the Attack power play, which has been a sore spot all year, that came through just a few minutes after the home team tied the game. With a 5-on-3 advantage it was Deni Goure who made no mistake with an empty net, after Servac Petrovsky rose all Rangers defenders and goalie before sliding it over. It took just 26 seconds after the resulting puck drop, for Owen Sound to build the two goal lead. It was Cedrick Guindon who took the open ice and ripped a wrist shot past Rangers goalie Jackson Parsons fro his 11th of the year.

The third period then saw Chenard, aided by a strong team defence, hold off the Rangers push throughout the period, as the Attack gave the home team no clean or quality looks on net. The game was sealed in the final minute when Burroughs beat out an icing call, before tucking the puck into the empty cage.

Owen Sound will conclude their 3-in-3 weekend tomorrow night as they welcome the Guelph Storm to the Bayshore. Saturday will be the last night without fan attendance, but fans can cheer on the Attack on Rogers TV Grey County and OHL Live or listen on 560 CFOS Bears Radio.