Bears get Doubled up by Battalion in Battle of top Teams 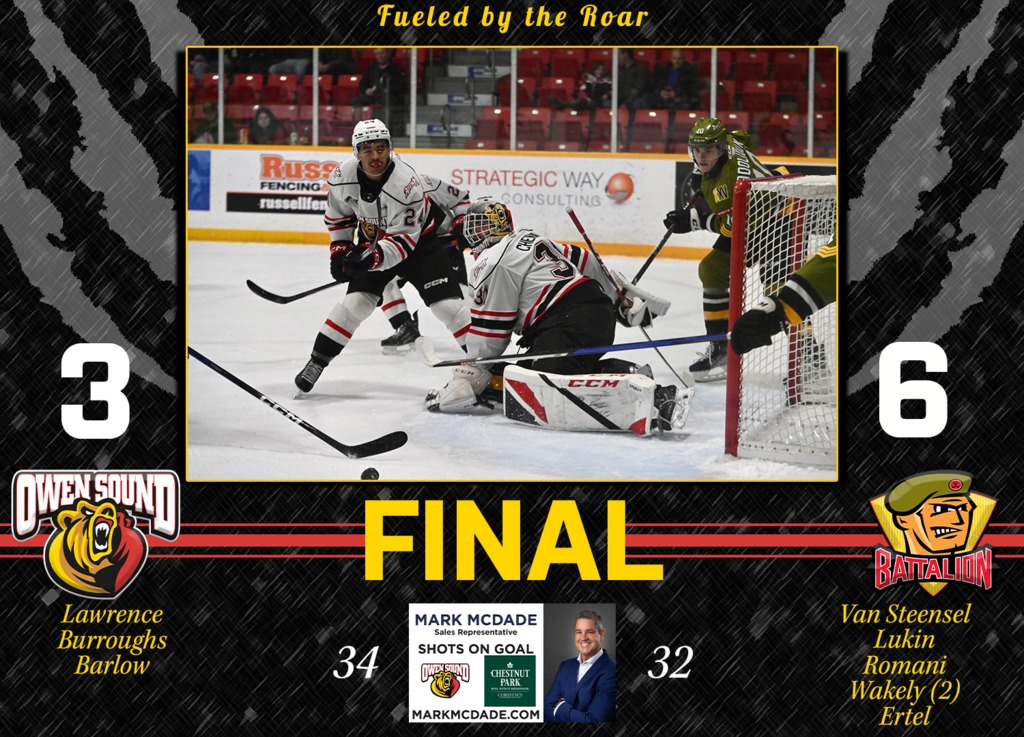 The win streak ends at four games, as the Owen Sound Attack got doubled up 6-3 by the North Bay Battalion Saturday night at the Bayshore.

It was another slow start to the game for Owen Sound, as they found themselves down 1-0, just 1:53 into the game. The period did not get much better for the Attack, as they struggled to ease the Battalion forechecking pressure, and create offence the other way. Ultimately, the Bears found themselves down by a 3-1 score after the first minutes, with the lone goal coming off the stick of Kaleb Lawrence, as he blasted a one-timer off a nice centring feed from Cedrick Guindon.

The middle frame did not start any better for Owen Sound, as Battalion forward Dalyn Wakely would go untouched into the middle of the ice to pick up a rebound off the end boards, before burying it top shelf, extending the Bears deficit to three. In the latter half of the period it looked as though Owen Sound was beginning to get some momentum on their side, as they began to control the pace of play.

It started with Ethan Burroughs cleaning up a rebound in tight off a Guindon shot, before the exclamation point of the period coming from captain Colby Barlow blowing a wrist shot past the North Bay goalie to pull the Attack to within a goal heading into the final period.

After and early period penalty kill, Barlow had a glorious opportunity to tie the game, as he was sent in all alone on a break away, but watched as the puck caught an edge and started to bounce as he got to the circles, forcing him to take a low risk shot. North Bay’s goalie stood tall, as he turned aside Barlow’s bid for a five-hole goal just over two minutes into the third period.

Owen Sound kept the pressure up, as they continues to search for the tying goal, but it was the Battalion who would capitalize on an odd-man rush chance. As the puck was chipped out, Guindon did a great job of taking away the first pass option on the back check, but it was Wakely who beat all other players up ice to be a second option, beating a sprawling Nick Chenard.

It was a battle of two top teams in each conference, but ultimately, the Attack fell short as the Battalion would seal the game with an empty netter, and dropping the Attack’s record to 3-3 against the Eastern Conference so far this season.

The Bears are back in action on the road next week, as they visit the Windsor Spitfires for a Wednesday night showdown. Owen Sound will look to get back in the win column as they face-off with the Spitfires for the second time this season.