Bears Look to Build on Momentum of First Win 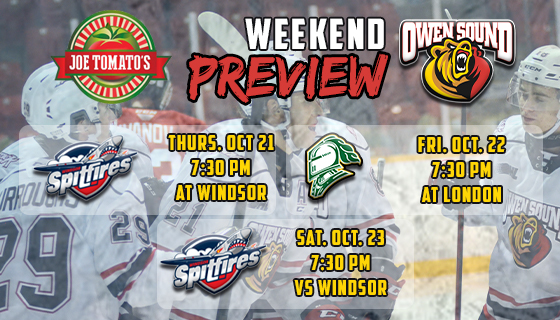 After collecting their first win of the season this past Saturday, the Owen Sound Attack look to build on that momentum. The Bears are scheduled for three games in three days this weekend, with two contests coming against the Windsor Spitfires.

The Attack will start the weekend on the road, as they travel to Windsor for their first meeting of the season against the Spitfires on Thursday night. The teams will then meet up again Saturday night, but this time at the Bayshore.

The Spitfires boast a strong, deep roster highlighted by captain Will Cuylle, a New York Rangers second round selection in 2020. Along side Cuylle, Dallas Stars 2021 first rounder, Wyatt Johnston can really press the offensive pace and will keep the Attack’s defence on their toes.

The Attack won two of the teams three meeting during the 2019-20 season, with the final game being a 3-2 overtime thriller, when former attack Kaleb Pearson scored the winning goal before sprinting off the ice.

The Friday night match-up, sees Owen Sound visit London for the second time of the young season. The game marks the third meeting between the Mid-west rivals, with the Knights taking the first two, in a pair of thrilling games. In the teams first meeting at Budweiser Gardens, the Attack held the lead late into the third period, but it was a power play marker by Knights veteran Gerard Keane that evened the game, before Sean McGurn tallied the lone shoot-out goal for the win.

All three games have puck drop set for 7:30 pm, with fans able to catch the Attack on the road on RogersTV and OHL Live, or listen on 560 CFOS Bear Radio. Tickets are avaiable for Saturday night, and can be purchased online or by calling or visiting the McVicar and McComb Sutton Reality Box Office.