BULLDOGS GROWL TOO MUCH FOR BEARS 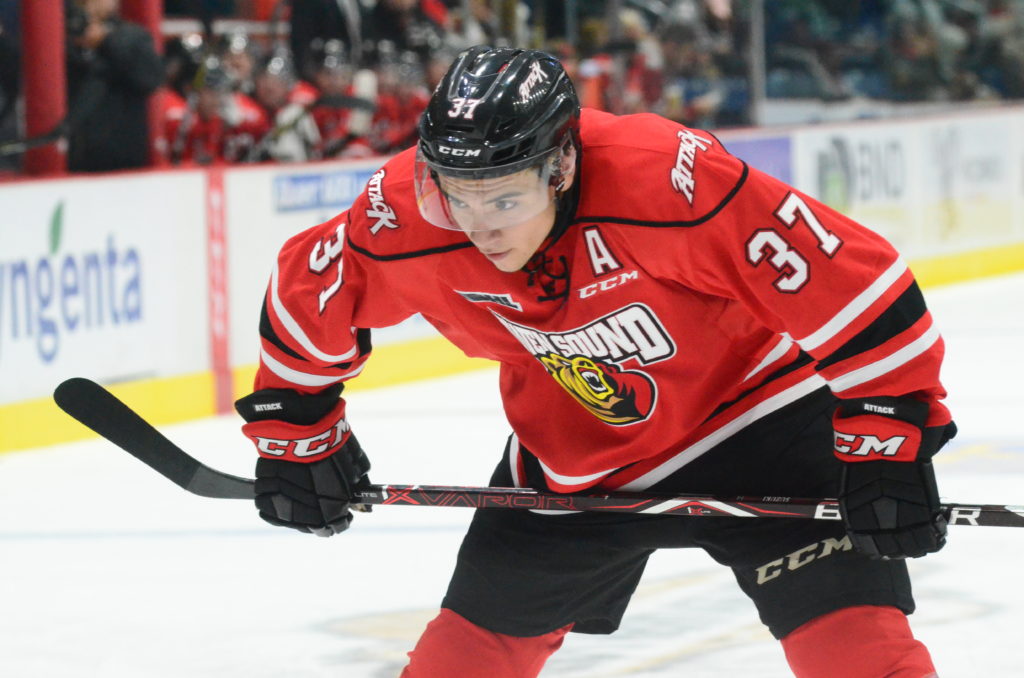 The Owen Sound Attack headed to Steeltown on Sunday afternoon in search of revenge for a 7-6 loss to the Hamilton Bulldogs back on October 17th as well as looking to close out a 3 games in two and a half day weekend on a positive note. Unfortunately, despite a good effort they were unable to capitalize on some early opportunities, falling 5-2 to the host Bulldogs. Suzuki and Hanockc had two points each in the loss.

A slow first period start for the Attack saw the Bulldogs apply pressure early resulting in a Kevin Hancock hooking penalty just 3 minutes into the game. The Attack penalty kill did their job, but unfortunately just after the penalty expired Arthur Kaliyev was able to bat a rebound out of the air and behind Andrew MacLean to make it 1-0 for the Bulldogs. The Attack pushed back creating pressure in the Bulldogs end but were unable to convert on scoring chances thanks to Bulldogs rookie net minder Zachary Roy. The score remained the same until Nicolas Mattinen was able to increase the Bulldogs lead to 2-0 with a well-placed shot from the high slot. Late in the period Markus Phillips was able to spring Nick Suzuki on a breakaway but once again it was Roy standing his ground and the period ended with the Bears trailing 2-0.

The start of the second period saw a role reversal of sorts with the Attack applying pressure in the Bulldogs end and forcing them into a penalty. It did not take long for Suzuki, Montreal Canadiens prospect, to burry the puck past the blocker of the Bulldogs goaltender cutting the lead in half. Less than two minutes later it was the Attack Captain once again finding the back of the net this time shorthanded. It was Attack overage forward Hancock who did the bulk of the work on the play winning the battle at the Attack blue line and feeding the puck to Suzuki, who made no mistake on the breakaway. Unfortunately, 3 minutes later a bad bounce resulted in a Brandon Saigeon goal restoring a goal lead for the Bulldogs. Bulldogs extended their lead to two while on the power play four minutes later when Arthur Kaliyev slid the puck underneath MacLean to make it 4-2 headed into the second break.

After an eventful first two periods, the Attack had hoped the offence to continue at least for themselves in the third. Unfortunately, the third turned into a very quiet period with both teams generating chances but nothing major happening until the Attack took a tripping penalty with 4 minutes to play in the game. The Bulldogs converted on a bounce off the backboards that Ben Garagan knocked in to make it 5-2 for the home team. This is how it would end.

The Attack are back in action next weekend for a doubleheader against the Erie Otters, first on Saturday, November 10th at 7:30pm and then again on Sunday, November 11th at 2pm.  Saturday is Military Appreciation Night at the Bayshore, where the Attack will be wearing commemorative themed jerseys, which will be auctioned online beginning the Monday after this game.  Sunday is the second Core Partners Group at Investment Planning Counsel Sunday, where the first 200 kids through the gates receive a voucher for a free small popcorn, kids have an opportunity to win one of two team autographed jerseys and a VIP meet and greet with their favourite player and can skate with the team after the game.  Anyone wishing to skate with the team must wear a pair of skates and any child under the age of 16 must wear a CSA approved helmet.

Three members of the Attack, Brady Lyle, Markus Phillips and Nick Suzuki will also be in action on Thursday, November 8th in Sarnia at the CIBC Canada Russia Series, where they will suit up for Team OHL in Game 3 of this series. The game can been seen live on Rogers Sportsnet beginning at 7pm EST.

This season of Attack hockey is presented by Lerners Personal Injury Lawyers.