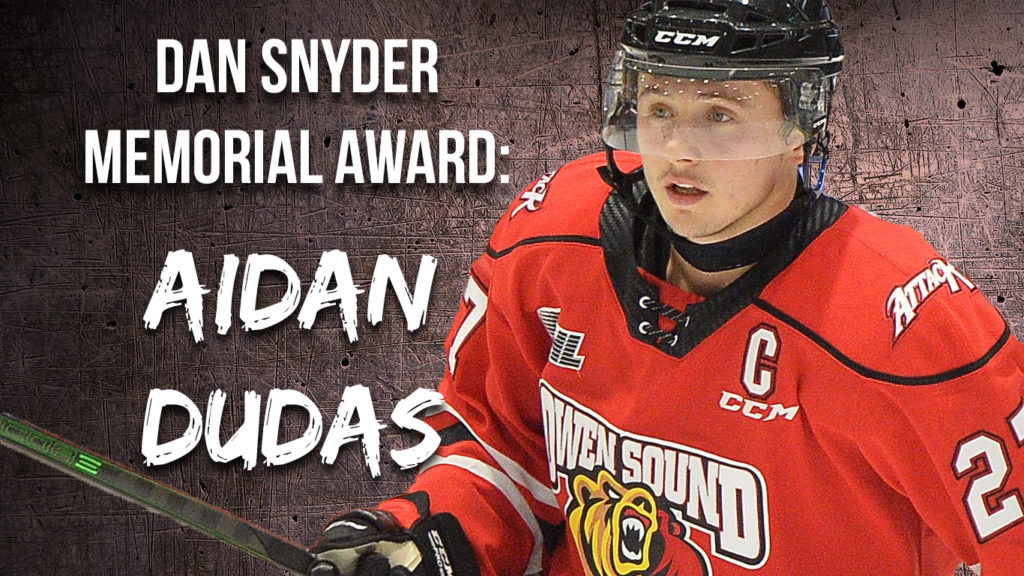 Aidan Dudas is the 2019/20 recipient of the Dan Snyder Memorial Award for Positive Outlook on the Owen Sound Attack.

Dan Snyder’s name will forever be entrenched in Owen Sound history as one of the most important players in franchise history. His smile was infectious and his attitude was an inspiration, which helped marry his name and the award for positive attitude and outlook in the dressing room.

Dudas was named captain of the team before the start of the campaign and led by example on the ice. A relentlessly hard worker, Dudas combined his nonstop motor with his can-do attitude to endear himself to Attack fans since his arrival in 2016. An up and down year for the forward, the Parry Sound, ON, native missed games due to an upper body injury in the first half of the season. Once thought of as a candidate to make the Canadian World Junior’s team, his status on the team was in doubt. Undeterred by the injury, Aidan continued to work hard and it paid off with an energy role on the national squad. Deployed in an energy role and tasked with penalty killing duties, Dudas excelled on the international stage and returned home with a gold medal.

Dudas’ spirit lifted the rest of the team during tough times this season, and his positive demeanour has been fully embraced by his teammates. The Owen Sound Attack are proud to once again honour Aidan Dudas with the Dan Snyder Memorial Award for Positive Outlook. This is the second year in a row for Dudas to win this trophy. Sean Durzi earned the recognition for the 2017/18 season.