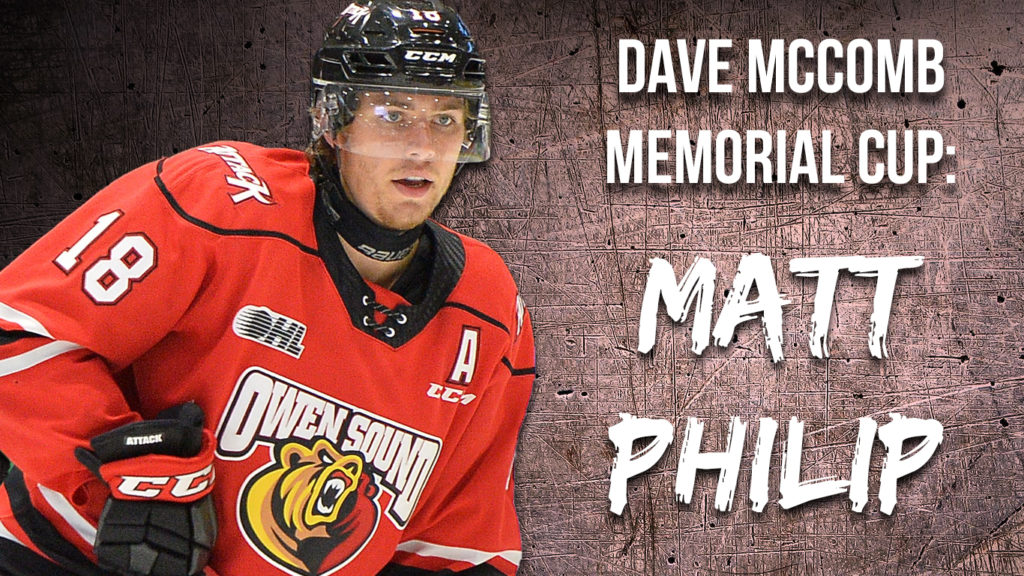 Philip was acquired last summer in a trade with the Niagara IceDogs, and immediately had an impact in the dressing room. Prior to the season, Philip was named part of the team’s leadership group and was assigned an ‘A’.

Philip’s leadership translated on the ice, putting up a career high 19 goals with 10 assists in 48 games. His season was cut short due to an upper body injury late in the year, but the Ilderton, ON native continued to make an impact in the dressing room, helping with game preparation.

The forward was also a leading presence at off-ice events, shaving his head for “Hockey Fights Cancer”, attending school visits with the Canadian Mental Health Association to promote the #TalkToday initiative and for all other events, Philip was one of the first to volunteer.

Attack Head Athletic Therapist Andy Brown says: “Matt is a selfless teammate who genuinely cares about everyone on his team. During his time recovering from a broken finger he volunteered to help the training staff at home and on the road. We told him he didn’t have to, but he did it because he just wanted to be involved, respected us as trainers and all the work it took to get things ready for a game. He immersed himself in every task we gave him just like he dedicated himself to a workout, a practice or a game. He was a great role model for all our young players on how to conduct themselves on and off the ice and he’s one of the best teammates I’ve been around in my time with the Attack.”

Attack General Manager Dale DeGray says he’s one of the best acquisitions he’s ever made: “He was a great addition, both on and off the ice. It can be hard to bring in a player for his overage season after he’s played somewhere else his entire career, but he was everything we asked for and more. We were all disappointed his season ended early, but you can’t say enough good things about Matt Philip. He’s a tremendous human being.”

The winger committed to play for St. Francis Xavier in Antigonish, Nova Scotia this fall where he will continue his hockey career.