Former Bear Shutouts Attack in First Game of 3-in-3 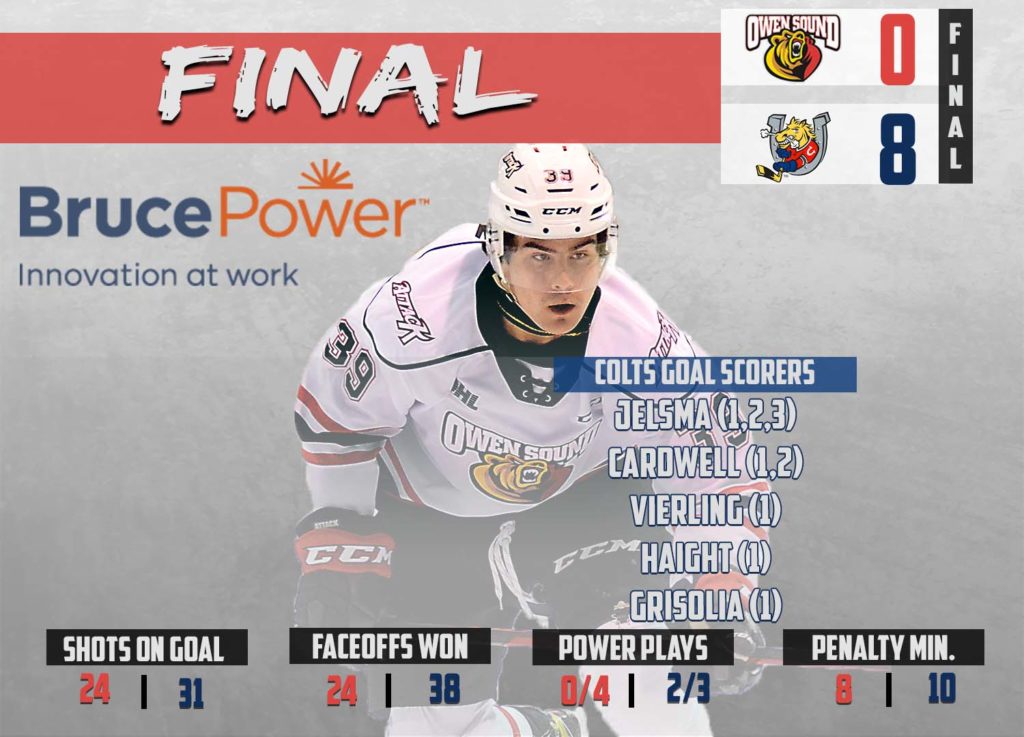 Last week the Owen Sound Attack traveled up Highway 26 to take on the Barrie Colts. It was a game that saw the home team take the lead on separate occasions, only for the Attack to fight back and earn a big victory on the road.

This week, as Owen Sound travelled back up Highway 26, it was a different story for the Bears, as they saw a former teammate in goalie Mack Guzda stop all 24 shots thrown at him, to help the Colts to a commanding 8-0 win.

The game started innocent enough, as both teams had jump and were each showing good battle trying to open the score. It was just past the five minute mark into the game when the Attack were awarded a power play, and a great opportunity to get on the board first. Unfortunately, for the visiting Bears it was the Colts, who took advantage of a mis-played puck by goalie Corbin Votary, to open the scoring with a shorthanded marker.

Special teams would continue to play a factor in the opening period as just over halfway through the first, the Colts were granted their own power play opportunity. Owen Sound looked like they were going to be able to kill of the penalty and keep the game at just 1-0, but a scramble in front of the net saw Colts forward Ethan Cardwell find a hole through Votary, making it 2-0 for Barrie heading into the intermission.

Owen Sound looked like they were going to battle the Colts to a stalemate in the second frame, and even start to take some momentum back from the home side. It was during 4-on-4 action that an unfortunate bounce had the puck find Colts rookie forward Beau Jelsma at the side of the net, with Votary caught on the other side. Barrie would then get their second on the power play late in the period to double their lead to 4-0 going into the final 20 minutes.

A pair of quick goals by the Colts to start the third quickly put any chance of a comeback to rest, as the Attack looked defeated and lifeless.

Owen Sound returns to action tomorrow night for game number two of the weekend 3-in-3, as they travel down to face-off against division rival Kitchener Rangers. The Attack have had success this year against the Rangers, holding a 2-1 lead in the season series.