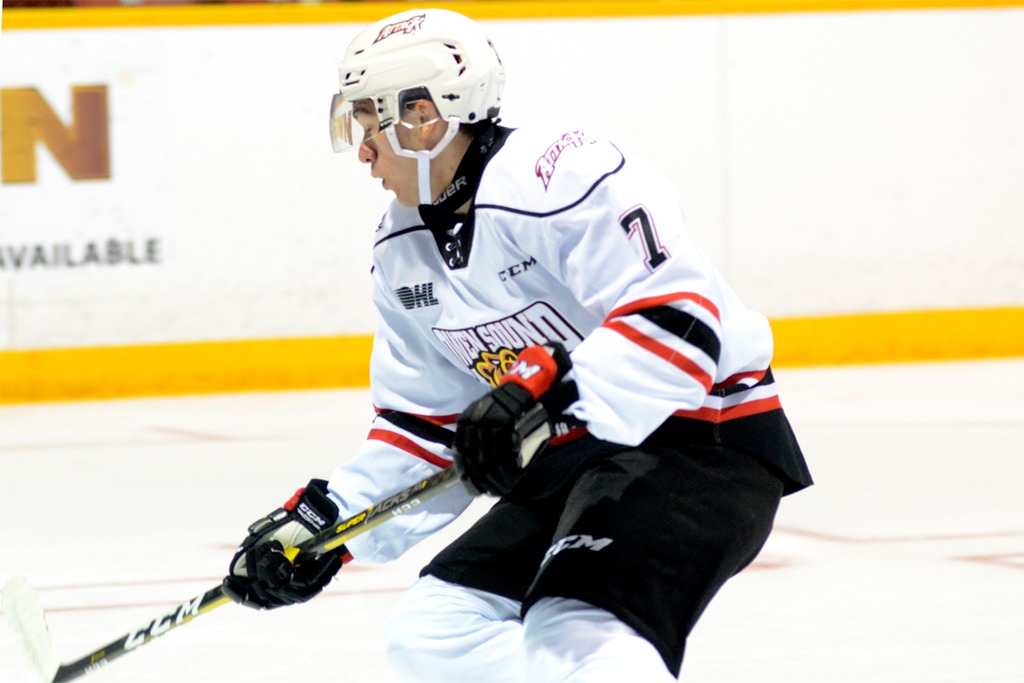 The Owen Sound Attack went to Kitchener to meet their midwest rivals for the first time this season. Last season in a schedule oddity, the teams didn’t meet until after the Christmas break. The teams are meeting twice in less than a week early this year, with a meeting at the Bayshore scheduled for next Wednesday. Mack Guzda received the start for the Attack and offseason acquisition Jacob Ingham was in goal for the Rangers.

Sergey Popov started things off well after almost scoring on a wraparound just ten seconds into the contest. The Attack came to play and they were flying in the first ten minutes of the game. Adam McMaster drove the net hard two minutes into the contest and Deni Goure was there to knock in the rebound for his first career OHL goal. The Attack continued the pressure and were leading in shots 11-2 before the halfway mark of the first. Owen Sound’s powerplay has been dominant this season, scoring on 9/20 attempts and it would remain hot in Kitchener. Carter Robertson would fire a shot from the point, Kaleb Pearson would tip it in front and the Attack would have an early 2-0 lead. The two goal advantage wouldn’t last for long as Rangers captain Riley Damiani would get loose on a breakaway and chip into the Attack lead, putting one past Guzda. The Bears continued to rifle the puck towards Ingham, putting up 21 shots in the first 20 minutes. Heading into the first intermission, Owen Sound would be up 2-1 on the scoreboard.

Kitchener started pushing back to begin the 2nd and had an early power play looking to tie things up. The old adage says your goaltender has to be your best penalty killer, and Guzda was up to the test. He repeatedly denied the Rangers and the Attack killed off the minor. Ingham put on as much of a show on the Attack’s 2nd power play of the night, making a big stretch to deny Daylon Groulx his fourth of the season. All of a sudden, the Rangers got hot and started finding the back of the net. First, Francesco Pinelli scored his 5th of the season to tie the game up at 2 apiece. With 6 minutes remaining in the period, Damiani scored his second of the night to give the Rangers a 3-2 lead with three straight goals scored. Kitchener further extended the lead after a deflection in front of the net led to the puck ending up behind Guzda. The Attack would head to the third period with plenty of work to do down 2.

The third period began with a flurry as Groulx opened the scoring just over a minute into the frame after Aidan Dudas forced a turnover in the offensive end. Groulx made no mistake on the one timer and the Attack cut the lead to one. Unfortunately, Kitchener responded in just six seconds when Greg Meireles scored in his return to the OHL to restore the Rangers lead to 2. Major chances were had for both teams on an Attack penalty kill. Guzda came up big in his own end and Dudas and Adam McMaster were robbed by Ingham going the other way. Riley Damiani would add another for his hat trick to make it a 6-3 game and diminish the hopes of an Attack comeback. The Bears wouldn’t give up, and Barret Kirwin scored with 34 seconds left to make it a 6-4 game. That would be it for scoring and the Attack fell to the Rangers 6-4. The shots on goal ended in favour of the Attack, 41-37.

The Hatten Home Building Centre Hardest Working Player of the Game was Aidan Dudas. The Three Stars of the Game were Brady Lyle, Riley Damiani and Jacob Ingham.

The Owen Sound Attack return to action tomorrow night against the Flint Firebirds at the Harry Lumley Bayshore Community Centre. Puck drop is scheduled for 7:30 p.m. Tickets are available at the MacVicar & McComb Remax Attack Box Office and online.