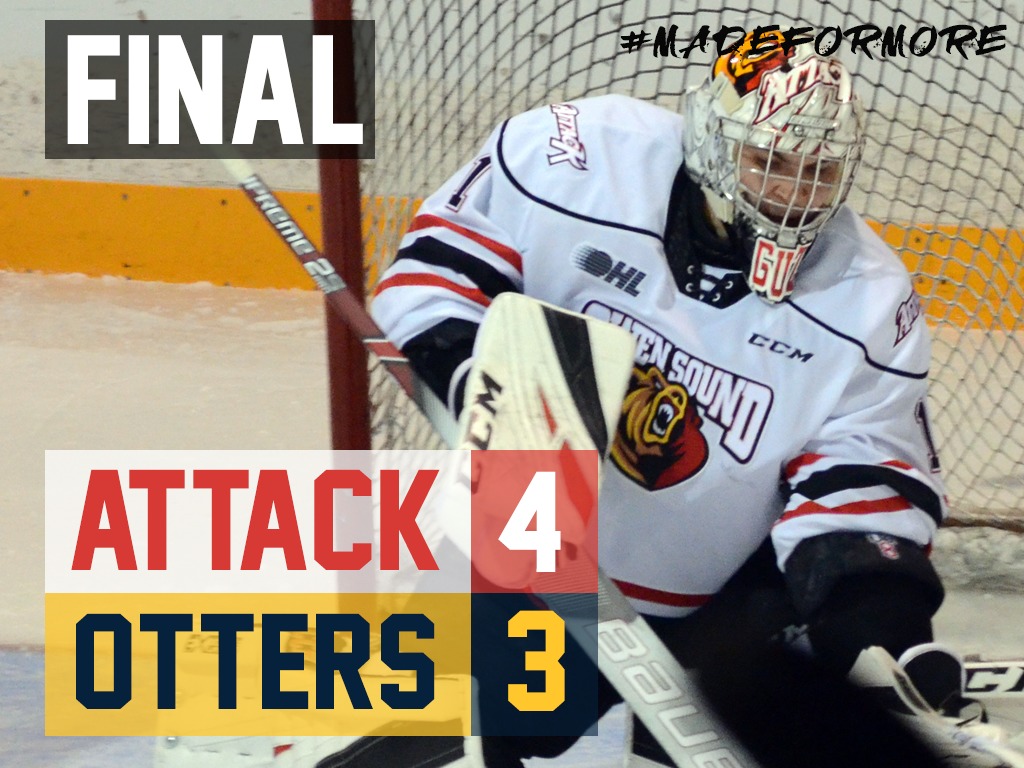 On a rare Sunday afternoon game at the Bayshore, the Owen Sound Attack welcomed the Erie Otters to the Scenic City. The IPC Sunday crowd was full of families excited for the matinee action, and the Attack aimed to send them home happy. Mack Guzda received the start once again in the Owen Sound net, while rookie Aidan Campbell received the nod for Erie.

Shots were hard to come by early in the first, but the Bears gave the fans plenty to cheer for with their physical play. Stepan Machacek laid a textbook hip check on an Otter in the opening minutes, and soon after Barret Kirwin delivered a solid hit in the defensive zone. Both teams continued their strong defensive work through the period and neither could find the back of the net, leading to a scoreless first twenty minutes in Owen Sound. Shots on goal after 1 were 9 for the Attack, 11 for the Otters.

If there was a dearth of offensive opportunities in the first, things changed in a hurry to begin the second. At 3:23 of the period, Brendan Hoffman opened the scoring with his 2nd of the season. Just 27 seconds later, Danial Singer scored his 6th of the year to give the Otters a 2-0 lead less than four minutes in. The Attack didn’t give up and immediately went to work to get back into the game. A minute later, Adam McMaster received the puck in the slot from Sergey Popov and went bardown to cut the deficit in half. Things settled down for a few minutes, but after the halfway point of the period, the Attack went back to work. Aidan Dudas continued his strong game and scored his 9th of the season to tie the game at 2 each after a nice give and go with Andrew Perrott. With 5:30 left in the period, Kirwin found Brady Lyle streaking out of the penalty box and Lyle finished on the breakaway to give the Attack their first lead of the night. The officials reviewed the goal for a possible offside, but it was declared a good goal. Guzda continued his strong play on the night, and after forty minutes he had turned away 31 of the 33 Otters shots to keep the Attack ahead 3-2 heading into the final period of regulation.

The Attack began the third looking to hold onto their slim lead, but rookie Brett Bressette had different ideas. He scored his first career OHL goal three minutes into the period and the score was evened once again. The Attack penalty kill was clicking this afternoon, stopping the first five Otter opportunities. Unfortunately, the Erie penalty kill was solid tonight as well, and they managed to shut down the Attack on all four of their chances with the man advantage, including a late power play with just over three minutes remaining. Neither team could find the deciding goal, so they would play for the extra point in overtime. Guzda turned away 44 of 47 Otters shots during regulation.

Guzda continued his tremendous night in overtime, making all six saves including a robbery with his glove hand with less than a minute in extra time. Owen Sound had attempts on the Erie net, but couldn’t score on Campbell and the game would go to a shootout.

In the first round of the shootout, Singer scored on Guzda while Lyle dangled around Campbell for the equalizer. In the second round, Golod was forced wide and Philip went high blocker to give the Attack the advantage. If Guzda could stop Sellan, the Attack would earn the extra point. Guzda stood tall for one final time this afternoon and the Attack took the victory over their Midwest Division rivals.

The Attack are back in action next Thursday as they travel to Barrie to take on the Colts. They follow it with a game on Friday in Guelph, and return home to the Bayshore on Saturday night against Shane Wright and the Kingston Frontenacs. Tickets are available at the MacVicar & McComb Sutton Sound Realty Attack Box Office and online.