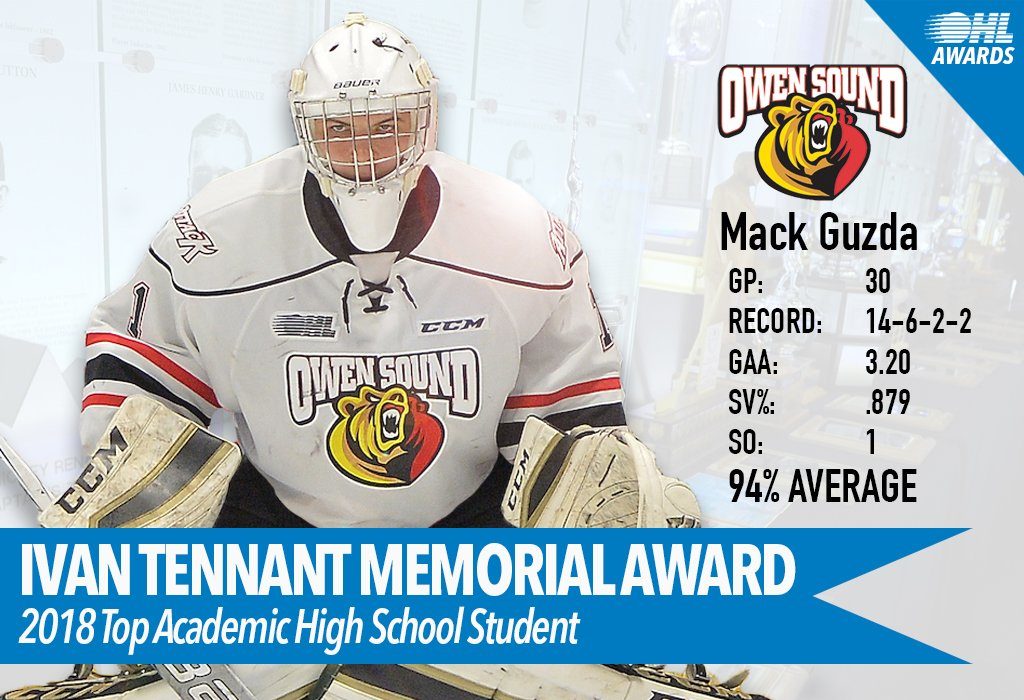 Barrett Hayton of the Sault Ste. Marie Greyhounds is the recipient of the Bobby Smith Trophy as Scholastic Player of the Year, with Stephen Gibson of the Mississauga Steelheads earning the Roger Neilson Memorial Award as the Top Post-Secondary School Student, and Mack Guzda of the Owen Sound Attack named the Ivan Tennant Memorial Award recipient for Top High School Student.

All three players will be formally presented with their awards at the annual OHL Awards Ceremony on Wednesday June 6.  Hayton will be the OHL’s nominee for CHL Scholastic Player of the Year which will be announced on Saturday May 26 as part of the events at the 2018 Mastercard Memorial Cup in Regina.

Barrett Hayton earns OHL Scholastic Player of the Year honours for his achievements as a Grade 12 student at Superior Heights combined with his on-ice excellence for the Greyhounds.  This season he obtained an overall average of 87% studying University level courses in Math – Advanced Functions, Math – Data Management, Biology, Chemistry, English, and Recreation & Healthy Active Living Leadership, while producing 60 points in 63 regular season games.

“It is an incredible honour to win this award,” said Hayton. “It would not have been possible without the support of the Soo Greyhounds organization and Superior Heights School. I take pride both on and off the ice to develop not only as a player but also as a person.”

The 17-year-old from Peterborough, Ont., scored 21 goals and 39 assists this season contributing to a banner season in Sault Ste. Marie where the club finished atop the OHL’s regular season standings with a record 55 wins and 116 points.  The first round pick in the 2016 OHL Priority Selection won gold with Canada at the 2017 Ivan Hlinka Memorial Cup and is now a projected first round pick in the 2018 NHL Draft and was listed ninth among North American skaters in NHL Central Scouting’s final rankings.

“We wish to congratulate Barrett on being awarded the Bobby Smith Trophy,” said Greyhounds General Manager Kyle Raftis. “As an organization, we couldn’t be more proud of Barrett. He embodies all of the qualities you wish for in a Greyhound. Known for his dedicated and disciplined personality, Barrett’s academic work ethic is synonymous with his devotion to the game. Barrett demonstrates that you can have tremendous success on the ice, and still maximize your academic potential.”

Each year the Bobby Smith Trophy is presented to the OHL Scholastic Player of the year who best combines high standards of play and academic excellence.  The trophy is in honour of Bobby Smith, a former Ottawa 67’s star who exhibited a standard of excellence in both of these areas.  First presented in 1980, Hayton is the third member of the Greyhounds to receive the award following Darnell Nurse (2013) and Jake McCracken (1997).  Past recipients include three-time winner Dustin Brown (Guelph 2001-03), Steven Stamkos (Sarnia 2007), Matt Duchene (Brampton 2009), Dougie Hamilton (Niagara 2011), back-to-back winner Connor McDavid (Erie 2014-15), Nicolas Hague (Mississauga 2016), and Sasha Chmelevski (Ottawa 2017).

Runner-up for the award this season was fellow 2018 NHL Draft prospect Ty Dellandrea of the Flint Firebirds, with finalists that include top prospects Kevin Bahl of the Ottawa 67’s and Aidan Dudas of the Owen Sound Attack.

Stephen Gibson earns his second straight academic honour for his post-secondary studies at Ryerson University excelling once again in his Business courses that include Business Information Systems, Business Law, Business Statistics, Intro to Global Management, Intro to Professional Communication, and Public Relations Principles.  This also marks the third straight season the award has been earned by a Steelheads player with Damian Bourne receiving the honour in 2016.

“I am very honoured to once again be the recipient of the Roger Neilson Memorial Award,” said Gibson. “I would like to thank Elliott Kerr, James Richmond, and the entire Mississauga Steelheads organization for allowing me to pursue my hockey goals while supporting my academic endeavours. I would also like to thank the Ontario Hockey League for creating an environment that allows players to further their education while they are playing in the league. The OHL is the best developmental hockey league in the world, while providing players every resource needed to be successful off the ice.”

The 21-year-old from Kitchener, Ont., finished his five-year OHL tenure with the Steelheads as the club’s leader in career games played with 263 after being chosen in the seventh round of the 2013 OHL Priority Selection.  The overage defenceman recorded one goal and nine assists for 10 points playing in all 68 regular season games in 2017-18.

“Our Steelheads family are very proud of Stephen and this prestigious accomplishment,” said Steelheads General Manager and Head Coach James Richmond. “He is a super person both on and off the ice and we’re happy that he is once again being recognized for his dedication to not only his athletic performance but also for his academic achievements. Congratulations Stephen and we wish you continued success!”

The Roger Neilson Memorial Award is named in honour of the Hall of Fame Coach who served behind the Peterborough Petes bench in the late 1960’s and early 1970’s.  Neilson, a former high school teacher, was a pioneer in stressing the importance of education to all of his players.  First presented in 2005, fellow two-time winners include Danny Battochio (Ottawa 2005-06) and Derek Lanoue (Windsor 2010-11).

Finalists for the award include William Sirman of the Windsor Spitfires and Jonathan Yantsis of the Kitchener Rangers.

“It is a great honour to be the recipient of this year’s Ivan Tennant Award,” said Guzda. “I’m extremely thankful for our education consultant, coaches, management, and for the ownership group that supply any extra help we might need to grow academically. I feel extremely fortunate to be able to excel in the classroom while competing in the Ontario Hockey League.”

The 17-year-old from Knoxville, Tennessee, played 30 games between-the-pipes for the Attack this season after being chosen by the club in the second round of the 2017 OHL Priority Selection.  Named to the First All-Rookie Team, Guzda carried an overall record of 14-6-2-2 with one shutout along with a goals-against-average of 3.20 and save percentage of .879.  His 14 victories set a new Attack mark for 16-year-old netminders

“Mack’s worth ethic in the classroom this year was second to none and we couldn’t be prouder that he’s being honoured for his academic excellence,” said Attack General Manager Dale DeGray. “The Attack have always placed a premium on education, and this is a testament to Mack, our education consultant Sarah Rowe, and the fantastic team of tutors that we have to help our players become well rounded student athletes.”

The Ivan Tennant Memorial Award is given to the Top Academic High School Player and is named in honour of Ivan Tennant, who spent a lifetime combining hockey and education.  He was the Kitchener Rangers’ Education Consultant for 20 years and a key figure on the OHL’s Education Consultant’s Committee.  First presented in 2005, Guzda is the second member of the Attack to receive the award following Andrew Shorkey in 2007.  Past recipients also include brothers Matt and Adam Pelech (Sarnia 2005 and Erie 2012), Freddie and Dougie Hamilton (Niagara 2009 and 2010), and recent winners Stephen Dhillon (Niagara 2015), Kyle Keyser (Flint 2016), and Quinn Hanna (Guelph 2017).

Finalists for the award include Billy Moskal of the London Knights and Isaac Walker of the Mississauga Steelheads.

All 20 of the OHL’s member clubs provide nominees for each award with the Bobby Smith Trophy nominees representing the 2017-18 OHL Scholastic Team: