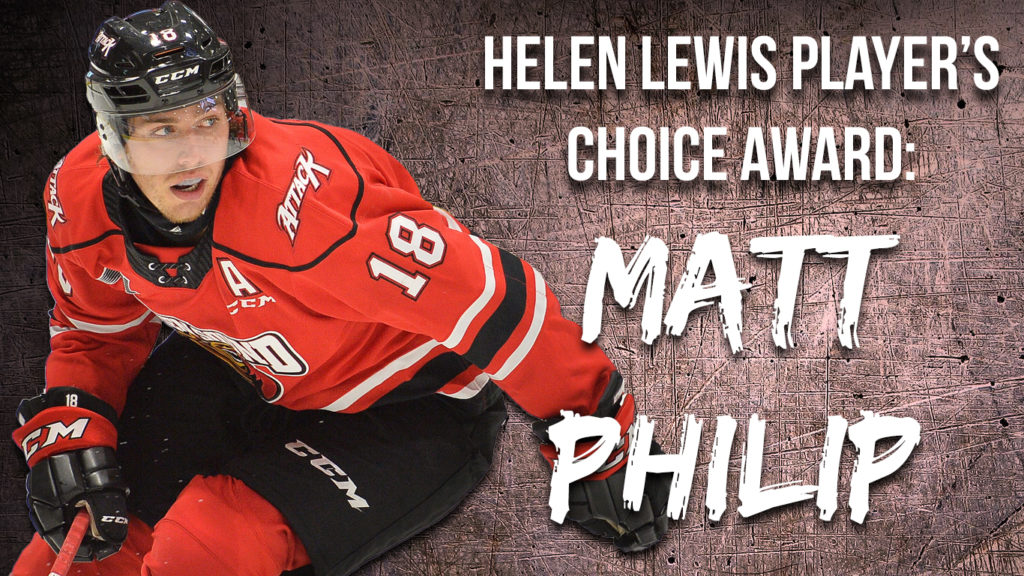 As selected by his teammates, Attack forward Matt Philip is the recipient of the Helen Lewis Player’s Choice Award for the 2019/20 season.

Voted by his teammates, this player shows dedication to the team night after night, day after day. Not just showing up for game nights, the winner of the Helen Lewis award goes above and beyond in practice, meetings, and community events. Named after dedicated Attack fan Helen Lewis, this is the 4th time the award has been given out. It has previously been won by Trent Bourque, Sean Durzi and Jonah Gadjovich.

Matt Philip did it all in his only season with the Owen Sound Attack, providing goals, work on the penalty kill unit and a constant presence at team functions & community events. Philip scored a career high 19 goals and added 10 assists on the season. His season ended early due to injury, but the forward from Ilderton continued to help in the room, assisting the equipment staff with pregame preparations.

Attack captain Aidan Dudas says: “It was so noticeable even when Philly got hurt how dedicated he was to the team. He would stay all day during a game day and help the trainers out with the room, help the coaches with video if needed, he showed all of us the definition of dedication to the team and going above and beyond for the team.” Brady Lyle agrees: “Even though he couldn’t finish the year playing, he was still a part of the team and still managed to make an impact.”

Mark Woolley says he was the definition of an unselfish player: “He was always putting the team before himself. He got hurt blocking a shot, putting his body on the line. He’d always do anything for the boys.” Carter Robertson thought of Philip as a leader in the room: “He was always team first and a great room guy. Even when he was injured he was the most positive guy on the team and kept us all together. He was the dad of the team.”

Philip has committed to play for St. Francis Xavier next year in Antigonish, Nova Scotia.