Hot Streak For Pearson Continues In 5-1 Win Over Hamilton 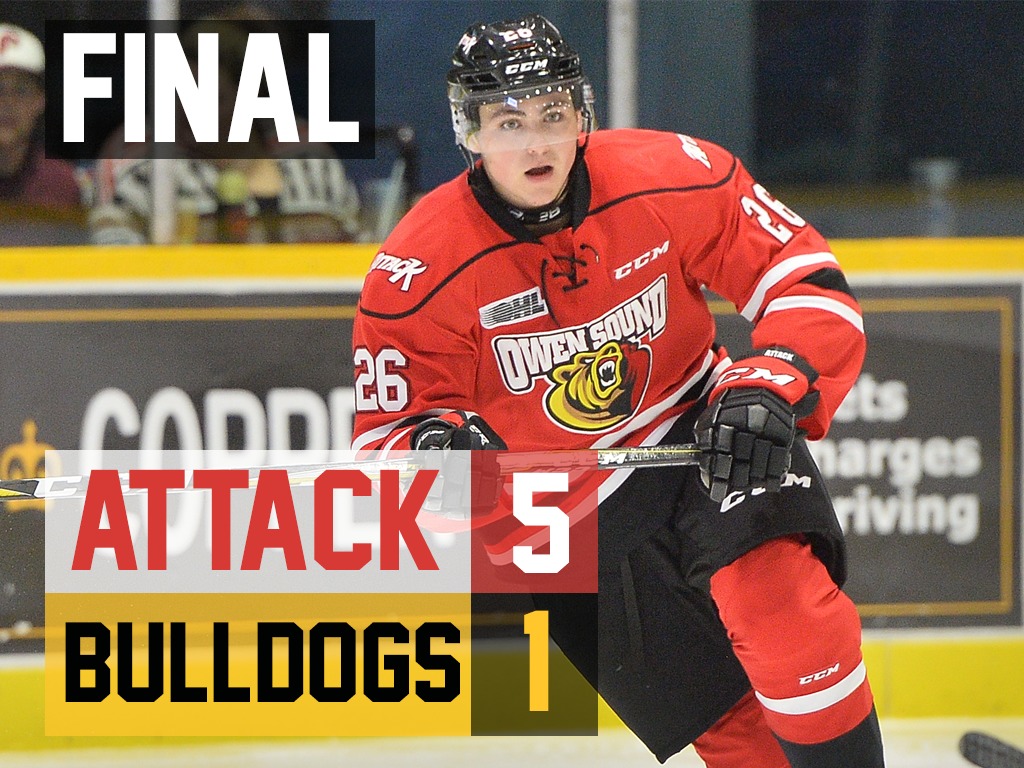 Kaleb Pearson continued his hot streak, picking up four points tonight as Owen Sound won their 4th consecutive game with a 5-1 win over the Hamilton Bulldogs. Pearson notched two markers for 24 on the season and added two assists for 10 points in his last three games including seven goals.

Owen Sound made their return to the Bayshore tonight after over ten days away to meet the Hamilton Bulldogs on Wednesday. The game marked the start of a busy week for the Attack, with four games scheduled for six days beginning this evening and meetings with Guelph, Peterborough and Oshawa coming up. Stepan Machacek made his return from suspension to join the lineup while Griffin Wilson and Matt Philip continued to miss time with upper body injuries. Mack Guzda received the start for Alan Letang’s squad and Marco Costantini was in net for the visitors.

The Attack hit the ice looking for their fourth consecutive win as they continued their push for playoff positioning in the crowded Western Conference. The two teams were meeting for the first time this season and spent the first few minutes feeling each other out, with the Attack leading in shots 3-2 after the first five minutes. It was the Sergey Popov line working their magic once again to open the scoring as he took a picture perfect feed from Barret Kirwin to roof one past Costantini and put the Attack up 1-0 at the 9:20 mark of the 1st. A few minutes later, Kaleb Pearson continued his recent tear by firing a laser past the Hamilton netminder for his 23rd of the season and his 6th goal in the past 3 games. The Bulldogs pushed back to end the period, but Guzda stood tall and turned away all 8 shots in the period to head to the intermission up 2-0. Owen Sound put up 17 shots on the http://MarkMcDade.com shots on goal score clock.

Holding a 2-0 lead to start the frame, Owen Sound looked to build on their promising opening period. The Attack earned a power play at the six minute mark and it took them just eight seconds to capitalize. Popov and Pearson earned their third point of the night setting up Carter Robertson’s 9th of the season to put the Attack up 3-0. A minute later, Logan LeSage used his speed to get away from a defender in the Hamilton end, Kaleb Lawrence used his large frame to carve out some space in front of the net and after whacking his 5th of the year past Costantini the Bears led 4-0. Zachary Roy took over in the Hamilton net after the 4th marker. Owen Sound continued to push the play in the period, outshooting the Bulldogs 13-4 and would head to the third up 4-0.

Kaleb Pearson continued his tear a minute into the third to put Owen Sound up 5-0. After forcing a turnover at the Attack blueline, Pearson skated down the loose puck before going between his legs for his 2nd of the night and 7th in his past three games. The 24th of the year for the St. Marys native was an unassisted effort. The Attack looked to be skating towards a shutout until Lawson Sherk scored his 3rd of the season with five minutes remaining to put the Bulldogs on the board. Guzda would turn away the remaining shots as Owen Sound won their fourth consecutive game. The final http://MarkMcDade.com Shots on Goal were in Owen Sound’s favour, 47-26.

The Attack return to action on Friday night as they head to Guelph to meet the Storm. The game can be seen on Rogers Grey County, heard on 560 CFOS Bear Radio and streamed online at OHLLive.com. Owen Sound returns to the Bayshore on Saturday night for the first annual Pucks and Paddles night in support of Camp Presqu’ile. Tickets are available at the MacVicar & McComb Sutton Realty Attack Box Office and online.