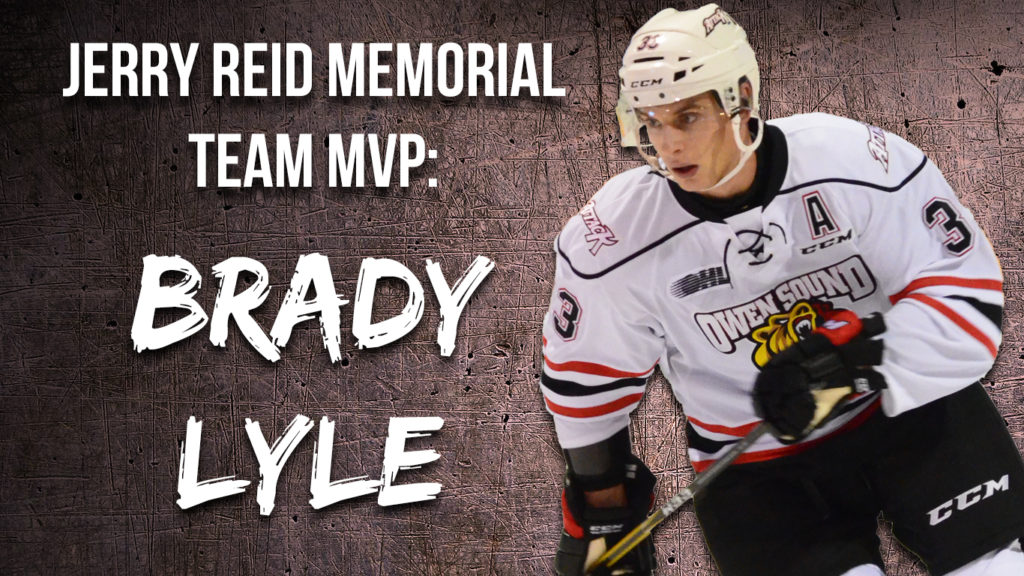 Lyle wins the Jerry Reid Memorial Award. Inducted into the Owen Sound Sports Hall of Fame in 1982, Jerry Reid played professional hockey with the Indianapolis Capitals and in his 1st ever professional game, Jerry scored a hat-trick. Also captaining the Owen Sound Mercury’s in the 1950s, Jerry is a proud part of the Scenic City’s hockey history.

In 62 games this season, Lyle found the back of the net 22 times and added 43 assists for 65 points, good for 2nd on the team in scoring. The overager was rewarded for his production with a professional contract from the Providence Bruins of the AHL.

Attack assistant coach Jordan Hill is proud of his defenseman: “He’s a professional. He took games over for us this season and he was a big part of our success. The Bruins are lucky to have him as part of their organization. The sky’s the limit for Brady, and we’re going to miss him in Owen Sound.”

Acquired in 2017 from the North Bay Battalion, Brady Lyle leaves the Owen Sound Attack as the all-time goals scored leader by a defenseman in franchise history. The 18th overall selection in the 2015 OHL Draft, Lyle played 295 games in his junior career and was on pace to finish with 300 before the cancellation of the season. Lyle finishes his OHL career with 49 goals scored and 126 assists for 175 total points.