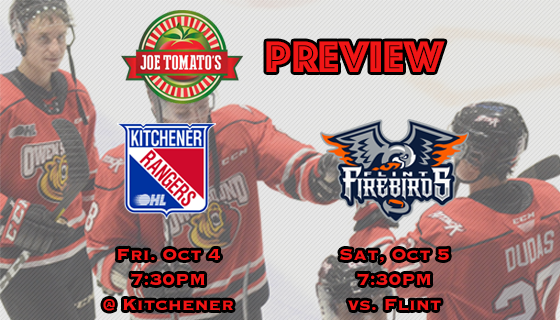 Week Three of the OHL season brings two new opponents into the Attack schedule, with a Friday night match in Kitchener before returning to the cozy confines of the Bayshore for a Saturday evening contest against the Flint Firebirds.

This season, the Attack will meet their Midwest division rivals in Kitchener before the Christmas break. The first of 8 meetings this campaign takes place Friday night at the Kitchener Memorial Auditorium, with puck drop scheduled for 7:30 p.m.

The Rangers return much of their roster from last year, with Riley Damiani, Greg Meireles, and 50-goal scorer Jonathan Yantsis leading the charge. On the backend, Donovan Sebrango and Michael Vukojevic are back for another season with reinforcements provided by import draft picks Axel Bergkvist and Ville Ottavainen. During the offseason, Kitchener acquired LA Kings draft pick Jacob Ingham to be their #1 goaltender. He’s backed up by Owen Sound native Lucas Pfeil.

Owen Sound will meet the Flint Firebirds for the first time this year on Saturday night at the Bayshore. Owen Sound native Connor Roberts is healthy and playing well for a Firebirds team that is looking to make a push in the standings this season and compete for a playoff spot.

Ty Dellandrea was recently returned to the OHL by the Dallas Stars, and he’ll add firepower to a Firebirds offense that includes Belarussian import Evgeniy Oksentyuk, Evan Vierling and 2nd overall selection in this year’s OHL draft, Brennan Othmann. OHL champion Anthony Popovich was acquired during the summer to bolster the goaltending situation in Michigan.

The Attack will be going head to head with both teams this weekend as they compete in a crowded Western Conference. The games will be available to watch on Rogers Grey County Channel 53 and available to stream on OHL Live. Fred Wallace will bring the play by play from Kitchener on Friday night with 560 CFOS Bear Radio.

Tickets are still available for Saturday’s match against the Flint Firebirds. You can get your tickets online, over the phone by calling 519-371-7452 or at the MacVicar & McComb Remax Attack Box Office.