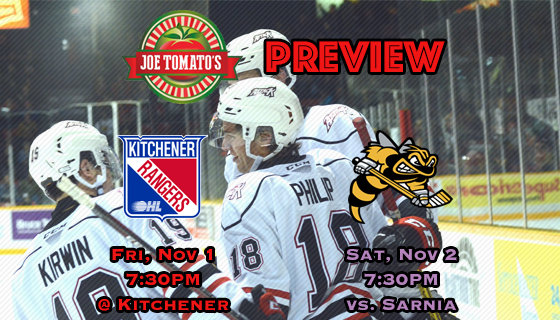 After starting the week with a tough overtime loss to the Western Conference leading Flint Firebirds, the Owen Sound Attack have a chance to rebound with games against the Kitchener Rangers and Sarnia Sting.

The Attack start the weekend on the road with a trip to the Kitchener Memorial Auditorium on Friday night. The Rangers won the first meeting between the two teams on October 4th, but the Bears got their revenge with a home win five days later. Owen Sound currently leads the Midwest division by two points over the Rangers and Otters. Riley Damiani and Liam Hawel lead the Rangers offense with 15 and 14 points respectively, while Jacob Ingham has been one of the league’s top goaltenders thus far with a .916 save percentage.

The Bayshore will be clad in lavender Saturday night for Hockey Fights Cancer against the Sarnia Sting. The puck drop is scheduled for 7:30 p.m. as the Bears will be wearing special H0ckey Fights Cancer themed jerseys to raise money for the Canadian Cancer Society. Other special game night activities include a puck toss, intermission games, a silent auction and more. The Sarnia Sting have rebounded from a poor start to the year led by overage forward Sean Josling. Josling has recorded 27 points in just 13 games, good for 3rd in the OHL this year.

Tickets to Saturday night’s game are limited but still available at the MacVicar & McComb Remax Attack Box Office and online.