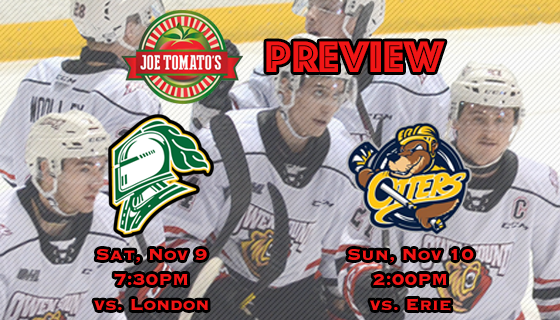 This weekend the Attack host a couple of Midwest Division games, first on Saturday night against the rival London Knights, and then a Sunday afternoon game against the Erie Otters. The Attack look to hold on to first place in the tight Midwest division race with two important games on the schedule this weekend.

On Saturday night the Attack host the Knights on Military Appreciation Night at the Bayshore. The Attack will be wearing commemorative jerseys which will be auctioned off at a later date this season. There will also be a ceremony prior to the game.

Saturday night is also Woolley’s Warriors’s night where fans are encouraged to bring household items to donate in hopes of raising funds to send diabetic kids to D-camps. There will also be a silent auction on the south concourse taking place throughout the game where you can learn about Mark Woolley’s foundation and even win an autographed stick from the Attack defenceman.  For a list of acceptable household items to donate, click here.

In their only match up with the Knights so far this season, the Attack came out with a 5-4 victory thanks to Barret Kirwin’s OT winner, and Mack Guzda’s 47 save performance. Currently the Knights are sitting 3rd in the Midwest with a record of 8-4-1-1 good for 18 points, only 2 points behind the division leading Attack who have 20. The Knights are being lead by Washington Capitals prospect Connor McMichael who has put up 34 points in 14 games, which is second in the OHL behind only Arthur Kaliyev of Hamilton. Puck drop for Saturday night is scheduled for 7:30.

On Sunday the Otters roll into town for another important Midwest showdown. Prior to their Saturday night game against the Battalion, the Otters sit one point behind the Attack for first place in the division. Jamie Drysdale of the Otters has been hot to start the season as the second year defenceman sits fourth in points among OHL defencemen with 19 points through 17 games. Leading the Otters in scoring is Maxim Golod, a 13th round pick in 2016, with 24 points through 17 games.

This Sunday is the first IPC Sunday of the season which gives fans the chance to skate with the Attack following the game, and receive autographs from their favourite players. Fans are reminded that everyone must wear skates to be allowed on the ice surface, and anyone under the age of 16 will be required to wear a CSA approved helmet.

Tickets are still available for the pair of weekend contests, they can be purchased at the MacVicar & McComb Sutton Realty Attack Box Office, online at www.attackhockey.com, or by calling 519-371-7452.